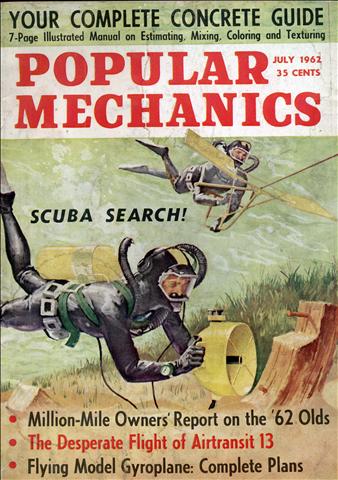 One-Man Antitank Missile Compact enough for the ordinary infantryman to carry into battle on his back, an antitank-missile system is simple enough for a nonspecialist to operate and powerful enough to destroy any tank. The 44-pound missile assembly (bottom) is easy to set up and ready to fire at all times. The operator (top), using […]
BUBBLE TROUBLE ON TAP

By Volta Torrey We use 320 billion gallons of water a day but by 1970 pollutants may cut our ration NOT LONG AGO, a woman in Long Island, N.Y., was filling a cooking pot with water from her kitchen tap. Suddenly the pot foamed over with crisp, white suds. These suds, she knew, were caused by synthetic detergents that had drifted over from neighborhood septic tanks and were adulterating her well. Since the sudsy water is distasteful, she uses tap water only for cooking and washing. She buys drinking water in bottles in another town for herself and her family.
He Sculpts Rail Spikes

Discarded railroad spikes are turned into iron cartoons by Howard Munce, a New York art director who finds his raw material along the roadbed of the railroad near his Connecticut home. He uses a handsaw, file, welding torch, forge and anvil to fashion amusing figures that also have merit as pieces of sculpture.
Strange Shapes for Play

Unconventional and modern playground equipment has been developed in Ulm, Germany, by architect Joachim Kimpel. A 10-year study of children's methods and behavior at play by the architect, a gardener and a psychologist led to the redesigning of recreational equipment for climbing, spinning, balancing and swinging.
Electronically New...

STAINLESS-STEEL KITCHEN CONSOLE has a fluorescent light built directly above the sink which illuminates the entire sink area and eliminates shadows. An electrical outlet is located at each end of the control pedestal containing the light. The console has a built-in spray under the water faucet. When control is set for "flood" or "spray," the spray goes automatically into action, leaving the housewife's hands free. Also included are remote control pop-up drains, garbage disposer, vegetable basket and cutting board. Deluxe model has power unit, food mixer, blender and electric knife sharpener. Available in five models; prices range from $271 to $443. This steel sink unit is made by Elkay Mfg. Co., 2700 S. 17th Ave., Broadview, Ill.
Serious Monkey Business

To study the effects of radiation at various levels of fatigue, monkeys are exercised inside a rotating, plastic sphere and studied by researchers at the University of Tennessee medical school. Four feet in diameter, the sphere is turned constantly at three miles per hour or faster. The monkeys are put on this treadmill after slight exposure to radiation and studied by the scientists.
STREET SCENE, TOKYO STYLE

By Elliot H. McCleary TRAFFIC IN TOKYO, the world's largest city (population: 10 million), is, to put it mildly, dense, wild, fast, and furious. The very diversity of vehicles, as well as their number, is startling. There are automobiles of varying shapes and sizes— Japanese, French, German, an occasional, looming Chevy or Plymouth. Coveys of goggled motorcyclists thunder their motors at intersections, roar away in blue smoke when the light changes. There are three-wheeled trucks guided inside by handle bars.
CHILD SAVER

CHILD SAVER SEAT BELTS, if used in every car, could save at least 5,000 lives a year … reduce injuries by one-third, according to the National Safety Council. Many of those saved from injury or death would be youngsters—for drivers kill and cripple more children than any disease. Protect your children . . . drive […]
French Begin Development of Supersonic Airliner

At this point in development the French aircraft was a separate project from the British one. They merged the two programs later in year. I have to say, Concorde is certainly a better name than Super Caravelle. French Begin Development of Supersonic Airliner Funds have been appropriated by the French government to develop a Mach […]
Cover-Up for Fire

Cover-Up for Fire Enclosed in a convenient stand-up case attached to the wall, a fireproof blanket can be yanked out and wrapped around an industrial worker whose clothes are in flames. A loop of rope extends outside the case. The person on fire can pull this, whirl to the left and wrap himself tightly in […]