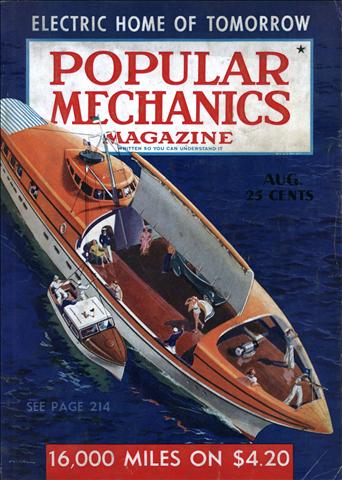 Television Picture Attachment Uses Any A.C. Set for Sound Utilizing the chassis and loud speaker of any a.c.-operated radio for accompanying sound, this table-model attachment reproduces television images for direct viewing. It plugs into your regular receiver in the same manner that you would connect a record player. The picture is 3-3/8 in. by 4-3/8 […]
Portable Photo Copier Folds Like a Trunk When Carried

Portable Photo Copier Folds Like a Trunk When Carried Entirely self-contained, a portable photo copying machine now on the market is complete with camera having an adjustable focus, spool of sensitized paper, built-in severing device that cuts paper to proper size, and all the developing chemicals. When folded for carrying it closes up like a […]
Receiver Dressed in Glass Shows Secrets of Television

Receiver Dressed in Glass Shows Secrets of Television Some of the secrets of television reception are disclosed to the public by a glass-encased receiver exhibited by RCA at the New York World’s Fair. Although it is not in operation, those who see the set gain an impression of the genius out of which grew such […]
Radio Living Room of Tomorrow

Radio Living Room of Tomorrow Simple in arrangement, and soft in color because of television, the suggested “radio living room of tomorrow” at the New York World’s Fair is open to visitors, who are permitted to inspect the various sight, sound and facsimile facilities while they are in operation.
Washer in a Kitchen Table Needs No Storage Space

Washer in a Kitchen Table Needs No Storage Space The problem of storing a full size electric washer in apartments is solved by combining it with a table that gives daily service in the kitchen. Occupying a space twenty-four by forty inches, the machine is complete with wringer and built-in rinse and wash tubs. It […]
Farmer's Car Pulls Plow over an Acre in Three Hours

Farmer’s Car Pulls Plow over an Acre in Three Hours Instead of hitching up a horse or tractor, one farmer harnesses his automobile to the plow. One man drives the sedan, keeping the car wheels on one side in the previous cut of the plow; his partner handles the plow. In that way they turn […]
IF YOU WANT THE LADIES TO LIKE YOU, Clip this Coupon

Television Picture Attachment Uses Any A.C. Set for Sound Utilizing the chassis and loud speaker of any a.c.-operated radio for accompanying sound, this table-model attachment reproduces television images for direct viewing. It plugs into your regular receiver in the same manner that you would connect a record player. The picture is 3-3/8 in. by 4-3/8 […]
The Scooter Goes To Town

Last year only 5,000 motor scooters were turned out by all the companies in the field. This year, one Chicago company expects to build 10,000 units. The motor scooter is a sturdy little workhorse, as well as a pleasure vehicle. Production of motorized scooters is an infant industry that is growing fast. Left, three-wheel car, one of the adaptations of the scooter.
The Trailer Grows Up

By Julian Leggett ROM the time, only ten years ago, when it was little more than a big wooden box perched precariously between two wheels, the trailer has come a long way. Just recently, an auto-and-trailer unit was traveling the desert road beside the Salton sea, with the speedometer needle hovering close to seventy. As the driver picked up the telephone to inform his family in the trailer that they were nearing their destination, there was a loud bang. The driver felt a quick tug at the steering wheel, a sudden drag on the car. But nothing else happened. There was no loss of control, no careening. Cautiously he set the brakes and brought the two vehicles to a stop. Investigation revealed that one of the trailer tires had blown outâ€”at seventy miles an hour-yet not even a dish was out of place in the trailer's cupboard.
There's No Place Like Home - for Accidents

By Roderick M. Grant MAKING gravy, you'd say, is a pretty safe occupation. One housewife will tell you it's mighty dangerous; she was painfully burned by a flour explosion over her skillet. Another woman was careless with bleaching powder and set the house afire. Still another learned disastrously that it's not safe to clean clothes with gasoline, even in open air. It all adds up to the fact that you're living in a very dangerous place. More people were killed in their homes last year than died on all the streets and highways. Four times as many were injured.
Blazing NEW TRAILS for Music

MUSIC is an art, the making of instruments a science. That may explain, in some measure, how Laurens Hammond has been able to invent the electric organ and the Novachord, even though he cannot play a piano. By inclination and training, the unmusical Mr. Hammond is an inventor. On his desk is a large binder full of patents that have been issued to him. The first one, dated 1912, is for a barometer he developed when he was but sixteen years old. His earlier efforts were in connection with Diesel engines, three dimensional pictures, and novel stage-lighting effects, but the turning point in his career was his synchronous motor. He used it as the heart of the first electric clocks he made in a small room over a store building in Evanston, Ill., and almost overnight there was a national clamor for them. The shop mushroomed into a large plant.
The Electric Home of the Future

By George H. Bucher President, Westinghouse Electric & Manufacturing Company SPARKS leap from your fingertips when you walk across a carpeted floor. Lightning strikes from the sky. Water changes to steam and giant turbines whirl magnets within magnets to light the world and drive its machines. Because man has tamed this invisible, omnipresent electric force and harnessed it to his tasks, today's civilization depends almost for its very existence upon its uninterrupted flow.
'Golf Tees' Support Roof of Windowless Office

Above you see no model of building of future, but the office of S. C. Johnson & Son, Racine, Wis. Two air intakes at top are called "nostrils" by architect, Frank Lloyd Wright. Skylights and unseen fixtures supply light in the windowless building. Above, the circular "bird-cage" elevator. Radiant floors heat the building, steam pipes being laid under the four-inch concrete slab. Without a conventional front door, entrance is through a roofed-over auto driveway. Near by is a "carport" for parking, and on its roof a theater and a squash court.
Camera Worn Like Wrist Watch Loads Thirty Six Pictures

Camera Worn Like Wrist Watch Loads Thirty Six Pictures Latest in the line of miniature cameras is a tiny affair worn like a wrist watch. Sighted easily by raising the wrist to eye level, it carries a load of thirty-six exposures despite its diminutive size. It has an f4.5 lens and a focusing scale graduating […]
Dogs Ride in "Normandie's" Dummy Funnel

Dogs Ride in “Normandie’s” Dummy Funnel That dummy funnel on the “Normandie,” which is probably a concession to the old popular fancy that the more funnels, the more power, is not entirely a dummy after all. Inside it are recreation rooms, a theater and kennels for the passengers’ pets. The dogs live comfortably aboard ship […]
What You would Find on Mars

By R.S. Richardson and Glenn C. Moore Staff Members, Mt. Wilson Observatory SEVERAL months ago thousands of people in the United States became panic stricken when they heard on the radio that men from Mars were invading the earth. At that time Mars was 223,100,000 miles away, almost the greatest distance possible. But since then the Red Planet has been drawing steadily nearer, until on July 27 it will be only 36,030,000 miles away, the closest approach for fifteen years past and for fifteen years to come. From a faint speck of light, Mars has grown until now it appears brighter than any star in the whole heavensâ€”a glowing ball of fire low in the southern sky. Gazing at our nearest neighbor in space" this summer, we cannot help wondering what kind of a world it is. What strange things would we find on it? How would we feel there?