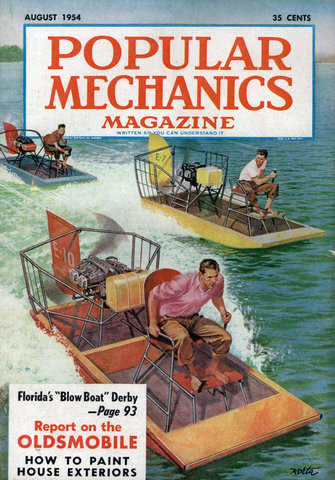 Buying stuff that’s made in a foreign country is somewhat less exciting and exotic nowadays… IMPORTS FROM FOREIGN LANDS FREE To New Members! Free to new members of the International Traders Guild-many unusual, useful products from France, Japan, Germany and other foreign lands, and trade bulletins listing hundreds of import bargains to sell at high […]
POWER that turns mountains into molehills

POWER that turns mountains into molehills … and miles into minutes! HERE’S power-riding at its thrilling best. From the moment you swing into the foam-rubber cushioned saddle . . . from the instant you twist the throttle of this breath-taking beauty, you’ll know why the Harley-Davidson 74 OHV is the one motorcycle every rider wants […]
There's Everything in This Car Even the Kitchen Sink

This car reminds me of the Oscar Mayer Wienermobile. There’s Everything in This Car Even the Kitchen Sink Everything is built into a car designed by a Swedish engineer everything including the kitchen sink! The car is equipped with two beds and a kitchen. With the beds folded out of the way, it will seat […]
Racing on the Bonneville Salt Flats

Writes Mal Hooper AS I HEADED for the starting line on the Salt Flats of Utah, I remembered two cars that had gone there earlier and how they had ended upâ€”smashed to bits on the smooth, hard salt. I remembered the judges in the timing stand and the spectators lining the course, tense as an oncoming streamliner began to fishtail. The car rolled over and flipped end for end, hammering itself into a mass of junk. It crashed on its back and slid past the last beam of the timing apparatus, automatically clocking its speed at more than 225 miles per hour. The car was completely ruined. Yet driver Sonny Rogers crawled out unhurt, his life saved by the roll bar and helmet. My second memory was of Fred Carrillo. He wasn't quite so lucky when his 1300-pound streamliner began to drift away from the black line at top speed. Carrillo corrected with his wheel and the car bounced and jumped across the salt for 2000 feet, scattering parts and pieces in all directions. It seemed impossible that Carrillo was still alive yet he emerged with no greater injury than a broken leg.
Full-Length Sleeping Cot Rests on Top of Automobile Seats

Full-Length Sleeping Cot Rests on Top of Automobile Seats Now the traveler can install a relief bunk in his car â€” an aluminum cot that extends above the seats from front to rear. While one person drives the other can sleep in full-length comfort. Made of lightweight tubing, the cot is supported by legs resting […]
On Trial . . . America's First Jetliner

By A. M. "Tex" Johnston Chief of Flight Test, Boeing as told to Thomas E. Stimson, Jr. CRASH BOATS are standing by off Mercer Island!" "All airports in vicinity of Seattle are closed to normal traffic!" "Rescue helicopter now on patrol off Seward Park!" "Fire fighters standing by!" "Your chase plane is airborne!" Reports like these were part of the pre-flight preparations in July when copilot "Dix" Loesch and I prepared to streak down the concrete runway at Renton Airport and lift the prototype of America's first jetliner into the air on its initial test flight. Boeing's 707 "Jet Stratotanker-Strato-liner" is considered the safest passenger transport ever built, yet Dix and I were happy about the elaborate precautions to rescue us if anything went wrong. All our recent preflight and ground tests had been perfect. We were expecting a normal routine ride on the first flight, but there's always a chance that the unexpected can happen.
What's New For Your Home

1. CONTOUR-BED MECHANISM is available in sizes to fit all standard beds. Two 1/4-horsepower motors raise or lower the head or foot to the desired position. Toggle switches within reach of a bedfast person operate the mechanism. Special mattresses, either foam rubber or innerspring, are available for the bed 2. WEATHER STRIPPING for casement windows is a metal strip that just slips into place over the frame of the window without screws or nails. One form of the stripping is applied to the head and lock side, another to the hinge side and sill. There's a packaged set for standard windows or you can buy any length 3. "SNOW-ICE" sealed inside a plastic bag is frozen in your refrigerator or home freezer, then used to keep perishables fresh and cold during picnics and other outings. The material can be refrozen as many times as desired. You also can use it to keep foods cold while defrosting a refrigerator or home freezer
Floating Automobile Trailer Cruises Lake Under Own Power

Am I the only one who thinks this looks like a floating bordello? Floating Automobile Trailer Cruises Lake Under Own Power When it’s not rolling down the highway, a trailer owned by a West Berlin woman is likely to be found cruising around a lake. A pontoon raft turns the amphibious trailer into a houseboat. […]
NYLON REACHES SWEET SIXTEEN

By Robert E. Paquin NYLON, A COMMONPLACE WORD today, is just 16 years old, yet to many it seems as if it has always been here. For only 14 years it has adorned feminine legs, but today this tough, durable chemical has invaded a variety of industries. Molded-nylon components now go into everything from egg beaters to motorcars. Nylon's amazing toughness and resistance to wear, even when lubrication is nonexistent, have made it a first-class engineering material. New uses for the versatile plastic are being found daily.
SKI-HI STILTS FOR KIDS OF ALL AGES

Make blog had a post with a pair of stilts that look exactly like these yesterday. They also have instructions on how to build them so you can save your self a quarter. SKI-HI STILTS FOR KIDS OF ALL AGES Two lengths of Reynolds Do-It-Yourself Aluminum tubing and one piece of bar stock are the […]
Garden-Hose Attachment Anchored in Turf Forms Portable Shower

Garden-Hose Attachment Anchored in Turf Forms Portable Shower Outdoor showers are provided by a device that can be quickly set up on any lawn. A metal pipe with a spray head at its curved end, it has a sharp point at the other end that can be pushed into the ground to hold the assembly […]