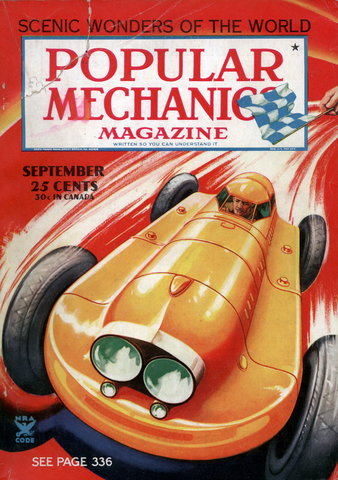 How would you like to make a motor trip across the continent and back in less than three days? Automotive engineers in Europe are toying with ideas no less fantastic since breakdown tests with a Hotchkiss motor have shown that this engine is capable of such a performance if the car can be built to go with it. This motor on the test block ran for fifty-two hours and forty-six minutes at 4,000 revolutions per minute, a speed which would have carried a car about 5,000 miles.
Trip to Europe Made by Air, Rail and Water

Trip to Europe Made by Air, Rail and Water Crossing the Atlantic ocean by air has been removed from the category of high adventure to a regular form of transpor- tation running on schedule. For the traveler who is in a hurry, one steamship line has established, as a part of its regular service, a […]
Conditioned Air Supplied to Canopy on Bed

Conditioned Air Supplied to Canopy on Bed Refreshing sleep on hot nights is made possible by an air-conditioning machine equipped with a canopy which fits over the bed. Fresh air, constantly changing, is supplied to the sleeping compartment by the machine, which cools the air and removes excess moisture. The refrigerating unit and the small […]
Is there a Sea Serpent?

RECENT startling events have revived the ocean's greatest unsolved mysteryâ€”Is there a sea serpent? Startling apparitions have evoked an amazed reply of "Yes!", which downright fakes have turned to a wisecracking "No!" But best scientific opinion refuses to deny flatly, that somewhere, in the deepest depths of the ocean, there may be such a thing, a species unknown to modern science. This possibility appears amazingly real in the light of the sensational tales of the last nine months that have made the sea serpent come alive again, after years of quiescence. For almost all these tales are told not by one person, but by hundreds. All vow they have seen marine monsters like nothing known, and in several different places. Nearly two hundred canny Scots have seen something that undoubtedly inhabits Loch Ness, inland lake in northern Scotland. In the Pacific ocean, near Vancouver, three score testify to having seen a sea monster. High officers of the liner, "Mauretania," wrote in the log book recently that they saw one in the Atlantic.
Oil Well Fire Staged as Latest Crowd Thriller

This would be a pretty amazing show. Though with today’s gas prices, it would be a very expensive one. Oil Well Fire Staged as Latest Crowd Thriller Setting an “oil well” on fire and then extinguishing the flames is the latest crowd thriller. An underground pipe line carrying twenty-five million feet of gas per hour […]
The Secrets of Making Marionettes Part II

By RUFUS ROSE ARTISTS' oil paints, obtainable in tubes, offer the best medium for painting marionettes. Flat white paint is used as a ground color to cover all exposed parts. When dry, white enamel is used to get a gloss on the teeth and eyeballs, using a small camel's-hair brush as in Fig. 30. To get flesh color, mix burnt sienna with flat white paint, sometimes adding small quantities of red, yellow or blue to bring out various skin shades. Apply a spot of vermilion in the center of each cheek and blend it into the flesh color of the face. The lips are painted with a suitable mixture of vermilion and burnt sienna. Shades of blue or brown, or a mixture of both, are used to make eye shadows and lines to imitate wrinkles in the face and hands.
ACTORS' BREATH MADE VISIBLE FOR WINTER FILM SCENES

ACTORS’ BREATH MADE VISIBLE FOR WINTER FILM SCENES Motion pictures of winter scenes may be made realistic by a device that makes the actors’ breath visible, just as it would be at low temperatures. The device resembles false teeth. It enables the actors to keep Dry Ice in their mouths without harmful results. The warm […]
The Scenic WONDERS of the WORLD

THE nine most interesting places in the world? I should not dare to try to name them. But I can give you a list of those which to me have seemed to offer more of interest than any other nine that I have known. Firstâ€”The Grand Canyon of Arizona. Why? Because I love beauty and it is the biggest beautiful thing in the world. It is unique because the earth can show nothing to equal it in beauty, gorgeous-ness of color, grandeur, impressive weirdness and immensity.
LOUDSPEAKERS IN METAL "MAN" MAKE ROBOT MUSICAL

LOUDSPEAKERS IN METAL “MAN” MAKE ROBOT MUSICAL By connecting loudspeakers in a sheet-metal “man” to a radio receiver, a musical robot has been produced as an advertising stunt for a New York store. The metal figure, made of stovepipes, galvanized-iron cans and funnels, is installed on the roof. Wires from the loudspeakers located in the […]
LOSE A MINUTE OR LOSE A FINGER

LOSE A MINUTE OR LOSE A FINGER Let a cut go and you invite infection, amputation or even death! Apply anti-septic, cover with Drybak Band-Aid, and you are safe! Drybak Band-Aid is a ready-to-use strip of waterproof adhesive with a borated gauze pad attached. Sun tan color to be less conspicuous. Individually wrapped for your […]
Speedboat Balloon Spearing Is the Latest Water Sport

Speedboat Balloon Spearing Is the Latest Water Sport Spearing rubber balloons from a racing speedboat is a new water sport which has proved as popular with spectators as with the participants. Two-men racing runabouts compete in this sport, going five times around a one-mile course. Across the starting line a wire is stretched and to […]