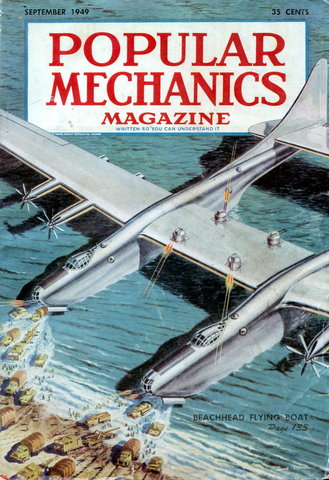 IS RADIANT HEATING MODERN? Radiant heatingâ€”modern by American standards â€” has been warming Korean homes for more than 2000 years, according to L. G. Nonini, of Wallace, Idaho, who worked in Korea for some time. The home builder first digs ditches along the site of his new home. Over the ditches he lays thin slabs […]
Computer Cuts Farm Figuring

It’s funny to look back at how bulky computers used to be. I mean, there is no way this thing would fit in a manila envelope. Computer Cuts Farm Figuring Farmers who dislike paper work now can solve many types of mathematical farm problems with a computer that shows the desired information at a glance. […]
Desk-Pad Intercom

Desk-Pad Intercom “Talking through your desk pad” is possible with an office intercommunication unit that is housed in a pad only 3/4 inch thick. Up to five unitsâ€”each a master stationâ€”can be quickly attached by plugging in an extension cable. Each unit can be used to receive or send messages. The conversation is private because […]
Aircraft Turntable Checks Compasses

Aircraft Turntable Checks Compasses Aircraft compasses can be quickly checked for accuracy and any errors corrected with a compensator that is embedded in concrete at the airfield. The old method of compensating a compass was to maneuver the plane to definite headings on the ground which were determined by reference lines from a compass rose […]
Gas Under Pressure Operates Lighter

That looks just like a modern butane lighter, but with a MUCH bigger fuel tank. Gas Under Pressure Operates Lighter Butane gas under pressure is the fuel used in a new cigarette lighter that yields more than 3000 lights before the tank is empty. A small knob is pushed with the thumb to release the […]
Egg-Shaped Wheels Pull Through Mud Without Chains

Wheels with "corners" on them may seem useless, but a New York inventor believes such "flat" wheels may replace the track-type drive on military vehicles and tractors. Each driving unit is actually a pair of oval wheels synchronized with their long axles at right angles to each other. This means that the point of one wheel and the flat part of the other are in contact with the ground at the same time.
Hot Rods and Electrons

That looks kind of scary. I wonder how many “friends, relatives and acquaintances” got pressured into buying one of these masks. Extra Money – Loads of Fun! MAKING TRUE-TO-LIFE MASKS As a hobby or business you’ll enjoy this fascinating art Friendsâ€”relativesâ€”acqaintancesâ€”they’re all potential customers Inexpensive to make, no special skill required Cash in now in […]
Dual Controls On Motorcycle

Dual Controls On Motorcycle Dual controls on a new motorcycle permit either rider to drive the machine. When used as a trainer the motorcycle permits a novice to learn to drive in 30 minutes, according to the manufacturer. The motorcycle has a second seat over the rear wheel with a complete set of controls for […]
Working Record Recorder for Kids

A â€” Twelve-pound self-powered tape recorder swings over the shoulder like a camera case. It is used by newsmen to cover news for the "Mutual Newsreel" programs; the small microphone may be held in the hand, or strapped on wrist B â€” All-channel television and FM indoor antenna of unusual design employs parabolic-dipole arrangement on telescoping rods. Swivel joints make numerous adjustments possible
Panorama an a Giant Screen

SIGHTSEEING "trips" to America's beauty spots have been conducted right on the Chicago Railroad Fairground with a projection system that makes color pictures of Niagara Falls seem so real that you wonder why you can't feel the mist on your face. Kodachrome transparencies are projected on the screen five at a time and, so perfectly aligned are the individual pictures, that the effect is of a giant, natural panorama.
High-Voltage Magic

By Eugene M. Hanson WHEN THE mad scientist in the movies pulls the switch and his fantastic machinery begins to hum and glow, causing flashes of man-made lightning to leap and crackle around the room, you can be fairly certain that Kenneth Strickfaden is somewhere in the picture. Ever since he created the electrical effects for "Frankenstein," Strickfaden's genius has been in great demand among motion-picture producers when spectacular laboratory trickery can be made to fit into the plot. Strickfaden not only created the effects for "Frankenstein," but also doubled for Boris Karloff in sequences which called for million-volt sparks playing over his body. Since then, he has added his wizardry to "Son of Frankenstein," "Bride of Frankenstein," and the other sequels; the "Buck Rogers," "Flash Gordon," "Sherlock Holmes," "Chandu," and "Fu Manchu" featuresâ€”altogether more than 50 movies in the last 15 years.