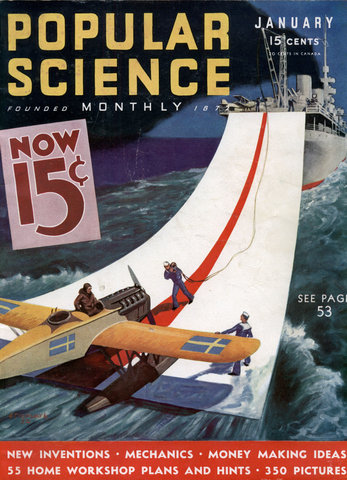 Santa Claus... down a chimney? No, she's found out there's no such man. Not a jolly white-bearded old fellow who gives things to you, but a lean old man — "Hard Times"—who steals everything away. Show her—show her it's a lie! The Welfare and Relief Mobilization for 1932 is a cooperative national program to reenforce local fund-raising for human welfare and relief needs. No national fund is being raised; each community is making provision for its own people; each community will have full control of the money it obtains.
Traffic Lights on Auto Signal Right or Left Turning

Will miniature traffic lights for each car banish hand signals, and make driving safer in crowded city streets? Police officials of Oxford, England, recently saw such a system demonstrated by Sir William Morris, motor car maker. Installed in pairs one on each side of a car, and operated from a dashboard switch, the new lights use stop and go signals familiar to every motorist to warn of turns and other maneuvers.
New Electric Ears

Buttonhole Microphone Catches Speaker's Words as He Moves About Platform — Gigantic Reflector Type Clearly Report Crowd Noises WHEN football crowds roar, radio listeners now hear them in their loudspeakers, not as a muffled, distant murmur but as clearly and faithfully as though sitting in the grandstand. When a broadcast is made of a political meeting or any other public assemblage, every speaker on the floor of the hall is heard by the radio public as distinctly as are the platform orators. No need for long-winded announcers to cut in; the man sitting at home beside his radio set often can hear more than the occupants of the expensive ringside seats.
Growing Grass Turns Roof Into a Lawn

Growing Grass Turns Roof Into a Lawn Covering a roof with growing grass might seem fantastic to most persons, but Louis Koefoed, an architect of East Rockaway, N.Y., has found it practical as well as decorative. Since he applied a roofing of sod over tar paper to his dwelling last fall he has experienced a […]
New Conveniences for the Home

ELECTRIC MIXER AND CAN OPENER. Driven by a small motor, this new kitchen utensil, which is said to cause no radio interference, combines a meat chopper, can opener, and also a knife sharpener LOOSENS ICE TRAY. Tipped with rubber, this tool is specially designed for use in prying out ice trays. Handle shoved forward against shank jars the tray loose BUTTON ON SALT SHAKER, Salt flows from this shaker when a white button is pressed and pepper comes at pressure on a black button. Movable cork breaks up salt lumps so they will flow easily
Chesterfield Ad: I really don't know if I should smoke...

This is an example of the cigarette industry brilliantly portraying their own propaganda as conventional wisdom. In the 1920’s it was considered inappropriate for women to smoke. Realizing that they could double their market the American Tobacco company hired a man named Edward Bernays to change that perception. Bernays, who is considered the father of […]
MATCH CAN BE LIGHTED 100 TIMES

Does anyone know how this works or what the match was made of? Update: A reader sent in this possibility: an “Ignitable Stick” from the Google patent database. Thanks! MATCH CAN BE LIGHTED 100 TIMES If you borrow a match from the gentleman pictured at the right, he is likely to want it back! He […]
Auto Lights Save Planes Lost in Fog

Auto Lights Save Planes Lost in Fog Summoned by radio, 2,500 motorists lined an unused California field the other day to rescue two jog-bound Navy planes. While the cars’ headlights formed an improvised beacon, as shown above, a big transport craft found the flyers and led them to a safe landing. They had gasoline left […]
Plane Refuels from Speeding Auto / Big Clock

Transferring gasoline from an automobile to a speeding airplane was a feat accomplished at Muroc Dry Lake, Calif., the other day, demonstrating a new way of refueling on the fly. Hitherto an airplane making an endurance flight has been able to take on fuel only from another plane. For the unusual stunt, a small sedan was fitted with a special superstructure to handle the hose, and contact was successfully made between plane and car after a few minutes' maneuvering. When the fuel tanks had been replenished a supply of oil was pumped to the plane. The success of the stunt depended on keeping the machine at the same speed.
SUIT GUARDS BOMB OPENER

SUIT GUARDS BOMB OPENER Dressed in his official costume, the German police officer charged with the responsibility of opening bombs found in the mail looks like an ancient warrior clad in armor. The mask and padding are designed to protect him if an explosion should occur, despite his delicate handling of an infernal machine. In […]
ENGLISH CAR HAS DOOR IN ITS TOP

ENGLISH CAR HAS DOOR IN ITS TOP Doors in roof and side admit a motorist to a new low-slung English car, recently exhibited in London. As the side door opens, a section of the top above the door automatically tilts upward, making entrance or exit easier. When the odd machine was placed on exhibition at […]
TRICK CHRISTMAS CANDLES SHOOT UP WHEN LIT

TRICK CHRISTMAS CANDLES SHOOT UP WHEN LIT Red Christmas candles that will-amaze and mystify the children can be prepared in such a way that when the wicks are lighted the outside, which is merely a shell, will shoot into the air and reveal a stick of candy. This is much more surprising and novel than […]
WEAPON FOR MOTORISTS BRANDS THUG WITH DYE

WEAPON FOR MOTORISTS BRANDS THUG WITH DYE A new weapon for the protection of motorists and shopkeepers not only subdues the most vicious thug, but also brands him for identification in case he should escape. When he is struck with the club-shaped weapon, an airtight membrane breaks, releasing a chemical similar to tear gas and […]
How Modern Surgeons Conquer Fatal Germs

By Frederic Damrau, M.D. A SMALL item recently appeared in the newspapers. It reported a new ruling of the American College of Surgeons. In the future, all surgical thread must be tested thirteen days instead of six to insure its freedom from germs. That tiny item was buried in the back pages of the papers. Few people read it. Yet, behind it lies one of the most thrilling chapters in the whole dramatic story of death-fighting by surgery. Less than seventy years ago, such a simple operation as the amputation of a finger was a life and death matter. In one famous European hospital, eleven out of seventeen amputations resulted in death from blood poison. Germs of infection were unsuspected. Sterilization, as we know it today, was unknown. Antiseptics were undreamed of. Doctors knew little about infection and were helpless before it. It was not until after the Civil War, that antiseptics first appeared and revolutionized the science of surgery.
Homemade Tractor Has One Wheel

WITH a power plant that is suspended securely inside of a big ring-shaped wheel, a garden tractor has been built largely from odds and ends by R. D. Read of Akron, Ohio. It operates like the unicycle automobile developed in England. (P.S.M. May, '32, p. 63.) A single-cylinder motorcycle engine was used without modification except for the installation of an additional gear for cranking, and a planetary type clutch operated from the plow handle.
Auto Stealing Now $50,000,000-a-Year RACKET

By Edwin Teale A BLUE roadster, traveling at high speed, rounded a curve outside a New Jersey town and apparently vanished into thin air. Five minutes later, two motorcycle cops, flattened against whizzing machines, raced around the corner, flashed past a lumbering furniture van and headed after the stolen car. Without knowing it, they had already passed it. Snugly housed within the big van, the roadster was already the center of attention of a corps of experts. License plates were being shifted; wire wheels were being substituted for wooden ones; gray, quick-drying paint was being applied to hood and body. A hundred miles away, across the state line, the van stopped, A light steel runway slid to the ground from the rear of the truck and a gray roadster, with wire wheels and Pennsylvania license plates, rolled to the pavement ready for sale to an unsuspecting buyer. The latest trick of a motor-stealing mob had worked and the police were baffld.