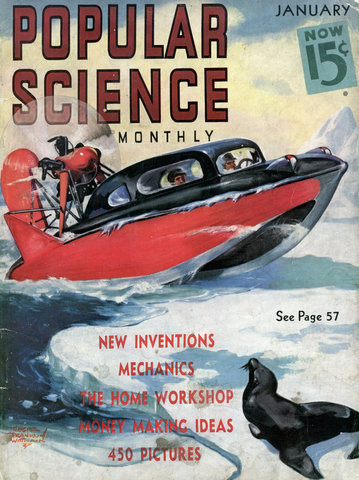 By KENNETH MURRAY HOME decoration isn't a subject to make light of, but here's a way to do it nevertheless. These comical lamps are formed from 7-1/2- and 10-watt bulbs of the round, outside-colored variety, usually sold for 10 cents. More powerful lamps would be unsatisfactory because the novelties are not for general illuminationâ€”merely to add a spot of live color here and there.
Farmer Grows Pumpkins with Human Faces

I’m not sure what’s scarier. The pumpkin head or that woman’s eyebrows. Farmer Grows Pumpkins with Human Faces Pumpkins with human faces have been produced by John M. Czeski, Ohio farmer, after four years of experimenting. To grow the novel fruit, Czeski fashions an aluminum mold of the head he wants to reproduce, and places […]
Trailer School TEACHES DRIVING and HOUSEKEEPING

OFFERING a comprehensive two-weeks course, what is believed to be the world's first school for trailer owners has just been established on the outskirts of New York City. Staffed by a faculty of experts, the unique school provides instruction in all phases of trailer operation, construction, and maintenance. The course begins in an indoor classroom where present and prospective trailer owners hear lectures, watch demonstrations, and receive their first lessons in driving with model automobiles and trailers that are maneuvered by hand on a table-top driving area. The curriculum progresses to the study of trailer chassis, lighting systems, brakes, springs, hitches, and other construction details.
Green Replaces Red in Make-up for Television

Green Replaces Red in Make-up for Television Green lipstick and rouge replace the customary red in make-up designed for actresses appearing in television broadcasts. The television camera, it is explained, does not record the red coloring in the human complexion, leaving the transmitted image flat and unnatural. When green is substituted, however, the lips and […]
Handy Aids for the Household

HANDY BASKET FOR LAUNDRY A new canvas bag hangs on the washer to catch the clothes, and can be carried easily or hung on the line EGG OPENER Squeezed together and pressed down over the top of a soft-boiled egg, the blades of the odd accessory at left shear off the upper shell ROLLER STRAINER In the strainer shown below, an egg-shaped roller presses the food against the mesh, and a rotating scraper prevents clogging
Doctors Listen to Noises in Patient's Head

Doctors Listen to Noises in Patient’s Head With his head “wired for sound,” George Yocum, Pennsylvania miner, faced a group of doctors and medical students at Temple University recently as amplifiers reproduced the roaring and whistling sounds that have bothered him since he suffered a skull fracture two years ago. A microphone placed against his […]
Thrilling Stunts with a Glass-Eating Chemical

Etching your laboratory glassware is only one of the many possibilities offered by compounds of the active element fluorine By RAYMOND B. WAILES NOT long ago, a noted chemist told of a solvent powerful enough to dissolve nearly every known material. If the water on the earth were replaced with a liquid called selenium oxychloride, he said, we should have to carry umbrellas made of glass, platinum, or tungsten whenever it rained, for those are about the only substances that the fluid does not attack. There is a more familiar chemical, however, so corrosive that it could even eat its way through a glass umbrella. Its name is hydrofluoric acid, and it is one of the interesting compounds of the highly active element fluorine with which you will enjoy experimenting in your home laboratory.
Cream Replaces Silk Stockings

Cream Replaces Silk Stockings Liquid cream that dries to resemble silk stockings is a new cosmetic said to be a boon to the outdoor girl. When applied to the legs, as shown below, the inventors claim that it is practically impossible to distinguish it from real silk hose.
Your Child's Portrait in a Doll

PORTRAIT DOLLS, modeled after children or adults by Dewees Cochran, New York painter and sculptress, reproduce all the details of features, hair, and complexion found in the original. Supplementing conventional sculptor's tools with dental instruments for fine work, Miss Cochran models the amazingly lifelike figures from real life, or from written descriptions and photographs, one full face and one profile. The doll head is first shaped in a claylike material. From this a plaster mold is made in which the head is cast in a virtually unbreakable substance that simulates actual skin texture.
Original Vanity License Plates

Words, Not Numbers,Grace New License Plates Names, abbreviations, and short words, real or made up, replace numerals on a new form of license plate proposed by Walter W. Hinton, of New York City. By using actual words on car plates, the inventor believes, they will be easier to read, and will make a distinct impression […]
HOW GOOD ARE THE NEW WAR MACHINES?

By ARTHUR GRAHAME SINCE shortly after the World War ended, we have read and heard much about marvelous new weapons that were going to win "the next war" between major powers. We have been told that swarms of airplanes would bomb the world's greatest cities into piles of smoking ruinsâ€”or at least win the war before a soldier could march across a frontier, by pulverizing transportation arteries and destroying concentrations of troops and war materials. Monstrous land battleships would crush resistance beneath their ponderous tracks, while deadly little tanks would spin across-country so fast that there could be no effective defense against them. Gases would suffocate and poison soldiers and noncombatants alike. Germs, death rays, and new explosives of terrific power would reduce the infantryman, who for centuries has ruled the battlefields of the world with his rifle and his bayonet, to the ignoble role of a mere mopper-up after the devastating new machines of Mars.
Germans Try Out Mystery Gun

Judging by the man in the picture, I would look for these “secret tests” somewhere really close to a tennis court. Germans Try Out Mystery Gun The novel one-man antiaircraft gun seen in the photograph below is now being tested secretly by German army experts. The gunner, seated behind the barrel, controls the gun accurately […]
The Making of Snow White and the Seven Dwarfs

A Famous Fairy Tale Is Brought to the Screen as the Pioneer Feature-Length Cartoon in Color By ANDREW R. BOONE BEHIND the black walls of an air-conditioned Hollywood studio laboratory, the shutter on a strange eight-deck camera flicked open and shut the other day, exposing the last of 362,919 frames of color film. At that instant was completed the first feature-length motion-picture cartoon ever created, one requiring more than 1,500,000 individual pen-and-ink drawings and water-color paintings. Also, at that moment, depth, a sense of perspective and distance hitherto seen only in "live action" pictures, sprang into being for cartoons. Both the giant camera and the picture had their beginnings in a decision made four years ago by Walt Disney, famed creator of Mickey Mouse and Donald Duck, to produce a feature based on a well-known folk tale. "Snow White and the Seven Dwarfs," a movie version of Grimm's famous fairy tale filmed by the multiplane camera, is the result.
Odd Bicycle Made from Bed

That’s actually a pretty cool looking bike. Odd Bicycle Made from Bed An English comedian recently entertained crowds at a cycling meet by riding the odd bicycle shown above. The frame of the curious wheel was made from the head of an old iron bed, to which old bicycle parts were added.
World's Largest Gorilla Preserved by New Art of Sculpturdermy

In the Remarkable Series of Pictures Reproduced on these Pages, You See How Sculpture and Taxidermy Were Combined To Re-Create a Rare Animal Specimen AMAZINGLY lifelike, the mounted body of the world's largest gorilla, a 500-pound giant, is being put on exhibition at the Academy of Natural Sciences, in Philadelphia, Pa. The enormous brute, together with its mate and baby, were bagged by a recent West African expedition led by George Vanderbilt, New York sportsman and explorer. The delicate work of mounting the gorillas was accomplished at the Jonas Brothers Studios, in Mt. Vernon, N. Y. On these four pages, you find pictured the successive steps, combining sculpture and taxidermy, which "brought to life" the jungle family. As an initial step, the experts assembled the bones of the skeleton by means of wires and steel rods.
Cigarette Holder for Nudists

This was a total revolution. You really don’t want to know where they held their cigarettes before this was invented. Cigarette Holder for Nudists Faced with the problem of carrying cigarettes when no pockets were available, a delegate to a recent nudist convention devised the holder shown at right. The leather case is strapped to […]