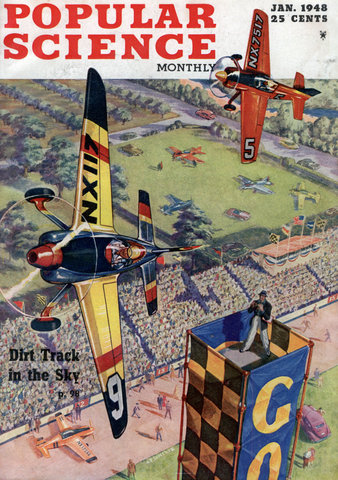 Color Simplifies Chart If you think the colorful maze of wavy lines on this seven-element oscillogram is complex, just try to unscramble the same lines on the one without color (inset). Westinghouse oscillographers, having the same trouble, collaborated with Ansco film experts on a method of photographing the wavy-line readings in color. By placing a […]
Static from the Stars

Because a radio ham heard strange sky noises, we may get better FM and television—and learn more about our universe. By Herbert Yahraes Drawings by Ray Pioch WHEN young Grote Reber was a high school sophomore, he operated 9GFZ in Wheaton, Ill., and tacked so many recognition—QSL—cards to his bedroom walls that the plaster cracked and his parents cracked down. When not communicating with El Paso, Arequipa, Capetown, Prague, and other points, he designed equipment to communicate with them even better. Nobody who knew him then will be surprised to learn that he is still in radio—listening not to the chatter of hams, but to mysterious and bothersome radio waves that come from the heart of the Milky Way.
A Five-Story Tin Can

A Five-Story Tin Can Phantom view above shows how five different vegetables share the new Layer Pak tin can put out by the Larsen Co., of Green Bay, Wis. The various layers of vegetables are separated by parchment-paper walls.
60 Television Tubes an Hour

They're being made faster and cheaper now. TELEVISION for everybody comes a step closer with the development of mass-produced picture tubes, the heartâ€”and one of the most expensive componentsâ€”of video receivers. RCA's new plant in Lancaster, Pa., is already set up to turn out one of the big cathode-ray tubes every minute, and at a price that may reduce the cost of small television sets. These tubes are lineal descendants of the ordinary neon sign, or gas-discharge tube. About 80 years ago the British physicist Crookes pumped all the gas out of a discharge tube and found that the light inside the tube disappeared, but the end of the tube itself began to glow! His interest aroused by this effect, Crookes proved that it was caused by a stream of extremely small charged particles coming from the negative electrode in the tube.
Hairline Air Line

Hairline Air Line This Paris, France, youngster pilots a realistic model airplane through the perils of his first haircut. Less air-minded small fry can he snipped while riding a merry-go-round or mounting a roarless lion.
RCA Ad: Freedom to LISTEN - Freedom to LOOK

As the world grows smaller, the question of international communications and world understanding grows larger. The most important phase of this problem is Freedom to Listen and Freedom to Lookâ€”for all peoples of the world. Radio, by its very nature, is a medium of mass communication; it is a carrier of intelligence. It delivers ideas with an impact that is powerful ... Its essence is freedom â€”liberty of thought and of speech.
Mother Could Fix This Radio

PSM photos by Robert F. Smith YOU don't need to know a coil from a condenser to fix this radio. Throw-away units, as easy to change as radio tubes, contain practically everything that might go wrong in the set. Six "canned" circuits with pronged bases, designed to retail in department stores at $1.85 apiece, replace the maze of wiring located in back of the dial of a conventional radio.
Rocket's Flight Kept In Sight

Gun-mounted camera eye keeps movie record of V-2 missile as it speeds into space at 3,500 miles an hour. By Martin Mann POPEYE is a seeing machine. Popeye can see things yon can't see. His big glass eye can follow a V-2 zooming 3,500 m.p.h, and tell you just what it does at the 100-mile peak of its flight. But even Popeye is no match for enemy guided missilesâ€”he could not spot an attacking rocket soon enough to sound the alarm.
Can Huge New Atom Guns Shoot Out Biggest Secrets?

Gigantic ring-shaped machines, with 10-billion-electron-volt wallop, may transform energy into matter. By Alden P. Armagnac Drawings by Ray Pioch SUPPOSE that a bullet could be fired 150,-000 miles, six times the distance around the world. Suppose that it could be given a shove to speed it up every 150 yards. Suppose, too, that it could be so aimed and guided throughout this long, fast flight that it would hit a target no bigger than a mans hat. Now suppose, furthermore, that this bullet were something that no one had ever seen or ever could see. The experimental physicists have quit supposing such things can be done. They know they can perform the very feat that you have just been asked to imagine. They are as sure of it as you are that two and two make four. They have the blueprints for guns that will impart such tremendous energy to such particlesâ€”and they expect to have at least one of the mammoth machines operating in about three years.
Motorcycle Cops Show How to Ride 'Em

By Tom Cameron IF YOU'RE learning to ride a motorcycle, the policemen who patrol your streets and highways could give you some valuable pointers. Chances are these men are just about the best rider? in the community. Because of the nature of their work they have to be. And it's likely this ability was not won through trial and error, for many police departments give their men a course in riding before sending them out. One that has won acclaim for the thoroughness and success of its motorcycle training program is the Los Angeles Police Department. Out of many years of experience, embracing use of machines from the old one-lungers to the four-cylinder speedsters of today, the instructors there have evolved detailed "do" and "don't" procedures. The "don'ts" come first:
DIY Scooters

Scooter Has Three Speeds. Before becoming a cadet-midshipman at the US Merchant Marine Academy, William R. Kern welded some 3/4" pipe, added a few gears, chains, and a 1/2-hp. motor, and came up with the two wheeler shown above. It carries him 80 miles on a gallon of gas at an average speed of 30 m.p.h. A V-belt, the tension of which may be varied by an idler pulley acts as a clutch to engage the three-speed transmission. The latter transmits power to the rear wheel through a chain. Gears were cut on a milling machine and hardened.
Motor Unit Runs Bike or Mower

Powered by a 1-1/2-hp. engine, a two-wheeled unit designed and built by William Lusk of Cicero, Ill., can be readily attached to a bicycle, lawn mower, or scooter. Small pneumatic wheels carry its 200-lb. weight without marking soft turf and give ample traction for cutting heavy grass. Used on the highway as a scooter or bike motor, the unit delivers better than 25 m.p.h. Lusk used a 1/8" steel plate as a combined platform and chassis. The axle is a 5/8" steel shaft running in ball bearings, with a small over-riding clutch at each wheel to give differential action. Power is transmitted by a pair of V-belts from the engine to a 7-to-l gearbox taken from a washing machine. A movable idler acts as the main clutch. By using V-belt pulleys of different diameters, Lusk changes the effective gear ratio to suit the job the unit is doing.
Junior at the Wheel

Junior at the Wheel Many a parent has wished for something to keep Junior occupied during long drives. With this toy steering wheel, daddy can concentrate on the road ahead while young “hopeful makes believe he too is driving. Made of hard rubber, the mock wheel is attached to the dashboard by a suction cup. […]
Luxury for Sale: Price, Only $19,200

This looks like the Victorian Clampetts. This original Model E was photographed during a 1905 Florida racing carnival. It was built by the White Sewing Machine Co.
Phone Aids Free Hands

The busy executive can now carry on conversations over the telephone without even lifting a finger to hold it. With the Jordaphone (PSM, Oct. '45, p. 96), a wartime development of the Jordanoff Corp., he need only transfer the phone from its regular cradle to the special one in the top of the instrument. Here the incoming voice is picked up directly from the phone's earpiece and amplified through a loudspeaker, eliminating actual wire connections. An ordinary microphone, placed anywhere in the room, transmits the outgoing voice to the mouthpiece.
Corridor Traffic Light

If the instruments are so delicate, why doesn’t she use a cart instead of carrying them all piled up like that. Plus the traffic light doesn’t do you a whole lot of good if you can’t see it because, uh, you’re carrrying a pile of delicate instruments. Corridor Traffic Light Wartime’s proximity fuse is regulating […]
Photographic Data Storage For Computers

This is a pretty crazy way to store data. Camera Snaps Answers To speed recording answers in computing machines, Kodak has made a new camera that snaps 1,000 12-digit numbers a second. The numbers are photographed from a cathode-ray tube as spots; retranslated into electrical impulses by photoelectric tubes as desired for feeding back into […]
Twenty Walls for Better Lights...

Twenty Walls for Better Lights… This shell is half of an icosahedronâ€”a fancy word for a 20-sided roomâ€”used by Westinghouse engineers to test new street-lighting fixtures. When the technician above has adjusted the globe enclosing a bulb, the other half of the odd-shaped room is attached, and multiple walls give an even distribution of light. […]
Tomorrow's Store Today

Tomorrow’s Store Today Foley’s is designed to channel the flow of incoming stock and outgoing customers and purchases with maximum efficiency. DOWN in Houston, Texas, is what is said to be the most modern department store in the world. Foley’s is carefully planned to speed the flow of customers and merchandise. Shoppers park their cars […]
Jap Cars Shown (Very Early Toyotas)

Wow, this is just the beginning of Toyota’s reemergence after WWII. According to the blurb they only made about 2700 cars a year. Currently they are the second largest car company in the world and produce close to ten million cars a year. That car is actually kinda snazzy, it reminds me of a mashup […]
Junior at the Wheel

Junior at the Wheel Many a parent has wished for something to keep Junior occupied during long drives. With this toy steering wheel, daddy can concentrate on the road ahead while young “hopeful makes believe he too is driving. Made of hard rubber, the mock wheel is attached to the dashboard by a suction cup. […]