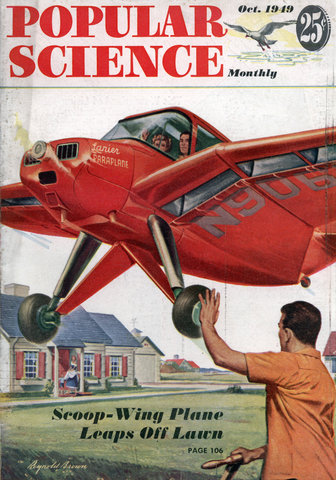 Britain jumped the global gun in the race for commercial air supremacy with a recent announcement that its giant de Haviland Comet, first all-jet air liner, had made successful flights. After nearly three years under construction in secrecy, the sleek, sweptback-wing craft has been unveiled.
THE AMAZING NEW Man-From-Mars RADIO HAT

COMPLETE 2-TUBE RADIO BUILT INTO A HAT Here's the famous two-tube topper you've read about in LIFE. TIME, POPULAR SCIENCE, BUSINESS WEEK, and many other magazines and newspapers, coast-to-coast. Now, you too can own this wonderful "dream-come-true" radio hat. A perfect gift idea! Study these amazing features....
Lenses Promise No-Hands Phone

BEING a good engineer, Dr. Winston E. Kock is a lazy man. He thinks it's too much trouble to lift up a handset every time you want to talk over the telephone. His idea of a telephone is a little black box you never touchâ€”just talk and listen to. Since Dr. Kock is a physicist-engineer for Bell Telephone Laboratories, he did something about his idea. He developed lenses that focus sound, a necessary preliminary to the lazy-man's telephone. The telephone itself is still only an idea, but the lenses have been made and should have many uses. You can understand why lenses are necessary if you've ever held an old-fashioned telephone receiver near the transmitter. The transmitter picks up the receiver's sound, which keeps going around the circuit until it is a howl. A lens would direct the receiver's sound at the user and keep it away from the transmitter. ("Intercom" systems do have combination receiver-transmitters, but you must press a switch to talkâ€”more work than holding a handset.
Planes "Type" Messages in Sky

Radio taps the keys as seven-ship flying typewriter prints 15-mile-long placards at 10,000 feet. By Herbert Johansen WRITERS in the sky have abandoned old-fashioned, one-plane "penmanship." Now they're "typing" out their aerial messages in neat block letters. The "keys" of Skytyping are seven planes that fly a straight, parallel course across the sky. Electronic controls puff smoke at preselected intervals to form celestial letters as in the word "T E S T," shown in the photo at the top of this page. A "mother" plane, flying in the center of the formation, automatically controls the entire operation. It transmits a constant stream of radio tone signals at one-second intervals. As receiving sets in each of the seven planes, including the mother plane, pick up the signals, switches are thrown in a control board that has 200 plug-in sockets. The board in each plane has been preset according to a message pattern.
"Carfeteria" Serves Motorists at Wheel

Boy, with a snazzy name like Carfeteria I can’t understand why these never took off. “Carfeteria” Serves Motorists at Wheel Eating is made easv for motorists who patronize the wheellike Los Angeles Motor-mat shown above. Spokes of the wheel are tracks along which run small carriages. You drive into one of the 20 stalls, where […]