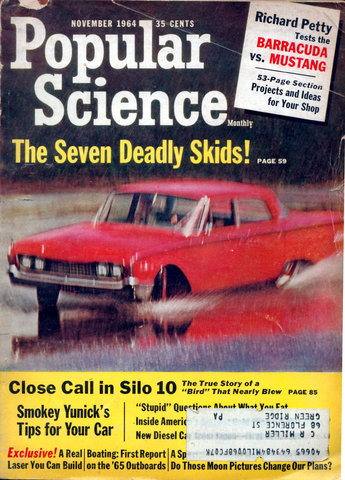 The incredible ruby ray is the hottest scientific discovery of the decade, but practical uses are still scarce. Here's your chance to join the search -June, 1960: Dr. T.H. Maiman, of the Hughes Aircraft Co., reports the development of the first successful ruby laser. â€”November, 1964: Popular Science publishes plans for the first do-it-yourself ruby laser. By Ronald M. Benrey IT MAY sound like science fictionâ€” but it's really science fact: You can build a working ruby laser. It could be the most challengingâ€”and rewardingâ€” home-workshop project that you have ever tackled. A ruby laser is a source of coherent light. All of the light waves in the pencil-thin, bright-red ruby laser beam are in phaseâ€”or in stepâ€”with each other. This extraordinary property of the laser beamâ€”shared by no other light sourceâ€”has spurred a world-wide search for practical uses. Ordinary light sourcesâ€”a light bulb, for exampleâ€”generate incoherent light; the light waves are out of phase with each other. Drop a pebble into a still pond, and the waves ripple out smoothly in all directions. This represents a single light wave from a light source. All light sources produce more than a single wave, however. They act as if you dropped a handful of pebbles at once: You get a jumbled clutter of waves one on top of another. This clutter of waves is analogous to incoherent light. Suppose, though, you dropped your handful of pebbles one pebble at a time, each in exactly the same spot in the pond. The waves would continuously radiate from that point. All of the wave crests would be in phase. This is coherent radiation. A ruby laser generates a coherent light beam by a similar process. Laser is an acronym for Light Amplification by Stimulated Emission of Radiation. Inside the ruby laser rodâ€”heart of the ruby laserâ€”excited atoms are stimulated to emit light waves in phase with each other.
15 Lane Drive-in Bank

This is just about the most American thing I’ve ever seen: Big drive-in bank can serve 15 customers at a time The entire street-level floor of the new Denver U.S. National Bank is devoted to customers who do their bankning without having to get out of their cars. It has 15 drive-in teller booths equipped […]