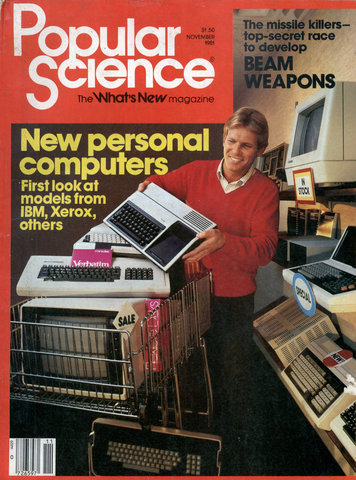 Next Issue:
This is the latest issue we have of this publication.
Versatile vehicle

I believe that is a prototype Humvee. According to the Wikipedia page, one of the competing vehicles was designed by Lamborghini(video). Versatile vehicle High ground clearance mates with a low silhouette in AM General’s new cross-country vehicle. Designed for a U.S. Army competition, the 1-1/4-ton prototype could serve as an anti-tank missile carrier, a fire-control […]
Now a word from the world's first talking watch!

World's First! You heard it first folks, right from the watch's mouth! A watch that really "tells" you the time to the exact minute — in A.M. or P.M. This new dimension in "telling" time is totally electronic and solid state with no moving parts. The Voice-Master is not a tape player. A human voice is "simulated" using a new technology called "voice synthesis." Three integrated circuits store the voice wavelength code and release it through the mini-speaker whenever the Voice-Master "talks."
Now, more channels, plummeting prices for new backyard satellite-TV antennas

Better quality, easier-to-use features, and affordable do-it-yourself kits make home Earth stations practical By SUSAN RENNER-SMITH The view from my hotel room was so incongruous that I burst out laughing. A score of gleaming dish antennas squatted in the parking lot below me, facing the southern sky. It looked as if a giant mushroom crop had sprouted in the starlight. Then I saw the glowing TV set near one dish. People crouched around it watching, I knew, a program broadcast by some far-off satellite.
For the '80's: a decade of wonders in home electronics

IBM heads the list of new small-computer makersâ€” and that means big changes to come By WILLIAM J. HAWKINS The room was jammed. I was lucky to be up front; before me sat the demonstrator. His hands stretched across the keyboard as characters streamed onto the CRT display. It was a computer, a personal model for use in home or office. But it wasn't just any new small computerâ€”this was an IBM.
First Commercial Airbag

A combination of air bag and seat belt protects the driver who opts for Mercedes' new safety package. The air bag is the only one offered as a production option by any auto maker. In an impact of over nine mph, a pendulum sensor on the drive-shaft tunnel detects deceleration. A tiny pellet of solid rocket fuel then detonates; as it burns, it produces nitrogen gas that balloons a neoprene bag from the steering wheel. When the driver hits the bag, it deflates slowly. The driver is also restrained by his seat belt.
The coming record revolution: digital discs

A laser "reads" the compact, no-wear disc to deliver superior hi-fi By LEONARD FELDMAN Tokyo, Japan A Sony technician slipped a small disc into the slot of a player no larger than a portable cassette machine. I noticed the record's shiny surface broke light into rainbow colors. Seconds later I was bathed in rich, wide-ranging stereo music that sounded better than anything I'd ever heard from discs or tapes. Sony Corporation's Dr. Toshi Doi, a leading digital-systems designer, explained that this was a true digital record: Information stored as number codes on its surface was being converted into music. Instead of grooves, this disc had an optical track "read" by a laser beam. I heard absolutely no surface noise or distortion and no pitch fluctuations from the spinning disc. Dynamic range, or the difference between the loudest and softest musical sounds, was awesome.
Early Laser Pointer

- here come wide-screen crystal-clear pictures New video components speed TV systems that match 35-mm-film fidelity By JOHN FREE Washington, D.C. For several days, groups of government officials, politicians, and journalists crowded into a darkened room at CBS's offices here. We'd come to view a rare, one-time collection of video gear. "What we are going to show you," CBS's Joseph Flaherty, vice-president of engineering development, told my group, "is a combination of high-resolution TV, stereo sound, wide-screen TV, and enhanced-color TV." During the next hour I watched a variety of amazing TV images that had extraordinary clarityâ€”more than five times the detail of television pictures you see on conventional home receivers. The high-resolution pictures, a dazzling match for sharp-focus 35-mm slides, were shown on special "Cinerama-type" direct-view sets and a large-screen projection TV. Other equipment used by CBS, such as microelectronic encoding circuits and a Sony-built digital video recorder, may have a key roleâ€”in improved formsâ€”in delivering this new type of TV to you during the 1980's.