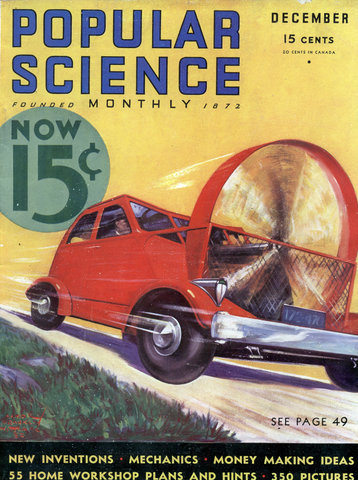 Bullet bouncers are now in use on cars of the San Francisco, Calif., police department to protect members of radio patrol crews from the gunfire of thugs. The contrivances are sheets of quarter-inch-thick steel plate, equipped with shuttered windows and hinged to the top of the windshield frame.
BOAT RUNS ON ROLLING DRUMS

A boat that runs along the surface of the water on drums was given a trial recently on the Hackensack River, near Newark, N. J. Five specially-designed white steel drums, having indentations like the treads on tires to increase their grip upon the water, support the craft.
Amazing Facts about Today's Triumphs of Surgery

The first of a series of Articles describing the wonders worked in modern hospitals By Frederic Damrau, M.D. ONE of the most dramatic stories of the Twentieth Century remains virtually untold. This is the story of modern surgery. Tradition and ethics of the medical profession prevent the surgeon from reporting to the press his own accomplishments. A wall of silence surrounds his work. Even well-informed persons know little of the miracles of life-saving which these white-robed figures perform behind the closed doors of the operating room.
MIRROR PART OF COMB

MIRROR PART OF COMB A pocket comb that carries a mirror at one end is the handy toilet accessory produced by a Portland, Ore., inventor. The round glass is permanently set in the hard rubber of the comb. The “two-in-one” comb is five and a half inches long, slipping easily into pocket or handbag.
SIXTY-FOOT BUS TO CARRY VISITORS AT WORLD'S FAIR

SIXTY-FOOT BUS TO CARRY VISITORS AT WORLD’S FAIR Sixty feet long, but able to turn in its own length, is a bus designed to carry visitors about the grounds at the Chicago World’s Fair, next year. Of a semi-trailer type, it will accommodate fifty seated passengers and forty-five standing. A fleet of sixty of the […]
UNCLE SAM GETS GIGANTIC CAMERA

Big enough for an eight-year-old child to walk through, a camera that can use any plate from four by five inches to four by four feet, has been designed for the U. S. Geological Survey. It is suspended from an overhead track twenty-five feet long and four feet wide. This suspension prevents vibrations from the ground or building interfering with the apparatus.
Pontoon Boat Aims at 150-Mile Speed

Strange Craft Has Tractor Propeller Under Its Cockpit and Draws Inch of Water SAFE water travel, at speeds that only the most daring race pilots now attempt, is brought within reach of everyone by a radically new type of water craft. When suitable motors are installed, the inventor expects it to shatter all records and attain 150 miles an hour. Despite its swiftness, the airplane-shaped boat demonstrated extraordinary stability in its first trials on Long Island Sound, N. Y., the other day. It amazed marine experts among the spectators by turning around in its own length, at high speed, without upsetting.
Microphones Run This Office

HOTEL’S TANK CARRIES SIGHTSEERS UP MOUNTAIN Riding up the side of a mountain in a tank is a new experience afforded tourists visiting at Oberach, Bavaria. One of the progressive hotels there has installed a thirty-four horsepower tractor tread tank for the use of its guests. In it they are taken to the top of […]
World's Longest Water Tunnel

World’s Longest Water Tunnel FAR beneath the feet of tramping millions, the longest tunnel of its kind in the world is nearing completion in New York City. Twenty miles in length, it will help distribute a billion gallons of water a day to New York homes and factories. Officially, the shaft will be known as […]
Tear Gas Gun on Wrist Is Fired by Finger Ring Trigger

Tear Gas Gun on Wrist Is Fired by Finger Ring Trigger Shot by a trigger worn as a finger ring, a wrist gun that belches out clouds of tear gas has been designed for the protection of clerks, cash-iers and payroll messengers. The little gun, with its muzzle pointing forward, is strapped to the wrist […]
TAIL LIGHT SHINES ACROSS CAR

These have finally become popular now, but they use LED’s instead. TAIL LIGHT SHINES ACROSS CAR An automobile tail light, resembling a neon tube, has been developed by an Indianapolis, Ind., inventor. The streak of red light, running across the car is easily seen from any position in the rear and it also outlines the […]
Helpful New Tools for the Household

KEEPS EGGS FRESH. This circular container is for eggs or fruit kept in the refrigerator. Its flat sides will not break the skins or crack the shells. Open spaces afford free ventilation that tends to prevent spoiling of contents FLOUR SIFTER. With the double action flour sifter, cut out view of which is given at left, flour can be sifted as frequently as desired without removing it from sifter. The sieve is in the middle and there is a lid on each end CONTROLS THE HEAT. The valve shown above can be fitted to any steam radiator and when the dial is set, the desired temperature is automatically maintained. The new valve is installed by simply removing the old one, screwing the new one in place, and adjusting heat control dial
Amphibian Bicycle Can Travel on Land or Water

Amphibian Bicycle Can Travel on Land or Water A hybrid among vehicles, an amphibian bicycle that can travel on land or water, was demonstrated by its French inventor at a recent Paris exposition. Its wheels are hollow, bulbous floats that, with the aid of four smaller globes on outriggers, sustain it in the water. All […]
Air Driven Auto Goes Eighty Miles an Hour

Climbing steep hills covered with slippery ice is only one of the feats claimed possible for a curious air-driven automobile recently tested at Detroit, Mich. A four-bladed propeller, driven by a 100-horsepower engine, pulls it along like a tractor airplane. With a wheelbase of 132 inches and a weight of approximately 1,500 pounds, the strange machine is said to reach eighty miles an hour and cover thirty miles on a gallon of fuel. Because the wheels roll free and do not drive the car, it is not necessary for them to grip the ground as on a conventional machine.
PILOTS FACE EACH OTHER IN STRATOSPHERE PLANE

What the inside of a stratosphere plane looks like is shown in the picture at the right. It is the first view to reach this country showing the interior of a Farman plane recently tested near Paris, designed to fly at high speed through the rarefied atmosphere nine miles above the earth (P.S.M., Oct., '32, p. 13). Two pilots sit facing each other in the barrel-shaped cabin, which is sealed airtight to protect them from the physiological effects of reduced air pressure at great heights. They will fly the machine blind, depending upon instruments alone to guide them except in taking off and landing.
ESCALATOR IN GARAGE SPEEDS CAR SERVICE

This looks really fun, but I think you might have a tough time getting insurance after the first few workers get crushed. ESCALATOR IN GARAGE SPEEDS CAR SERVICE Workers in a San Francisco, Calif., garage, with a 1,000-car capacity, can deliver a customer’s automobile from the eighth floor to the sidewalk in forty seconds. This […]
PHONOGRAPH AND LOUDSPEAKER REPLACE ARMY'S BAND

PHONOGRAPH AND LOUDSPEAKER REPLACE ARMY’S BAND Will canned music inspire future warriors? Veteran army bandmasters in Denmark were taken aback when a lumbering sound truck recently took the place of a regular band and led a detachment of Danish soldiers on a cross-country march. Martial airs played upon a phonograph were amplified and projected to […]
USE COFFEE AS FUEL IN BRAZIL LOCOMOTIVES

USE COFFEE AS FUEL IN BRAZIL LOCOMOTIVES Coffee beans are now being pressed into compact briquettes and used for fuel in locomotives and factories in Brazil. Due to conditions in Brazil, which produces most of the world’s coffee, there has been an enormous oversupply of the beans this year. Hundreds of thousands of sacks were […]
Blast of Giant Atom Created Our Universe

By Donald H. Menzel Harvard Observatory OUT of a single, bursting atom came all the suns and planets of our universe! That is the sensational theory advanced by the famous Abbe G. Lemaitre, Belgian mathematician. It has aroused the interest of astronomers throughout the world because, startling as the hypothesis is, it explains many observed and puzzling facts. According to Lemaitre's theory, all the matter in the universe was once packed within a single, gigantic atom, which, until ten thousand millions years ago, lay dormant. Then, like a sky-rocket touched off on the Fourth of July after having remained quietly for months on a store shelf, the atom burst, its far-flung fragments forming the stars of which our universe is built.
TAIL LIGHT ON THE HEEL

TAIL LIGHT ON THE HEEL Pedestrians may walk in safety along an unlit road at night, with a new tail light strapped to one heel. Under the rays of an automobile headlight, its reflector flashes a warning red signal to the driver.
Dead Horse "Lives" in Marvel of Taxidermy

Great Australian Racer, Exhibited in Rare Mounting, Looks Ready for One More Contest CROWDS packing the grandstands at Belmont Park, famous Long Island racetrack, received their biggest thrill recently from a horse not entered in the racesâ€”a horse that had died six months before! Phar Lap, legendary wonder horse of Australia, rode by on a motor truck, neck arched, alert ears slanted forward, chestnut coat a silken sheen. Every muscle, every vein, every ripple of the skin was there. The magnificent animal had been "brought to life" by one of the most amazing pieces of scientific taxidermy on record. After appearing at American tracks, where he had been expected to run this year, Phar Lap is going home. In Australia, the famous horse will be placed on permanent exhibition.