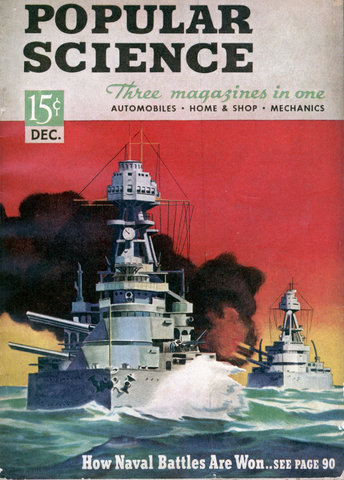 Jan, 1941
Two-Way Firemen's Radio Is Carried on the Back

AS A result of months of research work by two New York firemen, Samuel Harmatuk and Arthur Meyerson, smoke eaters in America's largest city soon will be directed in fire fighting and life saving by means of lightweight, back-pack radios. Weighing only fifteen pounds, the two-way units can be slipped on over heavy fire-fighting clothing, leaving the hands free for climbing. A flexible cable controls the switch which shifts the set from transmitting to receiving and back again.
Do You Get Traffic Jitters?

IMAGINE that you are driving your car at a good clip down a boulevard running through the residential section of a city. The road is wide and uncluttered by traffic. Your car purrs along smoothly. Suddenly, with no warning whatever, a woman darts out from the sidewalk and throws herself directly into your path. What will your reactions be? What will be the effect on your nerves? How will the shock of the experience affect your subsequent driving?
Tiny Grand Piano Can Be Played with a Toothpick

Tiny Grand Piano Can Be Played with a Toothpick FOUR craftsmen took six months to build a two-inch-square working model of a Steinway grand piano, illustrated at right. Played with a toothpick, it has thirty-six ivory keys and is strung like a full-size instrument. With other objects in the photo â€”miniature enamel furniture, and a […]
I'll help you get a Daisy for Christmas - Red Ryder

This is a great ad. Kids who really want a BB gun for christmas write in and Red Ryder will send them little “this is what you should get me for christmas” reminder cards. Then they just hide them all over the house where their parents are sure to find them. I also really like […]
Bulletproof Body Turns Any Auto into an Armored Car

Bulletproof Body Turns Any Auto into an Armored Car Every automobile in the United States is potentially an armored car, under a plan recently proposed to aid the national defense program. The scheme would provide tanklike bodies of half-inch steel which could be speedily mounted on the chassis of standard cars. Swarms of these “minute […]
MOBILIZING MATERIALS

By ARTHUR GRAHAME A TELEPHONE bell rang in the office of Edward R. Stettinius Jr., chief of the National Defense Advisory Commission's materials division. It was the Chinese Embassy calling. A sizable quantity of tungsten had just become available in Indo-China. Would the "United States be interested? It most certainly would. Three calls by Stettinius brought quick results. The Reconstruction Finance Corporation would supply funds for the purchase. The Procurement Division of the Treasury would instruct one of its agents to do the buying. The Maritime Commission would arrange shipment. Next day, the tungsten was aboard an American ship, on its way to the U. S. A.
HOW SCIENCE SPEEDS THE COUNTING OF 40,000,000 VOTES

Willkie or Roosevelt? HOW SCIENCE SPEEDS THE COUNTING OF 40,000,000 VOTES HUMMING over wires from every corner of the nation, election returns in a few days will bring the answer to the question of America’s 40,000,000 voters: Who’s elected ? Years ago, many days would pass before positive results of a Presidential election were known. […]
Action Titles Pep Up Your Movies

By JOHN H. WOOD TITLES containing or implying action do much to improve home movies, and making them can be just as much fun as shooting regular scenes. You can easily devise many ingenious titles your audience will be certain to appreciate. Taking a picture of a title upside down, then turning the piece of film around and splicing it so the action is reversed is an old trick, but one for which new variations are constantly being contrived by 16-mm. movie makers. Charles H. Taylor, of Chicago, suggests two such variations.
Eavesdropping Mike Listens In on Umpire's Scraps at Ball Park

Eavesdropping Mike Listens In on Umpire’s Scraps at Ball Park So THAT baseball fans may eavesdrop on arguments between the umpire and players next spring, a “disappearing microphone” has been included in a new public-address system at a Wichita, Kans., stadium. Pressing a foot lever allows the microphone to pop from its underground box near […]
New Cartoon Camera Combines Drawings And Photographs

A REAL car with a flesh-and-blood driver rolls sedately along a busy city street. Careening behind it, a caricature of an Indian in a speeding jallopy performs antics that would whiten the hair of a traffic cop. Trick photography produces animated movie cartoons of this novel sort, combining hand-drawn characters with natural backgrounds, in the studio of Paul Terry at New Rochelle, N. Y. In making the 6,000 separate cartoons that go into a typical 500-foot animated film, the artist uses a special procedure. Each figure or object is drawn on top of an opaque silhouette, of black or white pigment, applied to a transparent sheet of celluloid. Hold it up against the, light, and you will see only the black outline of a figure; by reflected light, its details appear. So each cartoon receives the illumination of a pair of spotlights, from above, while a stop-motion camera photographs it. Meanwhile the opaque cartoon effectively blocks out the unwanted part of a real movie scene, which is projected from below through the transparent part of the celluloid. The rest of the background automatically is photographed with the cartoon, giving a composite picture. For each succeeding frame, the same procedure is used, after cartoons and background scenes have been shifted.
Give Cigarettes as a Christmas Present

Apparently twenty years after this article, it was alright for women to smoke. for Christmas … give the cigarette that satisfies A carton of Chesterfields with their MILDER BETTER TASTE will give your friends more pleasure than anything else you can buy for the money. The attractive Gift Carton that says Merry Christmas
Vest-Pocket Respirator Guards Workers' Lungs

Vest-Pocket Respirator Guards Workers’ Lungs Small enough to be carried in a vest pocket, a one-ounce respirator protects industrial workers against dust with new convenience. The unbreakable, soft rubber device covers the nose alone, so that a wearer can talk, eat, smoke, and don glasses or goggles. While the user breathes naturally through his nose, […]
"Night Glasses" Train Soldiers To Fight in the Dark

Learn how to shoot while wearing a welding mask! “Night Glasses” Train Soldiers To Fight in the Dark For practice in fighting in the dark, cadets in a British officers’ training unit wear special “night glasses” during daytime maneuvers. Fitted with dark lenses, the glasses reproduce the visibility conditions that would be encountered at night. […]
"Home, James" by Tandem Bike

“Home, James” by Tandem Bike With gasoline impossible to obtain for use in private automobiles in Denmark, wealthy Danes hire chauffeurs to take them to and from work on tandem bicycles. Sue h cycle-chauffeurs do the steering and most of the pedaling. Since July, the number of bicycles in Copenhagen has jumped from 1,750,000 to […]
Balloon Ends Discomfort in High-Altitude Flying

Do you think you could get one of these past security now? I mean a balloon with a a nozzle could make a handy flame thrower. Balloon Ends Discomfort in High-Altitude Flying To make things more comfortable for passengers and pilots flying at high altitudes, Dr. Ralph Greene, Miami, Fla., physician and medical consultant to […]