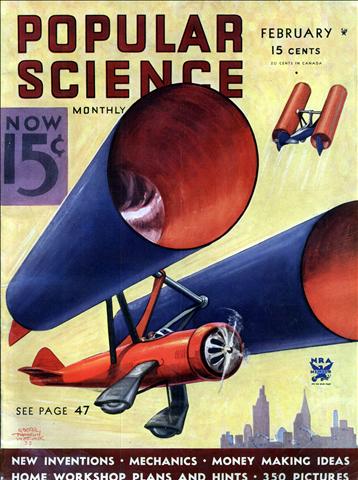 Jets of air, sucked in at the front and expelled at the rear of huge tubes, are the unconventional means advanced by a Glen-dale, Calif., inventor for lifting and propelling an airplane. He has designed and patented a wingless craft, employing this principle, which he maintains will be able to rise and descend vertically and to hover motionless aloft.
Latest Conveniences for the Household

STARTS FURNACE FIRE. This portable gas torch expedites the chore of starting a fire in the furnace. Lighted with a match and thrust beneath the grate, it fires the coal. MAGNET IN CAN OPENER. The arrowpoints to a steel magnet set in this can opener to attract small metal bits that otherwise might fall into the can.
5 amazing RCA TUBE IMPROVEMENTS that put new life in your Radio

"BULLEEVE ME!" New tubes do make a difference when you listen to Fanny Brice. Don't buy any tubes today without knowing that you are getting these 5 remarkable improvements that will really put new life in your set! These great advances have come out of the RCA Radiotron Company's laboratories, developed by world-famous engineers for you.
COMPRESSED AIR DRIVES LOCOMOTIVE 125 MILES AN HOUR

Will steam power give way to compressed air for driving locomotives and hauling fast passenger trains? That is the vision of William E. Boyette, of Atlanta, Ga., whose amazing challenge to the iron horse—a monster truck-shaped locomotive propelled by compressed air—was about to undergo a trial run between Atlanta and Jacksonville, Fla., at this writing.
ELECTROCUTED SQUIRREL SHORT-CIRCUITS PLANT

It’s a good thing this guy didn’t get fried in an early computer or I’d have to spend half my day desquirreling my code. ELECTROCUTED SQUIRREL SHORT-CIRCUITS PLANT When a squirrel tried to jump across a gap between two 11,000-volt transformers at Fond Du Lac, Wise, recently, it caused damage which required three weeks for […]
DESIGNS BARREL SHIP FOR USE AT SEA

DESIGNS BARREL SHIP FOR USE AT SEA To demonstrate the feasibility of his design for a high-speed ship that rolls over the water like a barrel, a marine engineer of Port Blakely, Wash., has constructed an electric-powered model that is reported to perform all the maneuvers of a conventional vessel. He proposes building full sized […]
Automobile Traditions Challenged by First Streamlined Stock Cars

Startling Changes in Body Design Are Expected to Boost Road Speed and Cut the Cost of Operation by Robert E. Martin AS THIS issue of Popular Science Monthly is published, in automobile shows and dealers' showrooms all over the country are being exhibited the world's first scientificially streamlined stock cars. Introduced by leading American manufacturers, they mark a new stride toward a goal to which automotive engineers have been working for years—the development of a car in which fuel economy, riding comfort, and speed are brought about by reducing to a minimum the losing battle with air resistance that has been waged by every automobile that ever was placed on the roads.
England Now Has Gasoline Made from Coal

British motorists may now enjoy the novelty of buying gasoline made from coal, which has just been placed on public sale. The event marks the beginning of a great chemical industry by which England hopes to put 65,000 men to work and to end her dependence upon imported petroleum. A monster plant now rising at Billingham-on-Tees will transform 1,000 tons of coal daily into the synthetic fuel, using a process already in successful operation in a smaller experimental plant at the same site.
UNCLE SAM ASKED TO BUILD Floating Ocean Airports

REDESIGNED and improved since its earlier forms were described in this magazine, a new type of "seadrome" or floating airport, is proposed by its inventor, Edward R. Armstrong, as the basis of a modernized plan to bridge the Atlantic with a string of artificial islands. His project, which has attracted the interest of U. S. Government officials, is intended to provide twenty-hour airplane service between America and Europe. It calls for the anchoring of five of the seadromes between America and Spain, at about the latitude of Washington, D. C, to serve as refueling stations about three hours' flight apart. Planes using these islands in stepping-stone fashion could transport heavy pay loads at high speed, since their loads of gasoline would be light.
ELECTRIC EYE REVEALS AD IN MIRROR

ELECTRIC EYE REVEALS AD IN MIRROR Designed to be installed in the lobbies of hotels and public buildings, a new advertising device offers a passer-by a chance to inspect his appearance in a mirror, and invites him to take a folder from a pile on a shelf. When he reaches for a folder, he unwittingly […]
New Discoveries Show Electricity Governs Our Lives

By Edwin Teale EXPLORERS, working in one of the strangest realms of science, are unearthing curious, dramatic facts. The way autos run, the way seeds sprout, the way eggs hatch, the way radios function, and even the way we feel when we get up in the morning, the latest tests have shown, are affected by flowing, invisible charges of electric power. Recently, experiments in the laboratories of many lands have added to our knowledge of the magical work of electricity in the air.
EXCITING WIND-TUNNEL GAME TEACHES PLAYERS TO FLY

Entertainment and instruction are combined in an exciting aviation game devised by Assen Jordanoff, veteran pilot, whose articles on flying have appeared from time to time in this magazine. Each of the contestants sits before a miniature wind tunnel, as shown above, and attempts to keep a model plane on an even keel in the breeze by manipulating standard aircraft controls.
New Russian Monorail RUNS IN TROUGH ON BIG SPHERES

FRAGMENTARY and conflicting reports from Russia of a revolutionary new type of railway under secret test there, which aroused the curiosity and interest of the American engineering world, have just been followed by the first complete details of the new system, and actual photographs of a working model in operation. Fully as remarkable as advance reports, the system proposed by M. I. Yarmanchuk, its inventor, calls for streamlined trains running at 125 miles an hour on giant, flattened spheres, twelve feet in diameter, instead of wheels. Each car is supported by two of these spheres, one at each end, and they are whirled by electric motors contained within their shells and mounted on the rigid axles.
AUTO WHEEL LAUNCHES GLIDER

AUTO WHEEL LAUNCHES GLIDER Using the rear wheel of an automobile to launch a motorless plane is a stunt successfully developed by members of a Newark, N. J., glider club. One end of a 2,000-foot manila rope is attached to the glider and the other to the drum on the car’s wheel, which is jacked […]
SINGER CAN HEAR VOICE AS AUDIENCE HEARS IT

SINGER CAN HEAR VOICE AS AUDIENCE HEARS IT So that would-be singers may hear themselves as others hear them, a Los Angeles, Calif., voice teacher and former grand opera singer has invented and patented a voice reflector. Fitted around the pupil’s neck like a collar, as shown above, its convolutions carry a part of the […]
Chimneys Blow Smoke Rings

Chimneys Blow Smoke Rings To add an unusual touch to these Orvieto, Italy, chimneys, they were constructed on spiral lines so that the smoke comes out of them in graceful curves and rings.