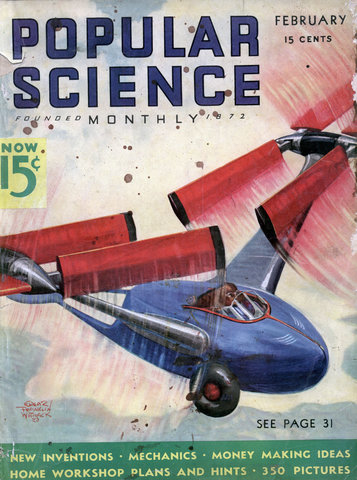 May, 1936
MOTOR CYCLE HAS JACKKNIFE CHASSIS

MOTOR CYCLE HAS JACKKNIFE CHASSIS To allow easy access to its motor, the body of a motor cycle recently constructed by a French inventor unfolds like a jackknife. A metal frame, which supports the driver’s seat and covers the motor, is attached to the chassis so that it may be tilted straight up in the […]
THREE-WHEEL "BIKE" DRIVES LIKE AN AUTO

THREE-WHEEL “BIKE” DRIVES LIKE AN AUTO Automobile, tricycle, and bicycle features are combined in an odd vehicle recently introduced. The “driver” sits in a comfortable chair seat and propels the car by a bicycle-type sprocket gear connected with the two front wheels. The machine is steered by the single rear wheel, turned by means of […]
Living Rat Traps RAISED ON NOVEL FARMS

In This Article, the Author Takes You for a Visit To a Strange "Ranch" Where Ferrets Are Bred by Thousands To Aid Man in His War Against Rodents By Walter E. Burton IF A MAN. . . make a belter mouse-trap than his neighbor," someone said, "though he build his home in the woods, the world will make a beaten path to his door." The truth of this statement is being realized with profit by a number of "farmers" in the vicinity of New London, Ohio; only the traps are raised and not built, and they work equally well with rats, prairie dogs, and squirrels. New London is known as the ferret center of the world, because more of those animals are raised there than in any other place, some 25,000 a year being a conservative present-time estimate.
How Dangerous Is Your Job?

By JESSE F. GELDERS HOW dangerous is your job? What are your chances of being killed, or temporarily or permanently disabled? More than they would be at other workâ€”or less? Those are broad questions, but I found an accident-insurance company ready to give amazingly definite answers. And the answers were full of surprises. A prison warden faces less danger than a diamond cutter, I learned. An ambulance driver's job is as safe as a garage mechanic's. Driving a heavy truck is riskier than either; it's as dangerous as moving buildings!
MEXICO BUILDS HER OWN "STATUE OF LIBERTY"

MEXICO BUILDS HER OWN “STATUE OF LIBERTY” Larger than the Statue of Liberty in New York Harbor is a massive monument recently erected on an island in Lake Patzcuaro, State of Michoacan, Mexico. The upheld right arm is reminiscent of the American Goddess of Liberty, but the striking, angular lines of the Mexican statue are […]
New Appliances for the Home

SHAVING STAND. Mounted on a heavy base, this metal stand holds everything needed in shaving. A built-in light below the mirror receives power througn an extension cord running from the base. There is a brush holder with cup, and a tray for razor and soap. The height is adjustable An exact "jiggerful" of liquor is drawn from a bottle when the rubber bulb on this new highball-mixing aid is pressed as illustrated above
The Art of Making Lifelike Marionette Bodies

Materials and tools . . . Various types of joints . . . Costuming . . . How to string puppets . . . Hints on their manipulation By Florence Fetherston Drake Lifelike MARIONETTE bodies may be made in several ways for use with heads of the type described last month (P. S. M., Jan. '36, p. 57): 1. Sewed and stuffed with kapok or cotton, and weighted. 2. Papier-mache shell bodies, filled and weighted. 3. Of wood (scrap pieces and dowel sticks) whittled to shape. 4. Best of all, carved from softwood, but this takes more knowledge and artistry than the others and therefore should follow experiments with one of the simpler methods.
TINY GLASSES SHIELD EYES FROM GLARE

I don’t really see how these do anything other than make you look like a cool character from a Terry Gilliam film. TINY GLASSES SHIELD EYES FROM GLARE To reduce the blinding glare of approaching automobile headlights, a novel eye shield has recently been introduced. Strapped to a band worn about the head, a metal […]
ROCKING BED EASES HEART STRAIN

But is it worth it if you also get seasick? ROCKING BED EASES HEART STRAIN Sufferers from heart ailments are said to be aided by a new rocking bed. Operated by an electric motor, the bed alternately raises the head and feet of the patient, helping the blood circulate to all parts of the body, […]
PADDLE-WHEEL PROPELLERS LIFT AND DRIVE NOVEL PLANE

METAL SPHERE IS ROLLING GYMNASIUM Fun and exercise are provided by a metal sphere devised by two French inventors. By using hand and foot grips within the ball, and shifting his weight in acrobatic maneuvers, an athlete can propel himself about, as shown in the accompanying photograph. Made of a latticework of metal strips, the […]
FIFTY YEARS OF Aluminum

The Strange Story OF THE Magic Metal By Edwin Teale JUST half a century ago, the commonest metal in the earth's crust was as scarce as silver. Prof. Frank F. Jewett, of Oberlin College, Oberlin, Ohio, was pointing out this curious paradox to his chemistry class in the spring of 1883. "If any of you can extract aluminum in commercial quantities," he concluded with a smile, "you are sure of a fortune." A slender student in one of the front rows nudged his neighbor. "I'm going after that metal!" he whispered. That was the beginning of one of the most dramatic achievements in chemical research. The student was Charles Martin Hall. Hardly three years later, in a wood-shed workshop, using makeshift apparatus and homemade batteries, he achieved the goal which the greatest scientists in the world had failed to attain. On February 23, 1886, Hall rushed into Jewett's laboratory with a few small buttons of silvery metal in his hand.