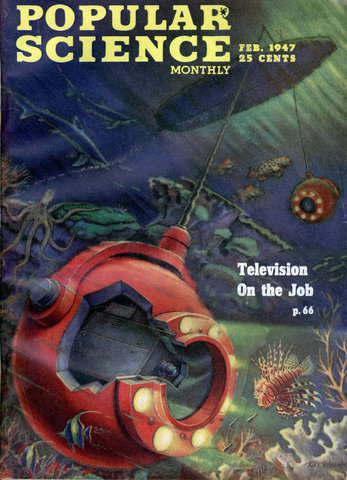 Cartoons by SYD LAND Catsup Tamer. Not too much, not too little, with this catsup regulator, says Bill Hopewell, of Cincinnati. Back-seat Ejector. The automotive device above is the interesting brain child of David E. Mann, Jr., of Needham, Mass.
What's New in AVIATION

P-51 GETS A BOOST. When the Army recently experimented on a Mustang fighter (above), it installed two ram-let engines on its wing tips. The jets don't start working until the P-51 hits 350 m.p.h.
PLYWOOD CAMERA Does Photo Copying

By Walter E. Burton ALMOST unlimited are the uses to which this photographic copying outfit can be put. In the office, shop, and home, it can make exact, low-cost reproductions of important documents, letters, checks, data sheets, drawings, instruction sheets, recipes, blank forms, and similar "flat work" and it can be employed for photographing small objects. The work can be done directly on paper or on film. Any of several sensitized materials can be used. Process film, commercial photographic recording paper, contrasty glossy enlarging paper, and other papers work successfully.
Three Routes to SUPERSONIC FLIGHT

ENGINEERS, striving to build a flying machine that will carry human beings faster than the speed of sound, have only three modes of flight with which to do it. These illustrations, used by Douglas engineers to explain the basic theories of flight, portray the principles upon which supersonic aviation must depend—until science thinks up something new.
Electric Bell Provides Steady Alarm to Rouse Sound Sleepers

If your wind-up alarm clock runs through its short tinkle without disturbing your slumber, try using this electric bell that will keep on ringing until you disconnect it. It employs a doorbell transformer and bell, housed in any decorative box that blends with the bedroom furniture.
Rockets Soup Up British Bike

Repeating Flash Systems Time-savers for photographers are the two lamps above, in which manually operated cranks replace spent bulbs with new ones, moving the reflectors out of the way as they do so. Once the fresh bulbs are in place, the reflectors return to position. The top lamp was invented by E. B. Nobel and […]
Two-Minute Car Washer

Two-Minute Car Washer When a car emerges, shiny and clean, from this tunnel of tubes, it has spent no more time in getting a bath than it would in getting its gas tank filled. Air from the pipes evaporates all moisture after the car has passed through a stall (extreme right) where it had a […]
Danish Furniture Knocks Down for Moving

Danish Furniture Knocks Down for Moving DESIGNED chiefly for sale in Europe’s war-devastated countries, this new line of Danish furniture sacrifices little in visual appeal. Modern in appearance, the simple, functional pieces are well suited to mass production methods. They can be quickly set up or taken apart, thus easing the moving problem on the […]
THINKING IN GLASS

By J. S. QUALEY MOST of our giant oil refineries have glass skeletons in their closets. Before they spill one drop of gasoline, lubricants or other by-products of crude into the pipe lines or the stomachs of water, rail and highway tankers, their efficiency at squeezing out every cubic centimeter of value has been planned and proved in glass models sitting atop stone tables in engineering laboratories. Actual creators of these refineries are the glass constructionists who fashion the prototypes. Typical of scientific glass blowers are three men in the laboratory of the M. W, Kellogg Company plant in Jersey City, N. J.â€”master glass constructionist T. A. Graf, and his staff of two, Robert Connelly and James Margiotta.
Tiny Tube for Hearing Aids

This tube is about the same size as an entire modern hearing aid. Tiny Tube for Hearing Aids Only 3/4-inch long and 3/8-inch wide, tubes like this powered such war devices as walkie-talkies and mine detectors. Now their maker, Sonotone, is using them in hearing devices. Three of them go into Sonotone’s latest instrument, which […]
Pepsi Ad

Budd's new assembly line rolls out cars like cans. By MORTON C. WALLING AS YOU stand on a catwalk high above the plant you can scarcely see where it ends, dim in the distance, five city blocks away. The workmen dwindle to mere specks, the gigantic U-shaped welders become tiny tweezers. Toward you stretch three long, silver caterpillars: assembly lines. Here and there comes a flicker of blue flame from an arc welder, reflected and reflected again from shining stainless steel. Occasionally there is a rumbling medley of thumps from shot welders; otherwise there is only a low hum from the thousands of workmen and machines. Here is modern technology in actionâ€”the assembly-line system the auto industry made famous. But as the great cranes swoop down along the line and the silvery bodies roll nearer and nearer you can see they are too shiny for automobilesâ€”and too big. Each is as long as half a dozen motor carsâ€”a stainless steel railway coach.
TELEVISION on the JOB

It extends human vision beneath seas, into furnaces and throughout factories. TELEVISION is adding overalls to its dress clothes. Its sleeves are rolled-it is ready to go to work! To most of us, television has been a promise of armchair entertainmentâ€”a chance to have choice seats at boxing bouts, football games, news events and stage plays without budging from the budget or the living room. That phase of television is here, but television's future goes far beyond the mere prospects of animated quiz shows and soap operas you can see. Television, like radio, is a versatile tool. A relatively small percentage of the radio waves that flash around the earth today carry music and comedy to our loudspeakers. Most of them have more important missions. Radio helps us go places and do business. Without it, large-scale scheduled air travel would be impossible, sea travel would be slowed, crime prevention hampered, news coverage cut down, and international business and diplomacy limited.
Edison's Magnificent Fumble

By ROBERT D. POTTER AMERICA'S No. 1 inventor just missed one of the greatest inventions of all time. But he discovered the clue that enabled others to perfect it. Most of those who currently celebrate the 100th anniversary of the birth of Thomas Alva Edison at Milan, Ohio, on February 11, 1847, remember him for his electric light, talking machine, and moving pictures. Many recall, too, his stock ticker, multiplex telegraph, storage battery, fluorescent lighting, and Portland cement. Perhaps few, in contrast, ever heard of the Edison effect, to which we owe the vacuum tube and the marvels built around itâ€”radio, television, radar, electron microscopes, atom smashers, and unknown wonders still to come.
Bazooka Turns Pitcher

Bazooka Turns Pitcher Using the tube of a bazooka he carried during the war, Pete Wald, a New York optometrist, devised. the mechanical baseball pitcher shown below. The tube carries the balls to a motor-driven throwing arm.
PROFESSIONAL TELEGRAPH PRACTICE SET

Send and Receive Code with this PROFESSIONAL TELEGRAPH PRACTICE SET Same as used by U. S, Signal Corps. Learn code quickly and have loads of fun with your “private” intercom system. Only $9.95 Complete with everything. No distance limit between stations. Send $2.00 with order, pay balance to postman. Satisfaction Guaranteed! AUDIO SALES CO. 11 […]
How PHONOGRAPH RECORDS are made

How PHONOGRAPH RECORDS are made PSM Picture Story by ROBERT F. SMITH and HARRY SAMUELS THE silent black disk that makes noises when needled is chiefly shellac, lampblack and limestone. In its manufacture, however, pure gold, wax, glass, copper, nickel and sometimes chromium are used by the craftsmen who operate the intricate and delicate machines […]
Whizzing on Fizz

Latest Rural Head Lines Bifocals Blackout Bulls. Farmers know a bull won’t charge when he can’t see. The Masbruch halter above, produced by the Russell Mfg. Co., Platteville, Wis., lets a bull walk and graze, but when he lowers his head to charge, his vision is blocked. Horse Specs. Now come goggles to protect the […]
Firecycle

Firecycle. Another specialized piece of equipment used by Douglas at El Segundo is this three-wheel motorcycle, which provides extreme mobility and permits close-quarter firefighting in narrow aisles or other confined places anywhere in the sprawling plant. It has been rebuilt to carry chemical equipment over the rear wheels, where separate recesses contain two 30-pound Du-gas […]
Electronic Color Television is Here

ALL-ELECTRONIC color television, which RCA engineers have achieved in a form that does not make black-and-white equipment obsolete, is a complete departure from the mechanical color transmissions of recent years. Mirrors and photoelectric cells replace moving parts. In a recent demonstration at Princeton, N. J., pictures were broadcast with a new color-slide camera. Its developers plan laboratory transmission of live-action studio scenes by mid-1947, outdoor action scenes late in 1947, theater-size pictures in 1948.