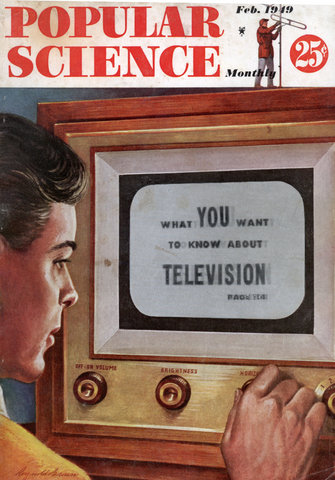 Jun, 1949
What You Want to Know About Television

Buying a TV set? Here are some practical suggestions to help you decide what you want for how much. By Carl Dreher Drawings by Jere Donovan "How big a set should I buy?" "How can I tell what's a good buy?" "Should I install it myself?" "How about the antenna?" "Where should I put the set?" "What about fire and shock hazards?" "What's the best place to buy a set?" THESE are the questions people are asking about television. Last year a novelty, the galloping postcards now threaten the automobile as the center of family interest. Grownups stare respectfully at moth-eaten movies that wouldn't pull customers in a free theater. Children are fascinated into silence.
The Truth About "Experimental Animals"

DO you like dogs? Then you should read the article, "Science Tries You Out On the Dog," on page 151. Not only does it tell you some things about dogs nobody knew before; it will also give you an idea of what animal experimentation is all about. You should know that your liking for dogs is lending silent support to an organized campaign against the use of experimental animals. Your sense of human decency is being used by a few willful people to threaten anyone who questions their motives. These people are crazy about dogs. Literally crazy in some extreme cases, where it isn't that they love dogsâ€”but that they hate humans.
Your Phone Dial Computes Your Bill

Your Phone Dial Computes Your Bill This new electrical brain now makes long-distance dialing possible. PS photos by Hubert Luckett ONE of the biggest obstacles to making long-distance telephone calls without speaking to an operator has been overcome: a machine has been built to see that you are properly charged for such calls. It’s a […]
Early OCR

Experimental eleetronic device looks at printing and says what it sees â€” at the rate of 60 words a minute. By Martin Mann PS photos by Hubert Luckett SOME time ago, The New Yorker magazine satirically described the invention of a reading machine. "It is obvious," a fictional Professor Entwhistle was quoted as saying, "that the greatest waste of our civilization is the time spent in reading. We have been able to speed up practically everything. . . . But today a man takes just as long to read a book as Dante did. ... So I have invented a machine. It operates by a simple arrangement of photoelectric cells. . ." A simple arrangement of photoelectric cells that will read a book for you now has been unveiled by RCA researchers. The device looks at printed matter and reads it aloud, letter by letter. It sounds like a radio announcer spelling out "R-I-N-S-O."
Polaroid Premiere

Camera Gives Print in a Minute NOW you can snap a picture and see it only a minute later. The camera that does this is an entirely new type. It’s the first production model of the Polaroid Land Camera (PS, May, ’47, p. 150). It costs less than $100. The camera uses a special film […]