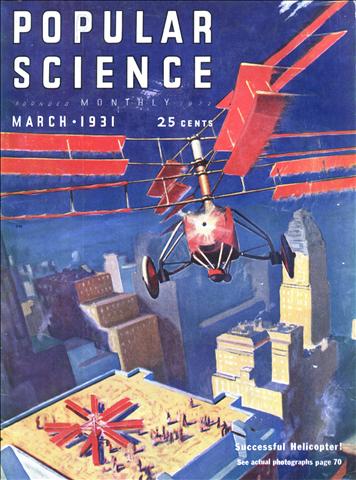 New Power Idea Proves Its Value in Practical Use As Quicksilver Vapor Spins Electric Generator By EARL CHAPIN MAY WHEN, in 1914, William LeRoy Emmet, General Electric Company research engineer, first proposed that mercury vapor instead of steam could be used to drive a turbine wheel, scientists and engineers scoffed at him.
What It Means to Be Left-Handed

By JOHN E. LODGE ARE you right-handed? Perhaps you only think so. There is one chance in ten that you are ambidextrous, or "two-handed," without knowing it. If you are, you can learn to use your left hand as well as your right, and immeasurably increase your efficiency in work and sports.
San Francisco to Have World's Greatest Bridges

SAN FRANCISCO, isolated for years on a narrow peninsula, is to be linked at last to the mainland at the north and east. Next April, construction will start on the Golden Gate Bridge —greatest suspension bridge ever built, and the first to span the outermost entrance to a great harbor.
"Stay home-and gargle with Listerine every 2 hours"

Reduces mouth germs 98% THAT is what your doctor would probably tell you to do if you had an ordinary cold or simple sore throat. Combined with rest and warmth, it is an excellent treatment. Over and over again this has been proved in the past 50 years. These ailments are caused by germs multiplying by millions in the mouth and throat. They are continually striving to overcome the forces of health in your body. They often succeed when body resistance is lowered by such things as wet feet, fatigue, lack of exercise, exposure to draughts, cold, sudden changes of temperature.
Weird Futurist Designs Found by Camera in Modern Industry

Weird Futurist Designs Found by Camera in Modern Industry You may get lost in the dizzy maze of triangles shown above, but it is only one of the surprising modernistic designs now found in the world of machines. This shows what you would see if you looked down one of the 820-foot masts of the […]
COSMIC RAYS MAY FORECAST WEATHER

COSMIC RAYS MAY FORECAST WEATHER Cosmic rays may help to prophesy the weather. This first practical use for the mysterious radiations from outer space was recently announced by Dr. R. A. Millikan, Calif. Institute of Technology physicist. The “cosmic rays” are more penetrating than radium or X-rays, but it is not known whether they affect […]
Electricity May Supplant Nets in Taking Fish

Catching fish by shocking them with electricity is an experiment being tried by the Australian State Fishery Station, at Sydney Bay. A fishing boat has been fitted with charged electrical grids or electrodes of copper that are submerged in the water. Powerful electric generators force a current through the water between the electrodes, shocking all near-by fish, which then float to the surface and are picked up alive in large nets.
MOTORISTS WARNED TO LOOK OUT FOR PLANES

MOTORISTS WARNED TO LOOK OUT FOR PLANES Planes swooping in for a landing at the Grand Central Airport in Glendale, California, must cross a motor road at such low altitude as to menace cars. In order to prevent collisions between planes and cars, authorities at the field have erected a highway sign at this point, […]
TARANTULA'S BITE FAILS TO KILL

Not that I think tarantula bites are actually fatal, but it doesn’t help make their case when they describe an arachnid as an insect. Not to mention that Prof. Fattig is way scarier looking than the spider. TARANTULA’S BITE FAILS TO KILL Professor P.W. Fattig, curator of the Emory University Museum in Atlanta, Georgia, made […]
NEW ELECTRIC TRUCK STEERED WITH FEET

The operator of a new German industrial truck stands on a small platform mounted on a horizontal axle. Tilting it to one side or the other by pressure of his right or left foot steers the vehicle to right or left as desired, leaving both hands free to control power and brakes. Steering by the operator's platform in this fashion makes a compact machine, with the greatest amount of loading capacity on the shortest wheelbase and turning circle.
Will Autogiro Banish Present Plane?

By ASSEN JORDANOFF I HAVE just had the biggest thrill of my twenty years of flying. I have piloted an autogiro. And I have seen this amazing windmill plane "do the impossible." It is, I am positive, the flying craft of the future. At Pitcairn Field, fourteen miles from Philadelphia, Pa., James Ray, chief test pilot for the Pitcairn-Cierva Company, explained the design of the strange machine and took me for a passenger hop. We landed at the far side of the field. The spinning windmill over our heads slowed down. Its four yellow vanes, long and slender like blades of grass, drooped to a standstill above the bright green fuselage. Ray climbed from the rear cockpit.
SUPER-ROBOT SPEEDS PHONED TELEGRAMS

When a New Yorker calls one of the city's principal telegraph companies on the phone to send a wire, he now sets in motion a super-robot so swift that a stopwatch often cannot time it. Within the short space of one second, on the average, he hears the answering voice of one of 110 girls, who sit at desks as shown in photo above. This is made possible by the "automatic call distributor, " called one of the most important inventions in recent years.
AUTOMAT CLEANS AND PAINTS GOLF BALLS

AUTOMAT CLEANS AND PAINTS GOLF BALLS Drop a coin in the slot and this machine will automatically clean and paint your golf balls. Electric mechanism dips the ball in a mixture of lacquer, then holds it in a strong current of warm air and when dry delivers it to the player ready for use. One […]
Will You Lose Your Job Because of A New Machine?

By MICHEL MOK AN ENGLISH watchmaker's apprentice named John Kay, in 1738, invented a flying shuttle for weaving cotton. This was the first modern labor-saving device and with its aid, one man could do the work of two. To the amazement of the young inventor, a roar of protest rose from the English weavers when it was introduced. Thirty years later, Kay aided in the development of a second labor-saving device, the spinning jenny. When this was installed in the English cotton factories, riots broke out. An American manufacturer named Lloyd Raymond Smith, president of the A. 0. Smith Corporation put into operation at Milwaukee, Wis., in 1920, an automatic plant for making automobile frames. His monstrous machinery turns out steel automobile frames at the rate of 10,000 per dayâ€”one every eight seconds of the day and night. ' Two hundred men do the work of 2,000. Only fifty of them actually touch the frames. Without doubt, the Smith plant is the most complete instance of the use of labor-saving methods to be found in the world.
CIGARETTE IS LIGHTED BY SCRATCHING END

That’s actually a kind of cool idea. CIGARETTE IS LIGHTED BY SCRATCHING END Cigarettes that light themselves without matches have been made before, but this novelty in a new form has just been introduced by a San Francisco manufacturer. Ten cigarettes are packed in a box, each provided with a tip of yellow composition. Scratched […]
NATURALIST, POSING AS CACTUS, SNAPS DESERT ANIMALS

NATURALIST, POSING AS CACTUS, SNAPS DESERT ANIMALS No Sherlock Holmes of fiction ever disguised himself with more versatility than Arthur N. Pack, president of the American Nature Association. When this well-known naturalist wants to approach timid animals in their native haunts, without frightening them out of range of his camera, he dons an appropriate costume. […]