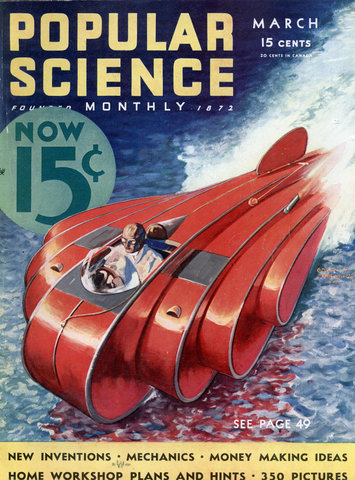 An airplane that jumps into the air, like a grasshopper, is reported to have performed successfully in trial flights at an Alhambra, Calif., airport. Alonzo Mather, inventor of its boosting gear, sees possibilities for it in enabling airplanes to take off from the restricted space of a ship's deck or a small field bordered by trees or cliffs.
TIED DOWN HOUSE IS HURRICANE PROOF

I’d say these people drastically underestimate the power of a hurricane. TIED DOWN HOUSE IS HURRICANE PROOF Even the force of a hurricane will not unroof the house of one Florida home owner, or sweep it from its foundations, for the house is tied down. After witnessing the disastrous experiences of some of his neighbors […]
GLOBE STORES LIGHT FROM ELECTRIC BULB

Something tells me this didn’t work quite as well as the inventor claimed. GLOBE STORES LIGHT FROM ELECTRIC BULB Storing light in a globe was a feat recently demonstrated by Ethan I. Dodds, America’s most prolific inventor, whose collection of more than 2,000 patents was exceeded only by those of the late Thomas A. Edison. […]
HIDE CAMERA IN COW'S SKIN

If this had been in Mechanix Illustrated they definitely would have made a joke usingthe two meanings of the word hide. Popular Science is so stuffy! HIDE CAMERA IN COW’S SKIN Stretched over wires and padding, a cow’s skin is now part of the photographic equipment of the California State Fish and Game Commission. The […]
TELESCOPE EYEGLASSES MAKE THE BLIND SEE

TELESCOPE EYEGLASSES MAKE THE BLIND SEE Telescope eyeglasses, just perfected by a New York optometrist, will enable forty percent of persons incapacitated by blindness to return to normal work, the American Academy of Optometry was told recently. The powerful lenses enable a patient with only two per cent of normal vision, ordinarily classed as total […]
Sea Gull Boat Skims Water at Seventy Miles an Hour

SKIMMING the surface like a gull, a speed boat that rises clear of the water has just completed its first trial runs successfully at Marshfield, Ore. It resembles a hybrid between an airplane and a water craft. Plywood-covered fins, shaped like airplane wings, extend from the sides in three successively smaller steps. By lifting the boat into the air, they virtually eliminate water friction on the hull and permit seventy-mile-an-hour speed without using unusual power.
WINDPROOF SUIT TO AID MT. EVEREST CLIMBERS

Does it also include scientificially designed windproof cigarettes? What does scientificially mean anyway? Is that a combination of scientifically and officially? It’s officially scientific! WINDPROOF SUIT TO AID MT. EVEREST CLIMBERS Windproof suits will be used by mountain climbers next summer, in a new attempt to reach the 29,141-foot summit of Mount Everest in Asia. […]
Corkscrew Plane for Vertical Flight

Corkscrew Plane for Vertical Flight Can an airplane be built that will fly straight up? Many odd crafts have been built in vain attempts to solve this problem, but J. P. Sellmer, of Stinson Beach, Calif., is pinning his hopes to one of even stranger design than most. His corkscrew airplane, according to him will […]
Specially Designed Trucks Speed Door-to-Door Deliveries

Specially Designed Trucks Speed Door-to-Door Deliveries Automobiles are about to threaten the last stand of the horse and wagon. New trucks designed especially for door-to-door deliveries have been introduced almost simultaneously by several makers, to speed the milkman, the baker, and others on their daily rounds. Their controls are ingeniously simplified so that the driver […]
Amazing New Uses Found for Wood

Amazing New Uses Found for Wood HERE, as suggested by our artist, are unexpected new uses to which the by-products of American timber are now being put. The waste from logging camp and sawmillâ€”in some regions more than half of the wood actually cutâ€”is reclaimed by the magic of chemistry and goes into the manufacture […]
Odd Designs on Film Turn to Music

SYNTHETIC music is being produced in a German film studio by reversing a familiar process. When artists sing and orchestras play "before the talkie microphone, their music is recorded, in one standard method, as a wavy black line upon the sound track of the film. What would happen if an artist were to draw arbitrary shapes, imprint them on sound film, and run it through a reproducer? A German technician, Oscar Fischinger, recently tried the experiment with startling results. A series of concentric circles, drawn in a strip and photographed upon sound film, imitated an electric bell. Eye-like spots reproduced a bassoon, and a pattern of dots sounded like a xylophone.
120 Miles an Hour with Seven Horsepower

120 Miles an Hour with Seven Horsepower More like a war tank than a racing car appears the. seven-horsepower machine just completed for George Eyston, noted British racer. Its design is expected to permit speeds in excess of two miles a minute. The driver sits enclosed within a streamlined, cabin-like frame of steel fitted with […]
WALKER CAN TUNE IN WITH RADIO IN CANE

WALKER CAN TUNE IN WITH RADIO IN CANE So that a pedestrian may enjoy broadcast programs wherever he goes, a German, inventor, Alfred Mintus, has devised what he calls a “radio walking stick.” Outwardly it resembles an ordinary cane, but the interior contains a miniature receiver and batteries. The user has merely to plant the […]
NEW SAFETY RAZOR HAS OSCILLATING BLADE

NEW SAFETY RAZOR HAS OSCILLATING BLADE Especially designed for those with tender skins and tough beards, a new safety razor employs an oscillating blade to cut the hairs. While the razor is drawn across the face, a pair of friction rollers revolve and cause the whole blade to move sideward with a reciprocating motion, as […]
Giant Voltage May Blast Atom

Giant Voltage May Blast Atom Man-made lightning will soon flash in a blimp hangar at South Dartmouth, Mass., where a fantastic machine to harness the power of 10,000,000 volts is nearing completion. Sitting inside one of its two hollow spheres of aluminum, nearly fifteen feet in diameter, an operator will apply the huge voltage to […]
CAR'S STEERING WHEEL IS INSTRUMENT PANEL

CAR’S STEERING WHEEL IS INSTRUMENT PANEL All the instruments needed for ordinary driving are mounted directly on a new automobile steering wheel. In this position they are plainly visible. Connections to the instruments are led through the hollow post of the wheel.
SHIP'S PASSENGERS ARE LANDED WITH DERRICK

SHIP’S PASSENGERS ARE LANDED WITH DERRICK Scenes like that in the photograph below, suggesting a thrilling sea rescue, take place when visitors land on the jagged coast of Hamakua, Hawaii. There small boats bring passengers within range of a derrick-like landing gear that has been erected en a cliff. One by one, the passengers are […]
NEW ZEALAND BOYS COAST ON MUD

NEW ZEALAND BOYS COAST ON MUD American boys wait for a good snowfall to get out their sleds, but any day is a good day for coasting, in New Zealand. Snow is a rarity in the even, bracing climate of the islands, so the youngsters do the next best thing and coast on mud! Wooden […]
New Mechanical Devices Make Housekeeping Easy

TAKES OFF CRUST. Slowly pushing this tool into a loaf of" bread as far as it will go, removes the entire crust at once. This leaves the loaf all ready to use in making round sandwiches TAPE IN PHONE DIAL CASE. A tape fifty feet in length is enclosed in a case designed like phone dial CLOCK RUNS GAS HEATER. With the clock control device shown below, a gas heater is turned on or off. It can be set to keep the gas burning for any desired time up to an hour PERFUMES CLOTHES As a flatiron is passed over the block of paraffin, shown below, it is lubricated so it moves easily over the clothes and as the paraffin is perfumed, a sweet scent is added to the garments. The sheet of asbestos, made into book form, serves as an iron rest
MASKS TESTED WITH REAL POISON GAS

This doesn’t sound like a very safe idea… MASKS TESTED WITH REAL POISON GAS Tempting death daily is the lot of a few daring men in a London laboratory, where a steel-walled chamber containing an appreciable quantity of real poison gas is reported in use to test the air-purifying canisters of military gas masks. Masked […]
WALKING IN TREADMILL DRAWS WATER

WALKING IN TREADMILL DRAWS WATER A British country dweller walks a quarter of a mile to get a drink of water, without leaving his own cellar! To raise the large bucket in his 300-foot well, Fred Hoare, of Beauworth, Hants, installed a twelve-foot treadmill beside the shaft. When he steps inside it to take his […]
NO WIRES ON RADIO KNIFE

Wow, that looks …um… positively terrifying! NO WIRES ON RADIO KNIFE Surgeons hail a new radio knife, devoid of wires, as an outstanding advance. Previous types have long employed high-frequency currents like those of radio, led through a dangling cord, to make clean, bloodless cuts in tissue. The latest apparatus dispenses with any electric connection […]
SALT, GROWN ON STICKS, HARVESTED FROM SEA

SALT, GROWN ON STICKS, HARVESTED FROM SEA Salt is being “grown” on sticks, in a new process of harvesting it from sea water that has been successfully applied at Alexandria, Egypt. Water from the Mediterranean Sea is admitted to large tracts along the coast, which have been planted with rows of poles. The inlet from […]