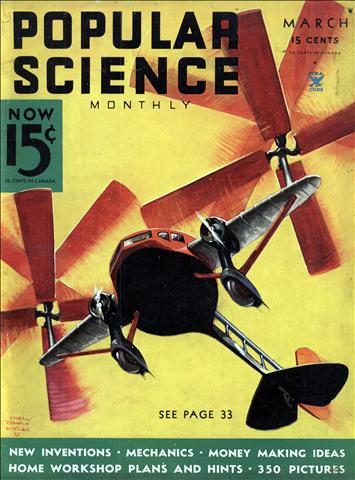 RUBBERS FIT IN UMBRELLA Completely equipped for rain is the user of a two-in-one umbrella containing a pair of rubbers within its handle. Tightly rolled to occupy little space, they are withdrawn in a jiffy as shown above. When the handle is in place, as below, the umbrella appears to be an ordinary umbrella, in […]
Why take chances with eyes?

The crazy thing is you can still buy a 100-watt light bulb for about 25 cents in today’s dollars. Why take chances with eyes? Good light costs so little Eyesight is priceless . . . good light is cheap. Why take unnecessary risks? You can buy a genuine 100-watt Edison Mazda lamp, the size that […]
Boom in Bands PUTS AMERICA IN MARCH TIME

TWENTY THOUSAND American communities support school bands which are trained by experts and stimulated by colorful national tournaments. This amazing new movement, transforming the old "town band" into a crack musical organization, is described by Mr. May, who recently told of the similar boom in drum and bugle corps By Earl Chapin May FOR three hot hours of a June Saturday, an excited multitude in Drake Stadium, Des Moines, Iowa, watched bands from Massachusetts, Colorado, Michigan, Ohio, and Iowa contend for prizes in marching. The spectators cheered like football fans when the marchers joined 5,000 other boys and girls and closed the Eighth Annual National High-School Band Contest by a thrilling rendition of Sousa's Stars and Stripes Forever.
SAFETY PHONE GUARDS AGAINST EXPLOSIONS

If they had already perfected explosion-proof telephones in 1935, why can’t I use my cell phone at the gas station? Has this miraculous technology been lost? SAFETY PHONE GUARDS AGAINST EXPLOSIONS A new type of explosion-proof telephone, exhibited in Chicago, is a recent addition to the roster of curious safety appliances developed especially for use […]
Flying Whirligig Is Newest Aircraft

A "FLYING WHIRLIGIG" combining the principles of the standard airplane, the autogiro, and the helicopter, is envisioned by a Glenn Dale, Md., inventor, just granted a patent. His design calls for a main wing of conventional form, having at each extremity a set of windmill-like vanes, or "booster-copters, " arranged to rotate freely when the craft is in motion; their lift aids the main wing to support the machine.
SALVAGE MEN CLIMB UP TO DISMANTLE A WRECK

SALVAGE MEN CLIMB UP TO DISMANTLE A WRECK French salvage engineers are tackling an unusual job in the Mediterranean. The Nicholas Paquet, a vessel plying between Marseilles and the coast of Morroco, grounded on the rocks, and remained with its stern rearing high in the air and its bow buried in the waves. Salvage men […]
TOWER IS SCHOOL FOR PARACHUTE JUMPERS

TOWER IS SCHOOL FOR PARACHUTE JUMPERS So that novices may learn the sensations of parachute jumping and acquire confidence before they venture to leap from a plane, the Soviet government has established a training tower at Moscow that is believed to be the first of its kind in the world. A spiral stairway leads to […]
Odd Machines Put Fun in Movies

By John E. Lodge MOVIE studio men were stumped when a comedy script called for an oyster that would open its shell and wink one eye. But a New York maker of comedy props welcomed the job. A few days later, he appeared at the studio carrying an ingenious shell made of papier-mache. The two halves opened and closed on a spring hinge and an eye within winked when a studio man pulled a hidden string.
SNOWSHOE-SHAPED RACKET MAKES TENNIS EASIER

SNOWSHOE-SHAPED RACKET MAKES TENNIS EASIER Designed to distribute strain evenly, a curious new tennis racket has made its appearance in England. The shape of its frame suggests that of a snowshoe. Branching arms form a “V” with a short handle at their bottom and a webbed oval for striking the ball is enclosed between them […]
FIFTEEN TIME-SAVING Household Inventions

CHILD'S EATING SET. This practically unbreakable outfit will save the family china. The dish is divided into compartments for food, and has a well for the tumbler. A flange on the edge makes it almost impossible to tip it over INDIVIDUAL PERCOLATOR. Coffee can be percolated right in the cup with this clever device, which has a 220-watt immersion-type heater in the middle of the coffee basket. It may also be used as a heater for water or milk
THIEF STEALS RODS OFF WASHINGTON MONUMENT

THIEF STEALS RODS OFF WASHINGTON MONUMENT One of the strangest thefts on record was revealed recently with the reported disappearance of 107 miniature lightning rods that were being substituted for older ones atop the Washington Monument. Apparently an audacious thief had taken advantage of the huge scaffold used in renovating the monument to commit one […]
Planes That Go Straight Up OPEN NEW FIELDS FOR AVIATION

By Edwin Teale AMONG the skyscrapers of lower New York City, a few weeks ago, a strange wingless craft drifted down in a vertical landing. Its wheels touched the concrete of a pier and rolled less than a dozen feet. With balancing wings eliminated, it represented the latest style in autogiros. The flying windmill has taken another step toward the goal of a thousand inventors, the helicopter. An autogiro can descend vertically; but it can take off only after a run. A helicopter could get out of a field the size of its landing gear. It could climb straight into the sky, could hover like a humming bird, and could drop like an elevator descending its shaft. Entirely new realms of aerial travel await the perfection of such a craft.