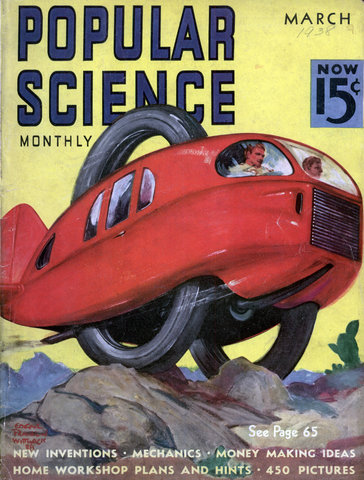 NEW FEATURES MOLDED TO SUIT ANY CHARACTER. A NEW era in the development of make-up for stage and screen is forecast by the introduction of a rubber plastic material that has been adopted for make-up use by Lucien Littlefield, screen star who specializes in character roles. Employed in the manufacture of gasoline-pump hose, printing rollers, and protective coverings for electric cable, the rubber plastic, developed by Du Pont chemists, makes it unnecessary to resort to painful skin-stretching, padding, and other uncomfortable expedients of the type used by the late Lon Chaney when he made himself up for character parts.
AMATEUR Dare-Devils GIVE MOTOR-CYCLE RODEOS

WEARING natty military uniforms and riding standard American-made motor cycles, a group of thirty-three amateur riders, all Los Angeles, Calif., business and professional men, recently won for the United States the International Motor-Cycle Trophy, emblem of world supremacy in acrobatic riding. Organized two years ago under the sponsorship of Victor McLaglen, motion-picture star, these dare-devil amateurs spend their spare time learning new tricks and giving thrilling exhibitions of stunt riding in western cities. Their coveted world title was captured from a team in Mexico City, which previously took it from the police team of London, England.
Prevent a Cold with Alka-Seltzer

THIS EFFECTIVE WAY TO CHECK COLDS AT the first sign of a cold, just drop one or two Alka-Seltzer tablets into a glass of water. When they bubble up and dissolve, drink the crystal clear, pleasant-tasting solution. Its beneficial action starts immediately. Continue using Alka-Seltzer according to the directions for colds as explained in the direction sheet in every package of Alka-Seltzer.
Just what does this word Fascist mean, Henry?

"It comes from Fasces, a bundle of rods and an ax that you see on this dime. Our New Merriam-Webster gives this interesting story about Fasces:" "IN ANCIENT ROME this bundle of rods surrounding an ax was carried before a magistrate as his badge of authority. It symbolized his power to enforce the law through flogging or beheading. In Fascist Italy, the Fasces now stands for the unification of all the nation's forces into a single powerful authority." WHEN you read in the news about the Nine-Power Treaty, you can turn to the New Merriam-Webster for quick, accurate facts about what it means for China.
BUILDING A WORLD'S FAIR

By EDWIN TEALE FIFTY MILLION visitorsâ€”a number equal to nearly half the population of the United Statesâ€”are expected to journey next year to the New York World's Fair. With lights and flame, motion and sound, this $175,000,-000 show will dramatize the progress and the promise of science. It will reveal the World of Tomorrow as it is foreseen today. At this writing, the exposition site is a vast beehive of activity. The pounding of carpenters' hammers, the crash of pile drivers, the roar of dump trucks, the machine-gun rat-a-tat of riveters fills the air. Buildings seem to rise overnight. A thousand and one projects are being carried out at the same time. Roads, bridges, artificial lakes, transplanted forests, synthetic soils appear as though by magic. The whole story of the 1939 World's Fair is a story of science in action.
WHY WE DREAM

Here are a few of the most common nightmares that visit our minds during sleep, with the explanations given them by modern psychological experts By ROBERT E. MARTIN MYSTIFYING mankind for centuries, dreams still fascinate the psychologist. What causes them? How long do they last ? How many dreams do we have in "a night? Do men or women dream more vividly? What produces the familiar dreams of falling, flying, being chased by wild animals, and appearing unclothed in public?
Rifle Barrel Becomes Bugle for Musical Stunt

Rifle Barrel Becomes Bugle for Musical Stunt Using the barrel for a horn, an English musician can play bugle calls on a rifle. A trumpet mouthpiece is inserted into the muzzle and the bolt removed. The notes produced are shrill and piercing, but are said to be perfect in both tone and pitch. The originator […]
Two-Wheeled Car Runs on Giant Hoops

Two-Wheeled Car Runs on Giant Hoops Speeding across open fields or along highways, negotiating ditches, streams, and swamps, a novel vehicle designed by Glenn Bryant of Cleveland Heights, Ohio, runs on two giant rubber-tired wheels as indicated in the drawing above. Suspended on small guide wheels from the mammoth rims, the streamline body of the […]
Smoke Gets in His Eye â€” and the Pipe, Too

Smoke Gets in His Eye â€” and the Pipe, Too Smoking a pipe with his eye is the odd accomplishment of Alfred Langevin, of Canada. Shown below with a pipe stem held close to his right eye by a nose clamp, Langevin sucks smoke through an opening at the corner of his eye, which, doctors […]
Tank Tows Army Platoon on Skis

Tank Tows Army Platoon on Skis Sliding over the snow on skis, a platoon of soldiers was towed by a tank in recent winter maneuvers of the Russian army. With their rifles slung on straps over their shoulders, the infantrymen grasped ropes trailing from the rear of the tank, as shown in the photograph. The […]
Invalid "Fed" Cigarettes on a Stick

Invalid “Fed” Cigarettes on a Stick Because a patient with two broken arms was unable to hold a cigarette, authorities in a St. Louis, Mo., hospital devised the odd six-foot holder pictured at the right. A roommate lights a cigarette, places it in a hole in the end of the stick, and holds it to […]
Youngster Gets "Wings" at Age of Four

If my father had really loved me, he would have made me one of these. Youngster Gets “Wings” at Age of Four Valid until December 31, 2000, a novel airplane license recently issued by Australian air authorities entitles four-year-old Eric Morris to operate his homemade “flying flea,” shown in the photograph below. The diminutive craft, […]
Man's Legs Serve as Identification Card

As usual, when it was time to cast his character in Memento, they went with someone much more attractive. Man’s Legs Serve as Identification Card Theodosius D. Rockwell, of Portland, Ore., whose face is shown above and whose legs are shown below, says that he isn’t afraid of amnesia, or loss of memory. His legs […]