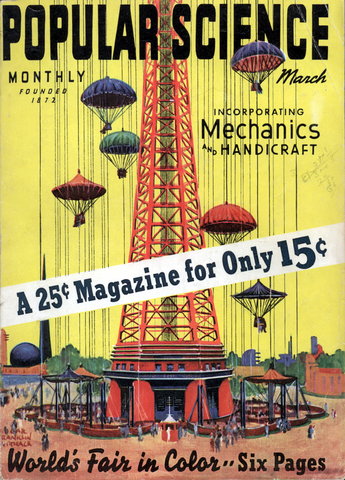 With lard as his medium, a prominent Chicago sculptor, Charles Umlauf, recently executed one of his strangest commissions. The result of his labors was a piece of statuary from which a big pig and a little one grinned at visitors to an international livestock exhibition.
Home Unit Extracts Vegetable Juices

Now you too can make juice! It’s almost as easy as changing a tire! Home Unit Extracts Vegetable Juices A NEW electric juice extractor makes it easy to prepare fresh-vegetable juices of every description at home. When carrots, beets, celery, spinach, fruits, and berries are fed into its motor-powered shredder, they are instantly reduced to […]
Raising Milk Goats Is Profitable New Hobby

AT SYRACUSE, N.Y., a few weeks ago, men and women from all over the United States gathered in solemn conclave to discuss the joys and problems of one of the fastest-growing and strangest business-hobbies in the countryâ€” the raising of blue-blooded milk goats. It was the third annual meeting of the American Goat Society, the youngest of three American organizations devoted to goat culture and the registration of goat pedigrees. Started thirty-odd years ago by a group of goat fanciers who imported a few pure-bred animals from Europe, pedigreed-goat raising now enrolls thousands of fansâ€”including movie stars, farmers, business executives, and housewives. Known officially by the fancy name of capriculture, the hobby already supports three magazines devoted to goat news, three registration societies, and at least a dozen breeders' organizations. Strange as it may seem to most Americans, who know only the smelly, comical-looking, tin-can-gnawing type of American goat, well-bred European and African milk goats are beautiful, intelligent, and affectionate creatures that remind one strongly of deer. They are scrupulously clean in their eating habits, and make excellent pets. Pure-blooded mature females, or does, bring from seventy-five dollars to $150 each, while a prize winner has brought as much as $2,000. Pedigreed bucks bring even higher prices. Bucks do smell a bit rank, even the well-bred ones, and for that reason must be kept by themselves in their own private barns or stables, but does are entirely odorless.
Film Star's Photos Printed on Pillows

Film Star’s Photos Printed on Pillows Not content with collecting photographs and autographs, star-struc movie fans in England go their American sisters one better by buying novelty pillow covers bearing the likenesses of their favorite movie stars. Almost life size, the pillow portraits are real photographs printed on the fabric by a photographic-printing process. The […]
No skinny man has an ounce of SEX APPEAL

“No skinny man has an ounce of SEX APPEAL” “But science have proved that thousands don’t have to be SKINNY” THOUSANDS OF THIN, TIRED, NERVOUS PEOPLE GAIN 10 TO 25 LBS… NEW STRENGTH QUICK -with Ironized Yeast Tablets Thousands of skinny, rundown people who never could gain before have quickly put on pounds of solid, […]
Primitive Fiber Optics

Piped Light Aids Surgeons and Dentists PIPED LIGHT, providing surgeons and dentists with powerful, sterile beams devoid of heat, glare, or the danger of electrical shock, is made possible by instuments molded from a transparent plastic which carries light around curves and bends (P.S.M March ’37, p. 43). The molded hand-held rodlike instruments have electric […]
License Plates, now with more Skulls!

I want a skull on my license plate! I also love the girls expression. Special License Plates Tag Careless Drivers Special license plates for traffic violators are being considered as a safety measure by Cliff Davis, commissioner of public safety in Memphis, Tenn. If the measure is adopted motorists who persistently break traffic laws will […]
Egg Aquisition Device

Old Horn Calls Egg Dealer “BLOW FOR EGGS” reads the odd sign over an old horn fitted with bellows and mounted on a roadside tree on an English poultry farm. A toot on the horn denotes the presense of a customer when the owner is working at a remote point on the farm.
Big Money from Poultry

Other sites bring you Friday Cat Blogging, I bring Friday Animals for Profit Blogging. I show you how to increase profits, or start your own business. I train you at home in spare time. My homestudy course will show you the latest methods and give you facts that can be worth money to you, or […]
Where's the man who doesn't THRILL to railroading?

I know I do.
Nonskid roll grips wandering weenie 
“AT LAST America has it – the nonskid roll for hot dogs! A clever inventor has devised the metal mold shown at left to turn out rolls imprinted with a series of ridges. They take a masterful grip upon the delectable but elusive weenie and prevent it from slipping from it’s rightful place to fall […]