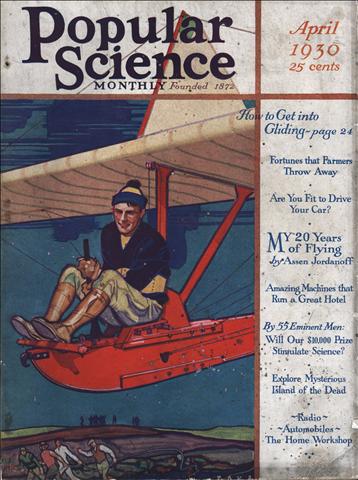 A scene at the new Police College established by the City of New York for scientific training of officers of the law—"rookies" receiving instruction in scaling walls, with the aid of ropes, to save life at fires.
Languages Now Taught by X-Ray

Remarkable Action Photos of Vocal Organs Disclose Secrets of Speech That Long Have Baffled Anatomists By GEORGE H. DACY A GOLD chain many times thinner than a watch chain, a set of X-ray photographs, and a few ingenious devices have just solved secrets of human speech that have baffled anatomists for centuries. The photographs on this page are of human subjects talking a foreign language.
PROGRESS AND DISCOVERY

Boring a Tunnel 9,000 Feet Up Completing a cogwheel railway up the Zugspitz, highest peak in the German Alps, workmen are driving a tunnel into the mountain at a height of 9,000 feet. Each day they travel to their job by cableway. Above: The lofty tunnel entrance, looking from within. At right: A view of the entrance in the mountain wall.
Once a week do this....

Invigorates scalp . . . CHECKS DANDRUFF WHENEVER you wash your hair—and most people do it once a week—douse full strength Listerine on the scalp either before or after the rinse. Then mas-sage the scalp and hair vigorously for several minutes. You will be simply delighted by the wonderful feeling of cleanness and scalp exhilaration that follows this treatment.
NEW IDEAS AND INVENTIONS

A Limousine Side Car. This latest in motorcycle luxuries, exhibited in London, has an inclosed body with sliding roof and windows, leather upholstery, and dashboard conveniences. At the rear is a luggage compartment which locks. Air Mail Catapult An improved portable catapult apparatus to enable a plane to pick up air mail "on the fly" is shown here during a recent test at Curtiss Field, N. Y. A cord stretched between two masts is caught by a hook lowered from the plane. An instant later a mail sack attached to the cord is shot forward at about the same speed as that of the plane.
INVENTS COMBINATION GLOBE AND ATLAS

Globe and atlas are combined in the invention by a Los Angeles, Calif., map maker, of a model of the earth with a complete index and gazetteer inside it. Inserted in the globe are two small windows containing magnifying glasses. Inside is a mechanism that reels past this reading glass a fifty-one-foot paper tape bearing place names and descriptions arranged alphabetically.
What We Burn Up Every Year

What We Burn Up Every Year (1). The total energy in gas burned in the United States in a year would run a 530,000-horsepower turbo-generated and supply electric light to New York, Vermont, and New Hampshire for 176. (2). A 3,300,000-horsepower turbo-generator could be driven by the energy in the coal burned in this country […]
First Photo Took 8 Hours Now - 20,000 in a Second

By H.C. DAVIS IN 1830, it required eight hours to take a photograph. The other day, Baron C. Shiba's remarkable camera recorded 20,000 pictures in one second (P.S.M., Nov. '29, p. 31). In this dramatic advance, which has taken place within a single century, a Parisian painter of stage scenery and a magic cupboard in his home workshop laboratory played leading roles. The painter was Louis Daguerre, who made photography practicable. Before his time, a few indifferent pictures had been made by the painfully slow process of exposing asphalt-covered plates all day and then treating them with solvents.
Machine Measures Thought but Is No Mind Reader

Thoughts, as well as actions, can speak louder than words, according to Dr. Milton Metfessel, of the University of Southern California, when they are hitched up to an ingenious device he has just invented. Those thinking processes which go on so silently within people's heads are, he says, actually the expression of powerful forces at work, nerve impulses flashing from one end of the brain to the other along complex networks of nerve fibers.
Modern Hotel is a Huge Machine

A Glimpse at the Mechanical Servants That Perform Superhuman Tasks Hidden from the Sight of Guests By ALDEX P. ARMAGNAC SIX o'clock in the evening. New-York's forty-three storied hotelâ€” the highest in the world above the street and the deepest belowâ€”is preparing to open its doors to the public at midnight. An army of workmen complete last minute jobs, engineers and managers hurry through the corridors. A flash and a sputter. Trouble on the sixth floor. A whole panel of electric fuses has blown out. Half the building is plunged in darkness. And only six hours before the opening.
NOVEL LIP FORM JUST STAMPS ROUGE ON

NOVEL LIP FORM JUST STAMPS ROUGE ON Raquel Torres, the famous film star, is responsible for a new device for lip rouging. A wooden stamp, shaped to the form of the lips and covered with rouge, is pressed against the lips, thus stamping the rouge on. The stamp comes in various sizes, to fit the […]
New Household Devices

Appliances, Machines, and Utensils Invented to Save Labor and Add to the Comfort of the Home Sweeping the kitchen is simplified by a sanitary dust chute of steel built into the baseboard. A swinging door opens at the touch of a foot lever, and sweepings go down the chute to the basement. The curtain "hold-back" at the right consists of a curved metal arm pivoted on a support fastened to the window frame. It draws back the curtain to admit more light.