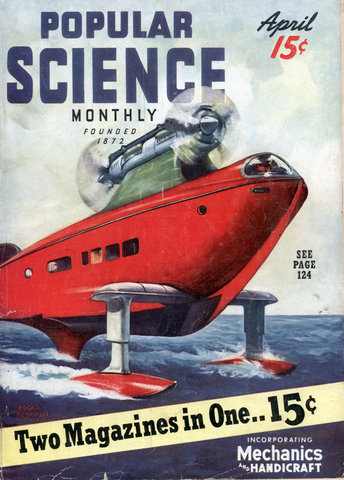 FIFTEEN times as large as the cockpit of a modern twin-motor transport, the huge control room pictured on this page is the nerve center of a seventy-four-passenger clipper plane, one of a fleet of six being constructed at Seattle, Wash., for transoceanic service.
Two Beds Built in the Space of One

A COMPACT DESIGN FOR SMALL QUARTERS FOR the summer cottage or cabin, or even a small city apartment, a pair of beds can be constructed so that one slides under the other as shown. The bed in the living room is therefore kept entirely out of sight until required, when it is pulled out like a huge drawer.
NOVEL THREAD RACK DEPICTS Little Miss Muffet

BECAUSE of its appeal to childhood memories, this "Little Miss Muffet" thread rack is a gift novelty of a unique and attractive type. The shelf, Miss Muffet, and her bowl are cut from plywood. The web consists of a center block bored to take twelve small sticks of varying lengths, around which some metallic gift-wrapping cord is wound.
MAKING Movie Actors Disappear

MAKING Movie Actors Disappear AN ACTRESS passes her hand down in front of her body—and her head, shoulders, waist, and feet vanish in succession from the screen. These views show how the disappearing stunt is done, in the recent motion picture “Topper Takes a Trip.” Projecting an individual frame of the film on a screen, […]
TIN-FOIL SCULPTURE

How One Man Makes Good Use of a Common Wrapping Material That Most of Us Throw Away THIRTY years ago, as a child, Paul E. Tichon began collecting scraps of tin foil. He still does. In the meantime, every scrap he could lay his hands on he has converted into hundreds of delicately hand-wrought pieces of "sculpture," some of which are illustrated on these pages.
Drinking Straw Pops Out When Bottle Is Opened

Drinking Straw Pops Out When Bottle Is Opened Don’t be surprised, when you open a bottle of your favorite soft drink, if a clean, sanitary straw pops out of the beverage. It’s the latest wrinkle in bottling and may make a fortune for its clever inventor. Inserted when the bottle is capped, the waterproof straw […]
Movie Slot Machine Shows Pictures of Latest News Events

Movie Slot Machine Shows Pictures of Latest News Events MOTION-PICTURE newsreels are on view for a nickel in a modern version of the old penny-arcade, animated-picture machine recently displayed at a Chicago, 111., convention of manufacturers. As shown at the right, the device has a motion-picture projector installed in the base of its cabinet. Film […]
Golf Game Is Right Up Bowlers Alley

Golf Game Is Right Up Bowlers Alley Features of both bowling and golf are combined in a novel indoor game recently introduced in Boston, Mass. Using a regulation golf club, a player hits a golf ball down a small-size bowling alley in an attempt to knock over diminutive pins. Three shots are allowed at each […]
Eyeglasses for Dogs

BY MENTIONING that her dog seemed nearsighted, a girl customer started an optician of Geneva, Switzerland, on his way to becoming a specialist in fitting canines with glasses. Not only did he succeed in curing her pet, but now he has found a novel and profitable career in applying his newly discovered methods to other four-footed subjects.
"Radio Man" WALKS, TALKS,AND YODELS

“Radio Man” WALKS, TALKS,AND YODELS TOWERING seven feet high, a strange “radio man” has just been completed after ten years of arduous work by August Huber, a Swiss engineer. Beneath its jointed steel body, the gigantic mechanical man is a maze of automatic switches, relays, and other controls. Microphones within the automaton’s’ ears pick up […]
Mechanics Masquerade as Men from Mars

Mechanics Masquerade as Men from Mars NOT weird, helmeted men from Mars, but merely airplane mechanics carrying metal propeller-hub protectors are pictured in the curious photograph reproduced above. Because of their unwieldy shape, the hub spinners were easier to carry when held over the heads of the workmen as they walked out to install them […]
Strictly Fresh Ideas for Easter Eggs

Strictly Fresh Ideas for Easter Eggs IF THE eggs used in making these novelties are blown’ by the method illustrated, the contents may be used for the table in the form of an omelet or scrambled. Clean the shell with soap and warm water, es–pecially if water colors are used in decorating. Sails, wings, legs, […]
FUN with QUICKSILVER

FUN with QUICKSILVER Mercury, the Liquid Mystery Metal, Offers a Fascinating Field of Experiment to Amateur-Chemistry Enthusiasts MERCURY seems to be nature's joke on the scientist. The only metal that is liquid at ordinary temperaatures, it still outweighs most solid ones-lead included. Volume for volume, among all the substances you encounter in your everyday life, only a few such as platiinum, "gold, and tungsten are heavier than mercury. Though it runs like water, it does not wet objects, and a drop of mercury in the palm of your hand is so elusive that it defies you to pick it up with your fingers.

MAGIC wands of "cold" light, rivaling the rainbow in their hues and the firefly in their efficiency, have come out of the laboratory to paint night scenes with new marvels of beauty. Perfected and ready for use after years of experiment by General Electric research engineers, these "fluorescent lamps," as they are called, apply a brand-new principle in illumination. By doing so, they reduce the cost of colored-light displays to a point where lighting effects hitherto possible only in theaters can be applied lavishly everywhere.
Suck the hair right out of your head

This reminds me of the playdough barber shop I had when I was a kid. The one where you stuffed a plastic head with playdough then rammed it through holes in the scalp like a pasta machine. YOUR HAIR Is it getting thin? Is it falling out? RENT A HOME MODEL CROSLEY XERVAC IF poor […]
Seedless Watermelon Produced by Student

Neon Signs Identify Police Patrol Cars Police cars assigned to the park districts of Chicago, Ill., are now fitted with roof-top neon signs so that motorists may identify them on the road at any time during the day or night. Within park areas, the police automobiles travel at legal speeds so that drivers may spot […]
"PEDRO" - THE FIRST MACHINE THAT REALLY TALKS

Voice-Operation Demonstrator Crowns Centuries of Effort by Scientists to Duplicate Human Speech Artificially HE HASN'T any mouth, lungs, or larynx-but he talks a blue streak. His name is Pedro the Voder, and you may see him in action at the New York and San Francisco world's fairs. His creation from vacuum tubes and electrical circuits, by Bell Telephone Laboratories engineers, crowns centuries of effort to duplicate the human voice. To manufacture Pedro's conversation, his operator employs a keyboard like that of an old-fashioned parlor organ. Thirteen black and white keys, fingered one or more at a time, produce all the vowels and consonants of speech. Another key regulates the loudness of the synthetic voice, which comes from a loudspeaker. A foot pedal varies the inflection meanwhile; so that the same sentence may state a fact or ask a question.