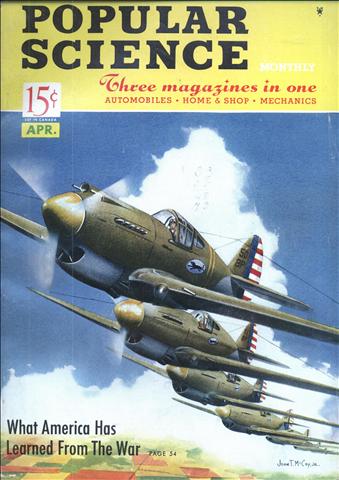 Basketball “Bumpers” Protect Eyeglasses “Bumpers” for basketball players now enable those who wear glasses to enjoy the sport. A transparent guard of unbreakable plastic, cut away to bridge the nose, completely surrounds the spectacles and insures them against being knocked off or shattered if struck. Supported by straps, the headgear is held away from the […]
LATEST SUBMACHINE GUN IS DESIGNED FOR MASS PRODUCTION

ANEW submachine gun which shoots .45 caliber automatic , pistol bullets at the rate of 500 a minute is now being- turned out by the Harrington and Richardson Arms Company, of Worcester, Mass., at the rate of 1,000 guns a day. Although in its present form the gun weighs only 6-1/2 pounds as compared with the 9-3/4-pound Thompson submachine gun and the U.S. Army's new 9-1/2 pound Garand rifle, the inventor, Eugene G. Reising, is confident that eventually he will cut its weight down close to the five pounds which the War Department considers ideal for parachute troops, air infantry, motorcycle riders, and the close-up work of mechanized units.
Trapping the Secrets of Color

QUIRKS OF COLOR Men prefer blue, women green. Poor children are attracted by red; richer ones by green. Red lights speed up human responses. Green lights retard them. HUMAN reactions to colors are being studied at various universities and other institutions. When the scientists have the data on which to base opinions, their findings will be influential in lighting and decorating schemes. Certain basic facts have emerged already. It has been determined that red is a stimulus and blue is soothing to most of the subjects.
Print Shop on Wheels Runs Off Race Programs at Track

There are more ways than one to lose money at a race track, and one of them is printing too many programs—or too few. If too many are printed the left-overs are wasted; if too few, betting falls off and the track loses money. So when Barnwell Ellicott, head of the Official Program Corporation, approached New York track managers with a plan for a mobile printing press that could turn out programs at the rate of 10,000 an hour just before the gates opened, the managers jumped at the chance.
Rubber Cord Used as Self-Starter for Light-Plane Engine

USING the principle of the rubber-band-powered model, William Strohmeier, of Lock Haven, Pa., recently demonstrated a new lightweight self-starter for engines on private planes. By turning a crank on the instrument panel of his Piper Cub monoplane, Strohmeier winds up a rubber shock-absorber cord that runs the length of the fuselage. Thirty turns of the crank stretches the cord to the required tension.
Driving Mittens Glow To Aid Hand Signals

Not *quite* as awesome as kitten mittens. Driving Mittens Glow To Aid Hand Signals Driving mittens with their backs chemically treated to glow in the dark have been introduced for motorists. Besides being useful for giving hand signals to following drivers, the mittens provide enough light to show up the keyhole in a car or […]
Puppet Movies

ACHIEVING a third-dimensional effect by combining puppets with actual sets. George Pal, 32-year-old Hungarian, has brought to America a new form of movie presentation. First of his color cartoons reached the screen recently as a nine-minute show. Instead of drawings, Pal uses wooden characters which perform on tiny sets, with synchronized music, songs, and special effects. Although the actors are puppets, there are no strings; for no Pal puppet ever moves. Instead, the artist places on the set a complete stationary figure for each phase of a movement.
Nickel Buys a Tune and a Phone Chat with a Girl as Well

COIN PHONOGRAPHS, or "juke boxes," widely used in taverns and restaurants, now are sometimes installed in a new form. Operated by telephone from central offices, they permit a selection of 300 or more tunes, as opposed to the 12 or 20 available on ordinary coin phonographs.
Steel Goggles Protect Eyes From Bomb Splinters

Steel Goggles Protect Eyes From Bomb Splinters Protecting the eyes from splinters and other flying objects during an air raid is the purpose of new-type goggles introduced in Britain. Made of sheet steel, the goggles are held in place by a strap. Holes approximately an inch in diameter cut in the metal permit good vision […]