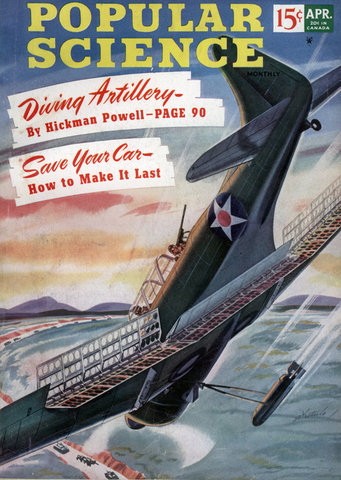 THE name is Lennox â€” Peggy Lennox. She may not look the part of a trainer of fighting men, butâ€” She is one of the few women pilots qualified to give instruction in the CAA flight training program. And the records show she's doing a man-sized job of it. She's turned out pilots for the Army ... for the Navy. Peggy is loyal to both arms of the service. Her only favorite is the favorite in every branch of the serviceâ€”Camel cigarettes. She says: "It's always Camels with meâ€”they're milder in every way."
Safety Belt Makes Chair Safe Seat for Child

Is this a safety device or an instrument of torture? It seems pretty cruel to strap the kid into a chair so that when his toy falls on the ground, which it undoubtedly will, it rests just out of reach. Also, I’m sure that if he tries hard enough the boy could find a way […]
TYPE BY GOUDY

FREDERIC W. GOUDY, Greatest American Type Designer, Has Left His Imprint on the World by Creating More Than 100 Beautiful Faces to Give Dignity and Simplicity to the Pages on Which Man Records His Dreams By ANDREW R. BOONE FUTURE generations will know Frederic W. Goudy as the man who left a greater imprint upon the recorded story of his time than any historian or craftsman living today. At 40, this short, plump, pinkish, and puckish gentleman kept books for a Chicago realtor, and considered himself a failure. During the next 36 years, starting almost from scratch at an age when most men are permanently set in their chosen vocations, he cut 113 fonts of type, thereby creating more usable faces than did the seven greatest inventors of type and books, from Gutenberg to Garamond. Now 76, he is the dean of twentieth-century designers.