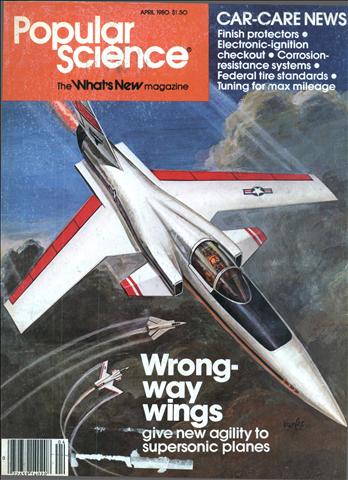 I haven't checked, but somehow I don't think the Guinness Book of Records has this one. Scientists at the IBM Thomas J. Watson Research Center claim they have made the world's smallest experimental circuit elements.
First gas-operated semi-automatic pistol

Self-loading handguns are usually either blowback-or recoil-operated. The new Wildey is unique—the world's first production-model gas-operated semi-automatic pistol. In the patented Wildey system, a portion of the powder gases is exhausted from the barrel through six ports, where it impinges on the operating piston, driving it rearward to operate the slide and rotary bolt action.
What's New IN ELECTRONICS - Sony Walkman

Hi-fi for joggers You don't have to jog when listening to stereo music from the Sony Soundabout cassette player—but you could. It's small, lightweight, designed to go anywhere, and produces high-fidelity stereo through its specially built headphones. Price: $199.95.
DELUXE QUALITY MOVIE VIEWER only $34.95

— no hookups — it rolls anywhere and lives off the sun and earth An ingenious structure integrates many energy-conserving technologies By EVERETT H. ORTNER PHOTOS BY THE AUTHOR AND KRISTEN PETERSON Was this the American home of the future—this cross between a submarine and a World War II Quonset hut, this metal half-sausage afloat on a sea of mud? Probably not. My hosts, its designer-builders, Ted Bakewell III and Michael E. Jantzen, had other objectives in mind for their Autonomous Dwelling Vehicle—even though it may well unite more house-of-the-future conservation concepts, technologies, and materials that have ever been brought together in one structure. Their goal was to build a trailerable structure that would: