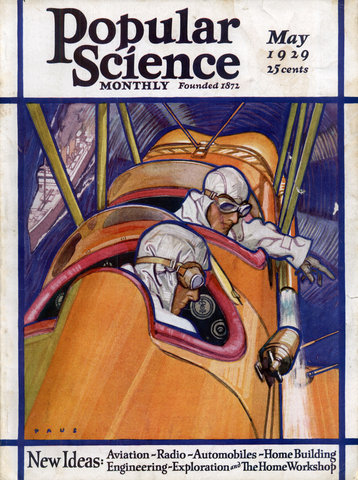 Loaded Freight Train, Hoisted Aboard by a Mammoth Crane, Is Swallowed by Ocean Ferryboat A LOADED train almost a mile long disappears into the hold of a monster ocean ferryboat, two thirds the size of the liner Mauretania, which recently began operating between New Orleans, La., and Havana, Cuba. The freight cars, hauled to the dock alongside the Seatrain, as the vessel is called, are picked up in cradles by a giant crane and lowered into the hold.
Glimpses of of Men in the Public Eye

WHEN, a little more than ten years ago, Edward R. Armstrong first propounded his idea of building a series of great floating airdromes and anchoring them at intervals across the Atlantic to provide way stations for a regular flying service between America and Europe, the public regarded it as a fantastic dream. Aviation experts took the idea more seriously. Armstrong's words, as consulting engineer in charge of mechanical and chemical experimental development for the Du Pont company, carried authority. Still, realization of the project was considered a thing of the dim future.
New Devices for Home Makers

Within a handsome table that stands unobtrusively against the wall is concealed a comfortable bed—the latest in space-saving furniture. If an unexpected guest arrives it is opened in a jiffy. This novel can opener with curved blade walks around" a can's edge of its own accord, it is said, when the handle is gently rocked back and forth. A hook on the utensil serves as a bottle opener.
Wherever the Admired and the Notable

Congregate—observe tlie overwhelming preference for Cadillac an d La Salle. The famous, the socially prominent, the most sophisticated judges of what is test in motor-cars, turn invariably and inevitably to the two most celebrated and sophisticated cars on the streets of the world.
Two Ears Now Can Listen at One Telephone

A TELEPHONE attachment which permits the user to listen to a long distance call with both ears, and incidentally allows two people to hear from a single receiver at the same time, has been designed especially for noisy offices. The device is a sound-distributing chamber which slips over the end of the standard telephone receiver and sends part of the sound through a rubber tube ending in a metal cup, similar to that on a doctor's stethoscope, which fits in the opposite ear of the user.
Hanging by an Eyelash!

The Fence Held A few thin bands of iron were all that saved this delivery car from a twenty-foot plunge over the brink, when it skidded and waltzed across icy pavement of a viaduct at Jersey City, N. J. The rear wheels tore a section of the iron fence from its foundation and went clear off the edge. There the car teetered precariously above the street — but the fence held.
The Story of C.A.M.O.A.H - The Motor Power Thieves

Corona Abrasion Moisture Oil Age Heat "He who robs me of my power steals that which enriches him not but prevents me from starting quickly and going somewhere with such ease and pleasure as never dreamed of in the world before." -{Apologies to Shakespeare)
Making a Telephone Talk Through Loudspeaker

"WILL you speak a little louder please?" That request is unnecessary for users of a new telephone loudspeaker invented by H.O. Rugh, of Chicago, Ill. The installation consists of a horn loudspeaker operating from the telephone receiver through an audio amplifier similar to amplifiers used in radio. The latter is supplied with current from the house lighting circuit and is contained in a small cabinet upon which the telephone instrument rests.
Strange Bridges

A shopping district is housed in the Ponte Vecchio, over the Arno River at Florence Italy. The roofed bridge is lined with stores' Building this viaduct across the gorge of a small stream near Nice, France, engineers saw that a central vertical support would clog the gorge. So they devised an unusual masonry arch support set at right angles to the span.
Play Tag with Dynamite!

IF YOU had the job of handling fifty-seven varieties of death in a day, could you keep your nerve? Could you avoid the one mistake that might blast you to kingdom come? Here is the thrilling story of experts who risk their lives to make high explosives safer for everyone to use. By EDWIN KETCHUM CANNONS boom and underground blasts rock the earth at one of the world's strangest laboratoriesâ€” the U. S. Bureau of Mines' experimental station at Bruceton, Pa. Here "explosive engineers" risk death a dozen times a day, handling nitroglycerin and deadlier substances, in an effort to find a blasting agent that miners, farmers, and highway engineers may use in safety.
"Don't be selfish"

HOW the world has advanced in machinery for drawing water for farms and gardens is told here in pictures from many lands. It's a far cry from the electric pumping machines on modern farms to this primitive pump worked by a revolving camel at a desert water hole in Egypt. Note the crude gearing. Projecting wooden- pins in one wheel engage rods in the other.
Milk Now Delivered in Handy Paper Bottles

Milk Now Delivered in Handy Paper Bottles A SPEEDY motorcycle,it is said, can haul as much milk in new paper containers, recently introduced by a New York dairy concern, as a wagon can deliver in glass bottles. The cone-shaped containers can be packed upright and inverted so that two quarts occupy little more space than […]
Planning high-speed business

An Advertisement of the American Telephone and Telegraph Company More than 95% of the telephone calls from one town to another in the Bell System are now on a high-speed basis. This holds whether the call is from New Orleans to Boston or from New York to Oyster Bay. Even if it is a long call, the operator in many cases now asks you to hold the telephone while the call is put through.
Africa Hunter Brings 'Em Home on Motorcycle

Africa Hunter Brings ‘Em Home on Motorcycle A MACHINE that can outrun beasts of the jungle is adding a new thrill to big game hunting in Africa. Donald Ker, an Englishman living at Gilku, in Northern Nigeria, recently introduced the motorcycle as a mount for his hunting trips in the Sudan. Already he has bagged […]
Helps You Pick a Cinder Out of Your Eye

Was this a really big problem at the time? Big enough that people needed to carry around portable cinder pluckers? I suppose that with all of the coal and wood fires that perhaps there were a lot more cinders, but still… Helps You Pick a Cinder Out of Your Eye A SAFETY-FIRST device, small enough […]
Students Now "Fly" without Leaving Ground

ALL the sensations of looping the loop. going into a tail spin, and flying blind through fog are afforded students of the Array Air Corps at Wright Field, Dayton, Ohio, by an ingenious "primer plane" that never leaves the ground. A miniature fuselage, fitted with a propeller, ailerons, elevators, and rudder, is attached to an electrically-operated framework, and in the cockpit a prospective pilot does his first "flying" in safety.
Eclipse to Check Einstein

Astronomers Journey Halfway Around the World to Study Five-Minute Spectacle, as the Moon Blots the Sun's Face By GEORGE LEE DOWD, JR. EINSTEIN'S theory of relativity receives a new test in the wilds of Sumatra in the Dutch East Indies on May 9, when leading astronomers of Europe and America study and photograph a remarkable five-minute total eclipse of the sun, for which they will have journeyed halfway around the world. The duration of the eclipse, and the fact that this island off the Malay Peninsula lies directly in its path, offer an unusual opportunity for scientific observation. The average eclipse lasts only from one to four minutes, and the longest possible duration of a total eclipse for a single observer is seven minutes and fifty-eight seconds.
The Man Who Made Radio Talk

And Gave the Movies a Voiceâ€”The Dramatic Story of Lee De Forest, Inventor of the Audion Tube By FRANK PARKER STOCKBRIDGE THE story of Lee De Forest, and of his long and bitter court struggle for possession of the basic patents on the audion tube, runs parallel to the history of radio. Like most great inventors, he has been maligned, ridiculed, baffledâ€”and all but beaten. Today he emerges victorious, vindicated in his. claim to be called the father of radio broadcasting. Here Mr. Stockbridge writes the drama of the timid, unsociable youth who set his face toward a goal and learned how to fight to win it. â€”The Editor.