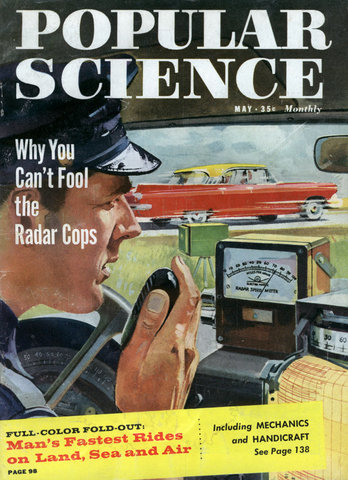 BOY’S DREAM. This nine-foot model of the Empire State Building, displayed in the lobby of the original by A, C. Gilbert Co., is made of Erector set parts. It took a total of 690 girders, 1,500 nuts and bolts, 83 man-hours.
Learning to live with The Sonic Boom

By Claude Witze With newer, faster supersonic planes, the sonic boom will become as inevitable and unavoidable as thunder. Since we can't escape it, the next best thing is to understand it. This article, condensed with permission from "Air Force-Space Digest," official journal of the Air Force Association, tells the story.
MONKEY SHINES

Do you think it killed them all afterwards? MONKEY SHINES It’s disconcerting when animals at the zoo take your picture. Here Duke, a prize chimpanzee at St. Louis’ Forest Park, snaps the director and trainers. At left, the result. Excellent contrast, too.
HELMET RADIO

EXOTIC metals that can survive the heat barrier of hypersonic flight soon will be mill-worked at a white-hot 4,000 degrees in a forbidding atmosphere of argon gas, similar to that inside an incandescent light bulb. Men working in this out-of-the-world gas-chamber metal mill will wear "space suits," trailing umbilical cords plugged into air-breathing and exhaust manifolds. Should a lifeline break, a man might live a minute or twoâ€”as helpless as if he were out in space or under water without an oxygen supply. Crash doors will provide a quick escape. But in case he is injured or some obstacle gets in the way, he will have an emergency air capsule to keep him alive until rescue comes.
The Man Who Opened the Door to Space

NO MAN made a greater personal contribution to this fearsome and challenging era of missiles than the late Robert H. Goddard, an ailing, publicity-shy physics professor from Worcester, Mass., who sought only peaceful scientific uses for his epochal inventions. This month, 14 years after his death at 62, the entire U. S. missile industry will honor him at a conference. "He was just as surely the father of modern rockets as the Wright brothers were of the airplane," Henry F. Guggenheim, noted patron of aeronautical research, has declared.
TOOTH ODOMETER

TOOTH ODOMETER. The distance a tooth will move in your head is measured by this instrument. It was designed by researchers for health studies. It spots movement of one 200-millionth of an inch.
FUTURE GI

TEN delightful, exciting MOVIES FANTASTIC OFFER ALL TEN MOVIES IN 8mm FOR ONLY $2 (16mmâ€”$4) The movie buy of a lifetime! Ten subjects, all different, brand new and thrilling, and all yours for only 20c each. You must be delighted or your money back! Rush $2 (cash, check or money order) to: SENSATIONAL MOVIE OFFER […]