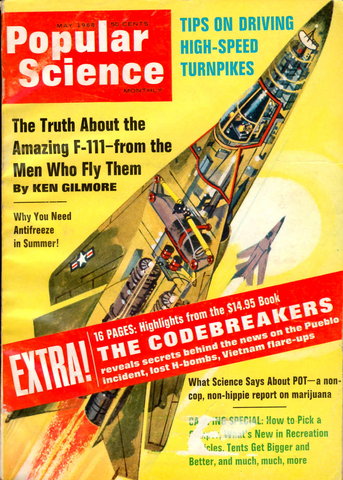 Peekaboo bag? No, a survival hood It’s too bad that the pretty (take our word for it) girl shown here has to play peekaboo to get her point over. She is demonstrating the use of a plastic “survival hood” for airline passengers. Made by the G. T. Schjeldahl Co., Northfield, Minn., it provides protection against […]
The Truth About Pot

TOM McCAHILL SAYS: “The appliance repair field is so uncrowded, it’s almost lonely!”
Crisp Bacon in 90 Seconds 
Crisp Bacon in 90 Seconds with INTERNATIONAL’S MICROWAVE OVEN People on the go will welcome an oven that makes cooking chores a pleasure. Imagine a “piping hot” TV dinner (frozen) in 3 and 1/2 minutes* instead of 20 to 50 minutes. Bake a potato in 5 minutes* instead of 60 minutes. Fry crisp bacon in […]
Early Airbags

Pillow protects you in auto crashes This “Auto-Ceptor” pillow is designed to prevent or lessen injuries in car accidents. Triggered by a crash sensor. it inflates in 1/25 second between the instrument panel and the driver and passenger. A model and dummy child demonstrate it here. It’s a joint product of two companies: Eaton Yale […]