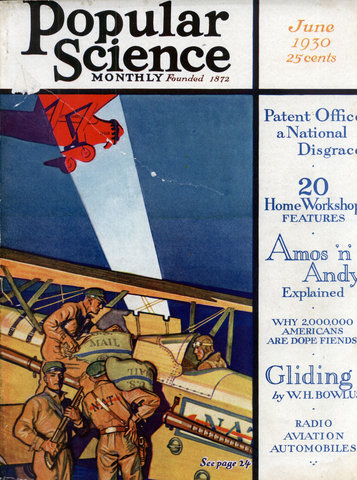 Jul, 1930
The Amazing Adventures of your SIRLOIN STEAK

YOU can't grow your own steaks. They have to travel — hundreds, maybe thousands of miles —to arrive at your kitchen in time for dinner. And every foot of the way they must he protected from heat. Steaks, nowadays, ride cool and comfortable, in refrigerator cars lined with Celotex. For Celotex keeps the temperature just what it ought to be... no matter what the weather is doing outside. Meats that travel with Celotex always arrive deliciously fresh and wholesome.
Backing up your Telephone—

To make your telephone and back it up with all the apparatus and supplies needed for your service is a work of infinite variety. Buying rubber from Singapore, mica from India, conduit from Ohio—Making each year a million telephones, 15,000 miles of cable, switchboards by the trainload—
From Microphone to Your Home

ON THIS page our artist pictures every step in radio broadcasting from the studio performance to your ear. Tons of complicated electrical broadcasting machinery work under full load in order to vibrate the diaphragm of your loudspeaker which, at most, weighs only a fraction of an ounce. However, when you consider that many millions of loudspeakers all over the country are operated in unison with yours, and that broadcasting would be virtually worthless if the highest standard of technical excellence were not maintained, the vast expenditure in time, money, and machinery is amply justified.
When SPRING-SLAP throws a party...

AUNT HESTER lets out a quick and exclamatory "Gracious!"â€”Jane voices a subdued but emphatic "Ouch!"â€”Bill winces as though someone had shot him. And you... well, outwardly you're apologetic, but inwardly you're as mad as a roughed-up hornet. And, we'll add, for a very good reason. We'll grant that rough roads and unexpected hummocks can weave a frown on the face of the most placid driver. We'll admit that those sudden jolts and jars are as racking on your car as they are on you. But do you know the cause of this commotion?
Trained to Get Their Man on the Run

Trained to Get Their Man on the Run. Members of the Berlin, Germany, police force are taught to shoot at running objects by pictures thrown on a screen by a movie projector that gives an illusion of life to the targets. Sharpshooters are required to make good scores at this practice work before they can […]
Let's Play a Tune

Every Nation Has Music All Its Own Dressed in the full uniform of the Scots Guards, these experts on the bagpipe are ready to play at memorial or any other special services. The Highlander still clings to his pipes, though there are those who find them slightly less than musical. There is no escaping the diligent ukulele player. Even in the heart of the Belgian Congo, the uke is strummed; that is, if this strange looking instrument can be called a uke. The player in the photograph is Congo's champion, and he loves to strum and sing his native African songs.
Household Aids

Inventions to Save You Time and Work Want only half a slice of toast? This tiny electric toaster is designed to give you exactly that. It uses only 150 watts and is adequate for the tea table or an individual breakfast. With a foot on the loop in the handle, this pail is held steady while dry or oiled mop is cleared of dust by turning against blades.
POSTMEN USED TO TEST TANNING PROCESS

One of the most unusual scientific laboratories in the world is a pair of shoes. When chemists of the United States Department of Agriculture, in Washington, D. C, recently wished to test the relative wearing qualities of shoe-sole leather produced by two different tanning methods, they sought the aid of postmen, who are proverbially-hard on their shoes.
The Patent Office Has Become A National Disgrace

By EDWIN W. TEALE THE Patent Office, in Washington, D. C, recently sent to a workman in a chemical factory in the Middle West a $100,000 piece of paper that wasn't worth a cent. It represented a patent on a machine he had invented two years before. Factory officials, at the time the application was made, estimated that the invention would be worth $100,000 to them as soon as a patent was obtained. The workman visioned himself on Easy Street. But he reckoned without delays at the Patent Office.
Amos 'n' Andy Explained

By A. A. BRILL, M.D. As told to Michel Mok DR. A. A. BRILL is known as the ablest man in his field in this country. He brought psychoanalysis to America and has written two widely read books on the subject. In this absorbing article, he brings all his vast knowledge and experience to bear in an effort to show you exactly why the Amos 'n' Andy craze is now sweeping the country. He goes to the very heart of the matter and makes clear the secret of their great popular appeal. I DISCOVERED, not long ago, a new phenomenon in American life. Literally millions of persons of all ages and stations are listening daily to Amos 'n' Andy, the "comic strip of the air." But they do more than that. They take an intense personal interest in the two characters, their ups and downs, their adventures. To thousands of men, women, and children Amos 'n' Andy are not fictitious figures. They are real, living human beings.
PIANO SIZE PIPE ORGAN FOR HOMES

Only its double keyboard, a row of stops above it, and an inconspicuous pipe at the rear reveal that the latest musical instrument for the home is an organ. In size and form it looks like a piano. But within the case are concealed 231 pipes that, it is claimed, equal in richness and variety of tone the effects produced by pipe organs of great size. The "baby" organ is designed especially for dwellings of moderate size. An average-sized living room offers adequate space for it.
Dogs Are Smart - How about Cats?

Your Pet May Be too Proud to Learnâ€”or Just Stupid. Science Is After the Truth By PRESCOTT LECKY Department of Psychology, Columbia University Are cats as smart as dogs? Judging from the experimental evidence so far secured, the answer is an emphatic "No." In many scientific tests the dog has proved his superior intelligence. And if the question were put to a popular vote, there is small doubt that the dog would score an overwhelming victory. But science is not yet ready to hand the dog the palm. The reason is that the cat possibly has not had a fair show. Because the dog is a gregarious, sociable animal that loves its master, is eager to please him, and is fond of praise, it is much easier for it to demonstrate its intelligence than it is for the cat. Solitary by nature and habit, indifferent to its master's attitude and praise, the cat is difficult to "draw out."
Why 2,000,000 Americans Are Dope Fiends

DR. WM. I. SIROVICH, a leading authority, tells here the amazing facts about the illegal dope traffic, which in recent years has assumed the proportions of a national peril. He is a member of Congress and a physician, and is leading the fight for an international agreement to stem the blighting tide of habit-forming narcotics that pours into this country from abroad. By JOHN E. LODGE IN THE United States, one out of every sixty persons is a drug addict. During the decade from 1920 to 1930, the number of narcotic victims in America has doubled, tripled, quadrupled. One ton a year of crude opium and its derivatives would meet the legitimate medicinal and scientific needs of the nation. Yet, last year, approximately 200 tons were smuggled into America. The amount of morphine consumed is thirty-five times that required; and, with a smaller population than that of Germany, France, and Italy combined, we import ten times as much crude opium as these three nations together.
How They Trailed a New Planet

Study of many photos of stars disclosed to a farm boy what may prove a new world where a famous astronomer said it would be. Old theories are upset by find. By ALDEN P. ARMAGNAC A NEW planet has been announced. Out in space, four billion miles beyond the globe we live on, a yellowish object, a little larger than the earth, swings in a vast circle about the sun; a frigid little world, bathed in the dim light of perpetual dusk. Its discovery is called the most important event in astronomy in nearly a hundred years. A new planet is not found every day. As many of us learned in school, a planet is one of the exclusive company of heavenly bodies that get their light and heat from the sun. They swing about it, as the earth does, in great circular paths, or orbits. These earthlike worlds are so few in number that they may be counted on the fingers.