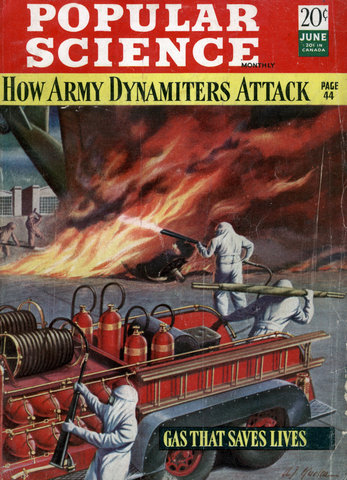 Jul, 1942
Rubber-Balloon Globe Puts the World in Your Pocket

Rubber-Balloon Globe Puts the World in Your Pocket CARRYING the world in your pocket is no task with this balloon globe designed to keep you abreast of world events. The rubber balloon can be inflated by three or four lungfuls to a diameter of eight inches. The neck is then twisted and passed through a […]
"Petrified Lightning" Is Formed by Catching Man-Made Bolts in Sand

By CATCHING bolts of artificial lightning in a pail of sand, Westinghouse engineers duplicate one of nature's rarest phenomena.
Pumping Gas

when a car gasoline tank is full, an automatic filling-station hose nozzle prevents tanks from overflowing and spilling gasoline over fenders to spot the finish and waste fuel and money. Inserted in the filler neck of a gas tank, the nozzle is opened by a hand valve as with ordinary nozzles. When the gas tank is full, gasoline starts to rise in the filler neck. As soon as it reaches the level of the tip of the filler spout, an automatic valve shuts off the flow. The device speeds up filling-station service.
Office Recorder Puts Three Hours of Talk on Ten-Inch Disk

Office Recorder Puts Three Hours of Talk on Ten-Inch Disk A new office recorder makes it possible to record three hours of conversation, dictation, and the like on a single ten-inch plastic disk. Paper-thin, the disk is curved on a special turntable while the machine is in use. Sound, picked up by a microphone or […]
Inventors Offer Thousands of Ideas to Help Beat the Axis

WAR inventions are flooding the National Inventors Council and the U. S. Patent Office. At the Council's headquarters in Washington, D. C, 45,000 suggestions have been received during the last year. And 3,000 of them have been adoptedâ€”one out of 15, an amazingly high proportion that pays tribute to American inventive ability. Results have well justified the effort of sorting valuable new ideas from equally well-meant schemes that prove unsuitable for various reasons.
Ronnie the Riveter

Rosie gets all the press, but very few people know about Ronnie the Riveter, the WWII icon of gay war-workers in the U.S. Where I work It’s Chesterfield Here’s the answer to that. . . Chesterfields are Milder, Cooler-Smoking and definitely Better-Tasting in just the way you want a good cigarette to be. And no […]
A CHAMPION GIVES YOU A LESSON WITH THE LARIAT

By TOM ROAN THE use of rope as a catcher goes back to the days when primitive man spread vine loops and crude grass ropes to snare animals for his food. But it took the American cowboy to become an artist with a rope. In long days in the saddle, drifting lazily with a trail herd, or hours alone during the night herding, the rope became his plaything. The comparatively simple routine of roping a horse, calf, or steer was not enough. He worked out new tricks. Step by step he progressed, until today the American cowboy is the wizard of the lariat. To bring the fundamentals of roping to our readers we found a champion in D. H. Frank Biron, now operating the Cowtown Guest Ranch near Ramsey, N. J. Biron is an all-around "cow hand"â€”bronco buster, trick rider, wild-steer bulldogger. As a trick-rider and trick-roper champion he has his picture in the cowboy halls of fame from coast to coast.
Portable Sound-Detector Units Made for Airplane Spotters

What could I possibly add to this? Portable Sound-Detector Units Made for Airplane Spotters A self-contained sound detector, easily carried and operated by one person, makes it possible for individual aircraft spotters to hear approaching aircraft through a set of earphones. When the low-pitched sound is picked up, the spotter slowly turns his body until […]