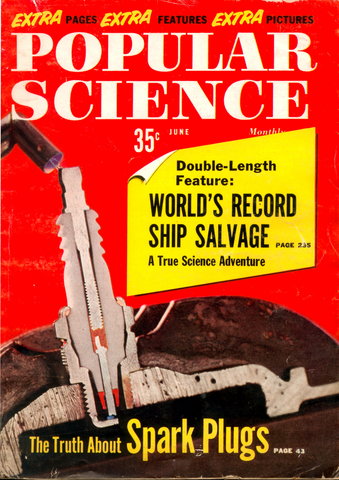 Telephones on wheels The mobile telephone center above has been put into service in Chicago. It is designed to assist reporters and officials at special events. The 32-foot bus carries 15 phones—two of them on the outside. It is also provided with 10 mobile radiotelephone channels, several hand-carried radio transmitters, and a powerful public-address system.
50-STAR AMERICAN FLAG

I know this ad is for a stamp, but it made me wonder about flag makers lobbying for an extra state. It would make a great attack ad for people arguing against a vote for Puerto Rico becoming a state. “Puerto Rican statehood, paid for by Big Flag”. 50-STAR AMERICAN FLAG The now OLD GLORY […]
Floating garage

Floating garage When the USS Essex moved its base from Mayport, Fla., to Quonset Point, R.I., officers and men who owned cars received permission to transport them on the carrier’s flight deck. One catchâ€”a warning: If war broke out while they were at sea, the cars would be dumped. The ship carried no planes, as […]
Scotch Tape

Origins of the matte Scotch Tape we all know and love. NON REFLECTIVE TAPE for permanent mending of torn blueprints, maps, books, and other papers is colorless and almost invisible. The Scotch brand tape is made of acetate film with a matte finish that you can write on with a pen or pencil. Unlike other […]
How I Got My Wife to Use a Seat Belt

The title of this article should be: “How Mr. Pavlov got his wife to buckle up: a lesson for the auto-industry.” How I Got My Wife to Use a Seat Belt FOR 10 years I have used safety belts in my car. But each time we went for a ride I have had to tell […]