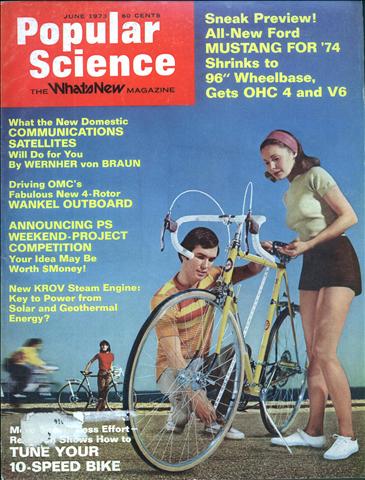 Fire fighter Mounted near the carburetor of an inboard or I/O engine, the Firemaster discharges one pound of liquefied fire-fighting gas automatically if the temperature reaches 230 degrees F. $14.95 with mounting bracket. John E. Martin Sales, Penllyn Pike, Spring House, Pa. 19477. Automatic plug Countless boats have sunk right at the dock because the drain plug was left out. Drain Check prevents this. When the water level rises above the drain, a check ball floats into position to keep the water from entering the drain tube. It's $8.45 from DePersia, Grand Haven, Mich. 49417.
Pushbutton calling / Memory phone

Pushbutton calling Tired of dialing calls? Here’s an add-on that converts an ordinary dial phone for pushbutton signaling. The 5-1/4-inch sphere also has a memory for 10 frequently used numbers you can call with two buttons. Busy number? Just wait and push one button to repeat your call. Made by Pye in England. Memory phone […]
For faster shopping: a Revolator

Cabs in this people-mover will whisk up and down on a continuous belt—something like a Ferris wheel. The Revolator is planned for a multilevel shopping center that's being built in Morristown, N.J. Each cab will hold 150 shoppers, so a six-unit system could transport 40,000 an hour—far more than elevators or escalators.
What the New Domestic COMMUNICATIONS SATELLITES Will Do for You

Canada's pioneering Aniks, and U.S. successors, are introducing the revolutionary innovation of overland telephone-and-TV relays in the sky. They promise bargain rates for long-distance phone calls, picture phones that everyone can afford—and better television programs, by way of novel kinds of TV networks By WERNHER von BRAUN PS Consulting Editor, Space On Jan. 11, 1973, Rudy Pudluk, community manager of Resolute on a Canadian island above the Arctic Circle, made a long-distance phone call to Ottawa. The English-speaking Eskimo chatted with Gerard Pelletier, Minister of Communications, and with David Golden, president of Telesat Canada, whose system carried his voice across the frozen North.
Computerized drafting

Ever dreamed of converting your rough sketches into fully proportioned finished drawings at the stroke of a pen? Well, someone did. IBM now has an experimental system that does just that—courtesy of a computer.
Camera helmet

Camera helmet Like some action in your movies? Mount your camera on the POV (Point-of-View) helmet professional stunt men use. While you’re skiing, cycling, or mountain climbing, a visor frame tells you what you’re shooting—hands free. $130. Gilbert-Waugh Productions, 3518 Cahuenga Blvd., W. Hollywood, Calif. 90068.