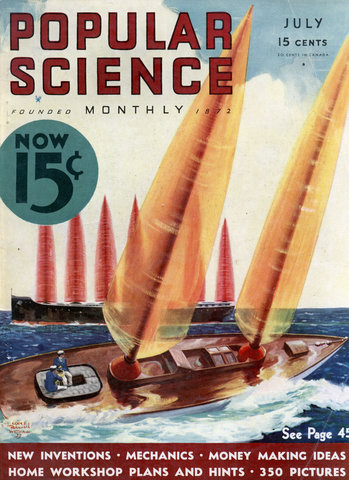 ROCKING-HORSE TRAINS BRITISH RIDERS Mounted on rocking-horses, recruits of the British cavalry are now receiving preliminary training in horsemanship. At the Army Equestrian School, at Weedon, England, the wooden horses were recently installed to give rookies the feel of the saddle and practice in mounting and dismounting before they tackle the spirited animals stabled at […]
ROBOT GUIDES SUBWAY RIDER IN LONDON

ROBOT GUIDES SUBWAY RIDER IN LONDON Twirling a dial helps subway riders find their way, at a self-service information booth just opened in London, England. To inquire how to reach any point in the city, the traveler sets the dial according to a printed list of instructions. The device then informs him of the place’s […]
COMPLETE RADIO SET PUT IN HEADPHONES

COMPLETE RADIO SET PUT IN HEADPHONES Inventive ingenuity has succeeded recently in building a complete radio set into a pair of headphones. No batteries’ are required, since the set uses a crystal detector, which is adjusted by manipulating a small knob on one of the receivers, as shown above. To tune in any station, the […]
New Devices FOR THE BUSY HOMEMAKER

NEW COCONUT SHREDDER. This new fruit juicer, which has a detachable reamer, can be quickly changed into a coconut shredder. It is easily demounted for cleaning INDIVIDUAL ASHTRAY. The tray, above, is of asbestos and is designed for individual use. When soiled it is thrown away. It can also be used as a coaster for glasses REST FOR FLATIRON Illustrated in circle is a new flatiron rest that is attached to ironing board so iron slides onto it without the necessity for lifting it. One advantage claimed is that it leaves the board clear for work
New Rotor Ship Sails in Lightest Wind

LOOKING like whirling surfboards, strange new rotors will furnish the power on a boat now nearing completion at Chicago. Laurence J. Lesh, pioneer aeronautical engineer, is designer of the craft. Unlike the Flettner rotor ship, which attracted wide attention a few years ago, his boat will depend entirely upon the wind for propulsion. No engines will be required to keep the rotors turning, as was the case with the high "chimneys" of the German craft. Once the pointed, vertical wings of the Lesh boat begin spinning, they keep on until the wind dies down or the brakes are applied. The lightest of breezes, tests have shown, will start them whirling and move the ship.
CALIFORNIA FISHERMEN WEAR DIVING HELMET

CALIFORNIA FISHERMEN WEAR DIVING HELMET Fishing in a diving suit is the latest sport innovation at Catalina Island, Calif. Equipped with a diving helmet, and weighted down with a lead belt and shoes of the same heavy metal, the submarine fisherman walks out from shore as shown below. His trailing air hose is attached to […]
WORLD'S FIRST Steam-Driven Airplane

Successful Flights with Long-Sought Craft Crown Many Similar Attempts by Early Aviation Engineers By H.J. FitzGerald OVER the Oakland, Calif., Airport, a few days ago, a silent plane slanted across the sky trailing a thin ribbon of white vapor. Spectators heard the pilot shout a greeting from the air. They saw him flash past, skimming the ground at a hundred miles an hour. They watched him bank into a turn, slide to a landing, and, with the propeller spinning backward, roll to a stop in less than a hundred feet. They had seen, for the first time in history, a man fly on wings powered by steam! Two brothers, George and William Besler, the former a geologist thirty-one years old, and the latter a mechanical engineer, two years younger, have achieved the dream of Maxim, Langley, and other pioneers of flight. Through their work, the steam-driven airplane, long talked about, long planned, has become a reality.
Loudspeakers Page Hospital Doctors

It’s hard to imagine a hospital without a P.A. system. Loudspeakers Page Hospital Doctors No time is lost in calling any particular physician in one of New York’s big hospitals, where a new paging system has just been installed. When a telephone call for a doctor is received at the central switchboard, it is referred […]
Full Orchestra on Empty Stage

Conductor, 150 Miles from Musicians, Controls Expression with Master Key ORCHESTRAL music such as never before had been publicly heard, poured from the apparently empty stage of Constitution Hall, Washington, D. C, a few nights ago when Dr. Leopold Stokowski, conductor of the Philadelphia Symphony Orchestra, demonstrated before the National Academy of Sciences, a new electrical system of musical reproduction and transmission developed by engineers of the Bell Telephone Laboratories.
Big Dam to Water Sahara

Ambitious seems to be a bit of an understatement. Big Dam to Water Sahara Turning the Sahara Desert into blossoming farm land, with water drained from the Mediterranean Sea, is the ambitious project for which, Hermann Sorgel, German engineer, seeks international support. He proposes to dam the Strait of Gibraltar, and then cut a canal […]
WONDERS OF ANT LIFE SEEN IN GLASS HOME

WONDERS OF ANT LIFE SEEN IN GLASS HOME Between two photographic plates, held in a wooden frame, a New Hampshire naturalist placed dirt and thus constructed an anthouse with transparent walls. By this means the activity of an insect city is easily studied. The tunnels and subterranean chambers made by the ants are clearly visible […]
DIME PUT IN SLOT RINGS DOORBELL

DIME PUT IN SLOT RINGS DOORBELL To save a busy housewife from frequent annoyance by unwelcome callers, a doorbell that works only upon the insertion of a dime is soon to be marketed. The coin slides into an inside receptacle, where it closes an electric contact that permits the bell to be rung. If the […]
TINY MICROPHONES HELP SINGER MAKE RECORD

TINY MICROPHONES HELP SINGER MAKE RECORD Miniature microphones, placed on a singer’s chest and forehead, as shown above, supplement standard equipment in making electrical transcriptions at a Los Angeles, Calif., studio. By this method, the originator says, it is possible to make a record that sounds even better than the voice of the performer in […]
POCKET STEREOSCOPE

This looks like an early Viewmaster. POCKET STEREOSCOPE SHOWS VIEWS ON FILM Gone is the old-fashioned parlor stereoscope of a generation ago, but its counterpart, in modern guise, has just made its appearance. The new pocket-sized form of the instrument, illustrated above, is as small as a pair of opera glasses and uses thirty-five-millimeter motion […]
WALKING CANE IS ALSO A FISH POLE

WALKING CANE IS ALSO A FISH POLE A cane that turns into a fish pole, as demonstrated above, permits a fisherman to try his luck whenever he encounters a promising stream. Telescopic fiber sections join to form a hollow shaft, through which the line is threaded from a detachable reel. The curved handle holds hooks, […]
Camel Ad: Live Dog From an Empty Kennel

This is part of a whole series of Camel ads all with the theme: “It’s fun to be fooled – It’s more fun to know”. Which I find pretty funny considering that Camel spent the next 80 years or so lying through their teeth.
Tricks of Firebugs EXPOSED BY POLICE EXPERTS

By Robert E. Martin ITS engine throttled down, a black touring car swung noiselessly into the driveway of an unoccupied house on Long Island, thirty miles from New York City. Two men hastily entered the building carrying bundles and cans. It was three o'clock in the morning. The owner was hundreds of miles away on his vacation. Twenty minutes later, neighbors tumbled from their beds at the sound of a terrific explosion. Through its shattered windows, they saw the vacant house lighted up by a plume of yellow flame flaring half across the basement from a broken gas pipe. Two dark figures were picking themselves up from the front yard outside one of the windows. They scrambled into the touring car, backed swiftly into the street, and raced away.
EAR TUBES FOR PHONE MAKE WORDS DISTINCT

I’m not sure it would be possible to design a worse set of earphones… EAR TUBES FOR PHONE MAKE WORDS DISTINCT Persons hard of hearing, who have difficulty in carrying on a telephone conversation, are said to be aided by the new set illustrated above. When answering a call, the user places a receiver of […]
Giant Explosions REPRODUCED IN MINIATURE by Home Chemists

How Blasts of Grain Dust or of Gasoline Vapor Are Caused in Your Laboratoryâ€”Tests With Which to Prove a Burning Candle Is a Gas Plant By RAYMOND B. WAILES HARMLESS, miniature explosions make experimenting with combustibles a thrilling, yet safe, amusement for the amateur chemist. With inexpensive homemade apparatus, he can duplicate the explosions in a gasoline motor and amuse his friends by burning air. When we say a substance burns, we imply that it combines with oxygen to produce heat and sometimes light. Hydrogen and carbon, as well as many other substances containing these two elements, display this property. A candle, for instance, is made of paraffin, a combination of carbon and hydrogen. When the wick is lighted, the paraffin melts and produces hydro-carbon gases, which decompose to form other inflammable gases and carbon.
BIG CROSSBOW HURLS MAN FIFTY FEET

BIG CROSSBOW HURLS MAN FIFTY FEET Somersaulting fifty feet through the air from a giant crossbow, a California daredevil recently introduced a new circus thrill. Billed as a human arrow, he takes his place in a small metal cradle and braces himself for the shock of starting. At a given signal, an assistant trips a […]
TURTLELIKE CAR BUILT OF OLD PARTS

TURTLELIKE CAR BUILT OF OLD PARTS From spare auto and motorcycle parts, a Chicago mechanic has built a freak vehicle which he calls a “turtle on wheels.” The total cost, he says, was about twenty-five dollars. Made of corrugated metal, the turtle-shell body extends beyond the wheels on each side, reducing wind resistance. On country […]
Tanklike Tractor Carries Welder to Repair Job

Tanklike Tractor Carries Welder to Repair Job Maneuverable as a war tank, an endless-tread tractor, just developed by Westinghouse engineers, carries a built-in welding outfit right to the point where it is needed for railway repairs. The fifteen-foot machine easily ambles across rails, runs along side slopes as steep as forty-five degrees without overturning, and […]
FIVE-BLADED RAZOR CUTS SHAVING TIME (Jul, 1933)

Looks like the Gillette Fusion isn’t really that new after all. Plus, this razor never, ever needs to be sharpened! The wouldn’t lie to me, right? FIVE-BLADED RAZOR CUTS SHAVING TIME Five blades, instead of one, are used in a new type of safety razor introduced by a French inventor. One stroke of the razor […]
History's Biggest Show

REVIEWS WORLD'S GREATEST CENTURY By Edwin Teale AFTER a forty-year journey through space, a reddish ray of starlight has just struck a photo-electric cell and flashed on the lights of a $25,000,000 extravaganza of science, the Century of Progress Exposition at Chicago. Islands to accommodate the show, were built in the waters of Lake Michigan. Grass and trees and towering buildings cover them and hundreds of thousands of glowing, gas-filled tubes illuminate the great exposition. Covering 338 acres, the thousands of exhibits compress into the scope of an exposition the drama and wonder of history's most amazing century of scientific advance. Under your eyes, crude rubber changes into auto tires; casein, extracted from milk, becomes a fountain pen; piles of parts turn into automobiles that speed away under their own power.