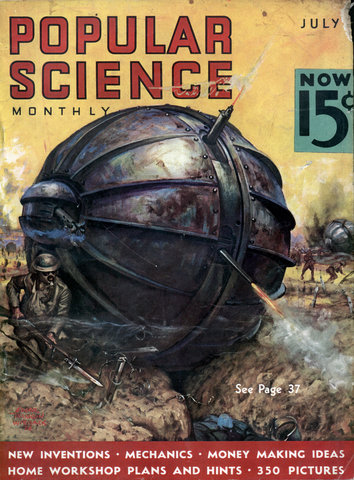 CORRUGATED PLATING DEFLECTS ARMOR-PIERCING BULLETS BY FURROWING the surface of metal plate with angular ridges, a Philadelphia inventor has materially increased the strength of armor designed for use on tanks, warships, and aircraft. In recent ballistic experiments conducted before ordnance experts, high-powered bullets fired from a distance of fifty yards pierced a test section of […]
TOURIST CAMP HAS CONCRETE "TEPEES"

TOURIST CAMP HAS CONCRETE “TEPEES” Cleverly constructed to look like a small Indian village, a novel tourist camp near Lawrence, Kans., has concrete shelters closely resembling Indian tepees. Cement stucco, laid over wire mesh on a foundation of three slantingpoles, forms the walls of the odd overnight cabins. Each “tepee” is equipped with comfortable beds, […]
ARCTIC CABINS HAVE WINDOWS HEWN FROM ICE

ARCTIC CABINS HAVE WINDOWS HEWN FROM ICE Log shelters constructed in northern Russia for Soviet fishermen have windows of ice instead of glass. Thick slabs, cut from clear ice, were hewn to shape, fitted into the window frames, and frozen in place. Constant sub-zero temperatures keep the ice windows frozen solid throughout the long winter […]
AIRPLANE DECK FOR LINER

AIRPLANE DECK FOR LINER Funnels disappear amidships and hinged masts swing downward to clear a spacious airplane-landing deck on a proposed 100.000-ton super-liner. The huge ship would be 1,250 feet long, with a cruising speed of thirty-four knots and a passenger capacity of 10,000. In war time the liner could transport 20,-000 troops and carry […]
ODD ROAD VEHICLE TEACHES TYROS TRICKS OF AIRPLANE CONTROL

ODD ROAD VEHICLE TEACHES TYROS TRICKS OF AIRPLANE CONTROL A curious road vehicle, guided by controls exactly like those of an airplane, has been devised by a French inventor to enable would-be pilots to learn some of the maneuvers of flight without leaving the ground. Wheels on outriggers simulate the action of ailerons on a […]
GROCERY STORES GET MUSIC IN "WIRED - RADIO" PROGRAMS

HOUSEWIVES in New York City are now buying their groceries to the strains of concert orchestras, as the result of a recently inaugurated "wired-radio" service being offered to hotels, restaurants, and shops. Special musical programs, reproduced from high-grade recordings in a central studio, are transmitted by direct telephone lines to loudspeakers installed in fifty stores of a large grocery chain.
Handy Aids for the HOMEMAKER

CUBE STARCH IS EASILY MEASURED Made in the form of cubes about the size of a lump of sugar, a new starch makes it easy to secure uniformity of stiffness in starching laundry. The starch is packed in one-pound boxes, each of which contains eighty cubes RACK FOR RAZOR HAS BLADE DRIER When a safety-razor blade is placed in the drying unit of this novel bathroom fixture, and the lid is pressed down, two built-in absorbent pads dry the blade instantly
BEACH SEAT ROLLS UP FOR CARRYING

BEACH SEAT ROLLS UP FOR CARRYING Weighing only thirty-nine ounces, a combined seat and back rest recently placed on the market rolls up compactly for carrying. The legless chair is made of thin wooden slats fastened together with wide strands of heavy khaki webbing that produce a flexible and yielding surface. Two canvas supports keep […]
WOULD ADD TO ALPHABET

And you thought switching to the metric system was hard… WOULD ADD TO ALPHABET An alphabet of forty-one letters would be an improvement over our present one of twenty-six, according to a Portland, Ore., educator. In the English language the letter “a” alone is pronounced eight different ways. He would add a new letter for […]
STRINGS GO 'ROUND ON NOVEL HARP

STRINGS GO ‘ROUND ON NOVEL HARP Unusual musical effects may be evoked from a “merry-go-round” harp created by three Seattle, Wash., musicians. By operating foot pedals like those of a bicycle, the performer rotates a five-foot vertical spindle carrying the strings, and plucks them as they go past. The odd mechanism provides enough strings to […]
LIFE PRESERVER FITS NECK

I’m sure that a panicked drowning person is going to be A-OK with someone tying a big life preserver around their neck. I know that when I’m afraid of suffocating the first thing I want to do is constrict my airflow. LIFE PRESERVER FITS NECK A LIFE PRESERVER of new design, carried on the back […]
BULL WITH SINGLE HORN IS MODERN UNICORN

This is kind of sad. It almost warrants it’s own unicorn chaser. BULL WITH SINGLE HORN IS MODERN UNICORN What might be called a modern unicorn has been produced by Dr. W. F. Dove, University of Maine biologist. From a day-old bull calf, Dr. Dove removed the two small knots of tissue which normally develop […]
Bell Ad: Good Neighbors

The Bell System serves the whole country, yet it remains close to the people. The people use it. Their savings built it. "It belongs to Main Street." The 270,000 employees of the Bell System live and work in your neighborhood and in similar neighborhoods in every section of the country. They are good neighbors. Thousands of times each day and night their activities bring friendly aid to those in need.
PURSE CONCEALS CAMERA FOR SECRET SNAPSHOTS

PURSE CONCEALS CAMERA FOR SECRET SNAPSHOTS Hidden within a bronze holder attached near the clasp of a woman’s purse, a tiny “candid camera” may be operated secretly to snap unposed photographs while the purse is held unobtrusively in the lap or against the body. For less furtive shots, the purse can be held at eye […]
NEW FEATS OF Chemical Wizards REMAKE THE WORLD WE LIVE IN

By ALDEN P. ARMAGNAC IMAGINE a ball of fiber, weighing only one pound, of so fine a texture that if unrolled it would reach from the Atlantic to the Pacific! This marvel of chemistry, exhibited when American chemists recently assembled at Kansas City, Mo., to compare their achievements, is the latest kind of rayon, or artificial silk. A garment made from it can be hidden in the palm of the hand. To produce it, laboratory workers have gone the silkworm one betterâ€”for it measures one third thinner than natural silk. Improvements in methods of purifying the wood pulp that serves as its raw material, and in the chemical solutions and machinery used in its manufacture, have combined to make its production possible.
Simple Experiment Shows How the Universe Was Formed

By Gaylord Johnson A TINY globule of machine oil, spinning around in a beaker of wood alcohol, will reenact for you one of the most stupendous dramas of the universeâ€”the formation of a giant spiral nebula. Photographs of these far-off galaxies of stars made through giant telescopes show that, in spite of minor physical differences, they all have one feature in common: the main structure consists of two curving arms spiraling out from opposite sides of a central mass. Obviously, this structure is the result of a whirling, centrifugal force. But why should there always be just two arms? That is what this simple demonstration will show you.
COATS COAT COAT STORE AS NOVEL SALES SCHEME

COATS COAT COAT STORE AS NOVEL SALES SCHEME OVERSTOCKED with a large supply of men’s spring and winter coats, a clothier in Copenhagen, Denmark, adopted a unique sales scheme. He erected a scaffolding around his store building and completely covered it from roof to sidewalk with more than a thousand overcoats. The novel display attracted […]
The Bicycle Comes Back

In amazing revival of fad of the nineties By John E. Lodge THE bicycle is back. Four million Americans now pedal along streets and highways. And, last year, factories in the United States turned out 750,000 machines, nearly equaling the peak production of the gay nineties. News items from all parts of the country tell the story of this dramatic boom in popularity. In Chicago, Ill., for instance, 165,000 persons recently signed a petition asking for cycling paths to be constructed in the city parks. In Washington, D. C, a huge crowd of enthusiastic spectators, last winter, braved frigid winds for hours to watch an amateur bike race. From coast to coast, cycling clubs are i springing up. The veteran League of American Wheelmen has come back to life. The Amateur Bicycle League of America has approximately ninety affiliated clubs; the Century Road Club, promoting amateur races, has twenty-five or thirty, and there are upwards of 300 unassociated clubs in the country.
Can Fish Hear? STRANGE TESTS GAUGE SENSES OF DUMB CREATURES

"DUMB" animals are learning to talk. Not by ord of mouth, but in roundabout ways they are telling scientists how they feel, what they see and hear, and even what they think about. Age-old mysteriesâ€”always the source of controversyâ€”are evaporating as research workers peer into the minds of inarticulate creatures. Only recently have experimenters succeeded in hurdling what has long been an insurmountable obstacleâ€” the fact that animals, unlike human laboratory subjects, cannot give verbal reports of their experiences and emotions. Through ingenious artifices that establish, in effect, a common language between the animals and their investigators, their innermost sensations are now being revealed.
Early Appearence of a Filter Tip Cigarette

CIGARETTE HAS FILTER IN TIP A new cigarette has a novel filter tip made of rolled, pleated paper. Besides protecting the smoker’s lips from the annoyance of loose tobacco ends, the rolled-in filter is said to provide a cooler smoke.
Weird Schemes To Make It RAIN ... but they never work

By Robert E. Martin CHILLING the winds with giant refrigerating coils! Bombarding storm clouds with long-range siege guns! Churning the air with airplane propellers! These are but a few of the hundreds of strange and curious schemes that have been devised to wheedle rain from an unwilling sky. Each year brings its crop of weird plans to combat drought and produce rain when and where it is needed. Some are based on scientific fact, many have never passed the "paper" stage, and others are the fantastic ideas of professional "weather makers," who even today are able to find credulous customers to pay them for their services.
Novel War Tank Resembles a Rolling Ball

ROLLING over the ground like a giant ball, a high-speed "tumbleweed tank" proposed by a Texas inventor is a new addition to modern war machines. A spherical hollow steel driving cab is inclosed by a rotating outer shell consisting of two cup-shaped halves fitted with circular traction cleats.