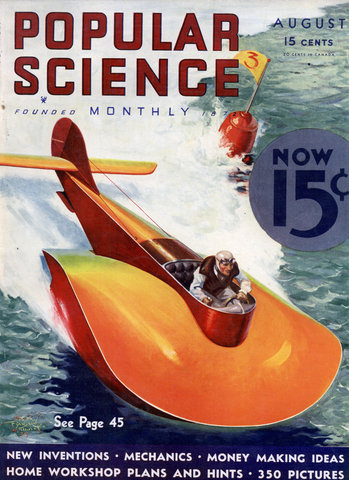 MAGNETS TOSS VOICE BACK LIKE AN ECHO When a World’s Fair visitor speaks into the device shown above, an electric echo throws back his words after a pre-set interval up to several minutes. One set of magnets impresses the voice on a moving steel tape, and a second set picks it up. The effect sounds […]
NEW GOGGLES HAVE TRANSPARENT SIDES

NEW GOGGLES HAVE TRANSPARENT SIDES A new style of goggles with transparent cups enables the wearer to look sideways as well as forward, removing the feeling of wearing blinders and the temptation to risk eye injury by leaving the goggles off. The unbreakable cups are large enough to be used over spectacles, as illustrated, avoiding […]
HIDDEN LIGHTS ILLUMINE MUSICAL INSTRUMENTS

HIDDEN LIGHTS ILLUMINE MUSICAL INSTRUMENTS Musical instruments glowing in the dark with diffused light have been introduced to provide a novelty for theatergoers. As the musicians play, the moving light on their instruments offers a striking spectacle. This is enhanced by changing colors in the illumination, which is controlled from apparatus offstage. The photograph above […]
Who-o-o-o-o

YES, who? . . . When the shapes and shadows of night hide a million mysteries. . . . When strange, spine-chilling noises freeze us with fright. . . . Who doesn't wish for the comforting companionship of a strong, bright light? You'll he sure your flashlight will work when you want itâ€”if it's loaded with Eveready Flashlight Batteries! They last longer and stay brighter, because they're entirely encased in metal. Even the tops are metal!
VIOLIN HOOKED TO RADIO SET

VIOLIN HOOKED TO RADIO SET Stringed instruments without sounding boards, including violins, cellos, guitars, and ukuleles, have been devised by an eastern violin maker. Vibrations of the strings pass through the bridge to a magnetic pickup, resembling a microphone, that converts them into electric currents. These are amplified to operate a loudspeaker. At home the […]
PRACTICAL AND MYSTIFYING HOME TESTS YOU CAN MAKE WITH IRON

By Raymond B. Wailes MYSTIFYING and spectacular 'effects give a keen interest to home experiments with iron and its compounds. The amateur chemist can make paint, produce molten iron from a simple mixture, and perform many other stunts that show why iron is man's most useful metal. Iron betrays its presence everywhere. Our blood gets its red color from the iron it contains. Soils, clays, bricks, and stones are colored by the iron in the earth's crust. A handful of ordinary nails or tacks will serve as the starting point for the home chemist's experiments. From them he can produce several interesting iron compounds.
STOVEPIPE PANTS SAVE FISHERMEN FROM SNAKES

STOVEPIPE PANTS SAVE FISHERMEN FROM SNAKES So richly stocked with fish is the Deschutes River, in central Oregon, that sportsmen facetiously say one must hide behind a tree to bait a hook. Unhappily, the region also abounds in rattlesnakes. To invade this angler’s paradise in safety, fishermen have adopted the ingenious expedient of donning tin […]
TALKING DUMMIES ADVERTISE GOODS

TALKING DUMMIES ADVERTISE GOODS Talking dummies, with human voices that draw a crowd’s attention, have been devised for advertising purposes by a Brooklyn, N. Y., technician. The voice is supplied by a loudspeaker, connected to a hidden microphone or a phonograph pick-up. Some of the dummies represent persons prominent in public and industrial life. Thus […]
Electric Eye Guides Ghostly Hands at a Thousand Jobs

By Robert E. Martin IN AN Eastern factory, the other day, a score of men crowded around a giant press. The machine towered twenty-five feet in the air. It weighed as much as four locomotives and its massive jaws crunched steel plates as though they were made of paper. As the group watched, the operator moved his hand a few inches. It crossed the deadline into the danger zone of the crushing jaws. Instantly, as though a spell had been cast upon it, the mechanical monster stopped, upper jaw poised in midair. The operator removed his hand. The machine went on.
TWO-OUNCE CAMERA TAKES EIGHT PHOTOS

That’s actually very impressive. I wonder how well it worked. TWO-OUNCE CAMERA TAKES EIGHT PHOTOS A pygmy camera, hardly larger than a golf ball, has been put upon the market in New York City. It weighs less than two ounces, and carries sufficient sixteen-millimeter film, the size used in amateur moving picture cameras, to take […]
A Wind-Driven Battery Charger

By L. G. HEIMPEL Professor of Agricultural Engineering, Macdonald College, Quebec, Canada ANY thousands of farm folk are still dependent upon battery sets for their radio programs. To them the charging of storage batteries is still the greatest bugbear of the battery set. This homemade wind-driven charger is an economical solution of their problem; indeed, it is designed to take care of not only the battery of a single set but the batteries of a whole neighborhood. The farm boy who makes one of these in a community not served by high-line power can earn the cost of the plant and extra spending money in a short time.
MONSTER BLOCKS FOR PLAYHOUSES

MONSTER BLOCKS FOR PLAYHOUSES Youngsters may construct real playhouses and full-size, serviceable pieces of furniture with a set of giant building blocks introduced by a California toy manufacturer. Made of wood, the blocks include cubes and flat rails in a variety of sizes. A clever dovetail interlocking system makes it possible to assemble them securely […]
Novel Appliances for the Household

Novel Appliances for the Household KEEPS FOOD WARM. When dinner is delayed, food is kept warm in the utensil shown here. The center compartment, filled with hot water, heats the contents of the outer sections LOVE SEAT ALSO A BED By pressure on a lever, this love seat is easily turned into a comfortable bed […]
Observatory Built of Junk

Great Earthquake Registered on Homemade Instrumentâ€”Horsehairs Make Hygrometer WHEN slippage along an old fault sent violent earth tremors through southern California recently, it wrote a detailed story upon homemade instruments in an amateur scientist's laboratory near the center of the disturbance. Upon the black drum of a home-constructed seismograph, it swung a needle, giving its builder, Martin G. Murray, a record of the disaster. Ever since last December, Murray had noticed an increase in the number of tremors. Fom December 16 to 26, his instrument registered fourteen shocks. In March came the quake that left hundreds of buildings in ruins.
Strange Scenes from Life Caught with X-Ray Camera

X-ray photography, widely used in medicine and industry, is familiar to almost everyone in its ordinary applications. Recently a German physician has busied himself making X-rays of everyday scenes. Pictures on this page show the result of his hobby. Above, the hand of a sculptress modelling the clay figure of a llama. Note that the wire framework on which figure is built up is seen as white lines
World's First Drive-in Movie Theater

Movie Theater Lets Cars Drive Right In First of its kind in the world, an open-air movie theater exclusively for motorists has just been opened at Camden, N. J. Patrons drive in and park their cars in semicircular rows. Then, without leaving the vehicles, they enjoy talkies projected on a sixty-foot screen. Occupants of a […]
CAT PICTURES USED TO SCARE AWAY BIRDS

CAT PICTURES USED TO SCARE AWAY BIRDS If live cats will scare birds away, why not use imitation cats as scarecrows? Acting on this unconventional idea, a farmer of Warwickshire, England, is decorating his property with painted likenesses of cats like those illustrated above. Stoppers from mineral water bottles supplied the eyes. Now it remains […]
INSTRUMENTS PUT ON AUTOS HOOD

INSTRUMENTS PUT ON AUTOS HOOD So he can read the dials of his car’s instruments without taking his eyes from the road, a Binghampton, N. Y., engineer has redesigned his car and placed them on the hood. A streamline housing for the meters gives the car a distinctive appearance. At night the dials are illuminated […]
130 DENTAL DRILLS BUZZ IN ONE ROOM

I think that for many people this would be their idea of hell. 130 DENTAL DRILLS BUZZ IN ONE ROOM If the sound of a dentist’s drill gives you a slightly weak sensation, imagine a hundred and thirty of them going at once! This is the number of dental chairs, complete with every modern piece […]
Flying Police Outwit Crooks of the Air

HURLED into the pounding surf, a thousand yards from shore, seven members of the crew of the navy blimp, J-3, were righting for their lives. It was the morning after the loss of the U. S. Navy dirigible Akron. This second tragedy had occurred as the blimp returned to Beach Haven, N. J., after an unsuccessful search for survivors. A forty-five-mile an hour gale had caught the lighter-than-air craft, driven it out to sea, and sent it crashing into the water with ripped bag and disabled engine. Spectators crowded the shore. They knew the men would be smothered by the gale-lashed waters long before a boat could reach them. Suddenly, overhead there was the high whine of an aerial motor. A silver-winged amphibian was scudding under the low, black clouds, heading for the wreck. It swooped, landed like a seagull on the tossing ridges of water, and the two occupants began dragging the floundering men to safety within the craft's cockpit.