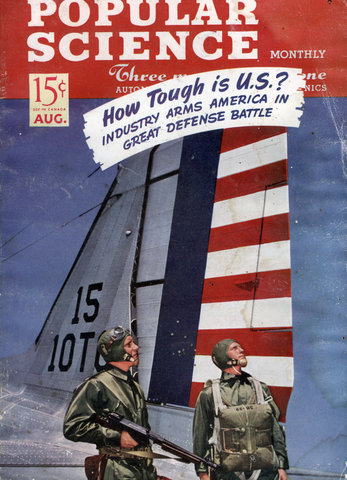 THIS WASHING MACHINE has a heavy-duty wringer, the drain flume of which automatically shifts when the rolls are reversed. If the roller pressure is released, it can be instantly reset.
Invisible Rays in Blackout Plant Make Dials Glow

GHOST LIGHTS shine in German power plants during air raids, but there is no stray gleam from the plant windows. To accomplish this, vital gauges, levers, switches, control wheels, stairs, ladders, and walkways within the plants are painted with chemicals which glow only when illuminated with the invisible rays from special lamps.
Battle of the Billions

American Industry Mobilizes Machines, Materials, and Men for a Job as Big as Digging 40 Panama Canals in One Year By RAY MILLHOLLAND IT LOOKS like some outsider is continually forgetting that we Americans are a nation born with the smell of machine oil in our hair and that if we are crowded too hard we are liable to stop making electric refrigerators and pretty automobiles and devote all our attention to turning out the darnedest flock of airplanes, tanks, and battleships the world has ever seen.
From Cook Stoves to Tanks . . . They Roll from the Automobile Factories

By SCHUYLER VAN DUYNE THE Detroit genius for industrial organization is sorting out the sudden chaotic avalanche of defense orders with its customary frantic and incredible orderliness. It is responding to the fabulous impetus of something like a billion and a half in armament orders assigned by the U. S. Government to the automobile industry. The vast industrial center, already a huge magnet, drawing raw materials and manufactured parts selectively from many parts of the country, is being called upon suddenly for all its reserve power. Its standard products, such as automobiles, trucks, and their accessories, were in extraordinary de-mand, but now there are imperative pleas also for airplane, marine, and tank engines; for the airplanes and the tanks themselves and for antiaircraft guns, cook stoves, ammunition components, refrigerators, Diesel engines, and a conglomeration of other articles.
Dictaphones Save Time of Stock Checkers Taking Inventory

Dictaphones Save Time of Stock Checkers Taking Inventory By assigning five men equipped with dictaphones to the job of inventorying its 350-odd grocery stores regularly, the Safeway Stores on the West Coast has given its store personnel 12 extra nights off a year. A checker from the central office covers two stores a night, speaking […]
Army's Nerve System

Interesting article about all of the communications demands (radio, telegraph, crypto, etc) of an army division during WWII. Army’s Nerve System SPEEDS TEAMWORK OF FAST-MOVING FIGHTING MACHINES By HICKMAN POWELL THE heavy tanks and dive bombers hit the line, smash an opening. Through the gap rush the armored divisions, the light and medium tanks and […]