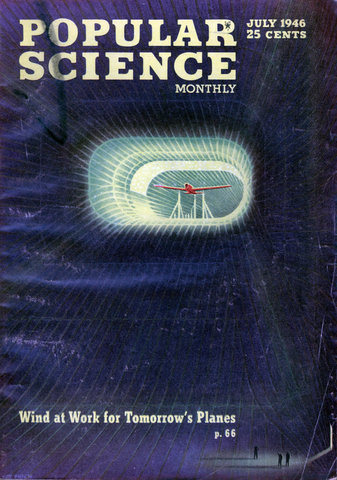 Ours seems sturdy, but bursting stars reveal illness of others. By DONALD H. MENZEL Professor of Astrophysics, Harvard University AN EXPLODING star is not news. Dozens of stars blow up each year, increasing: their brilliance 10,000 times or more. Most of them, however, are extremely faint before the outburst, and even at peak brightness are not visible to the naked eye. Really bright objects are rare. But when a star bursts twice in a century-that is astronomical news! It gives us significant scientific information about such stars.
MARKET GOES TO HOUSEWIFE.

MARKET GOES TO HOUSEWIFE. This modern version of the old-time huckster who hawked his farm produce from door to door has been put in operation by Morton Salter in Los Angeles residential streets. The traveling grocery store is a converted bus with all the fittings of a busy, modern market, and follows a regular route.
More Doctors smoke Camels THAN ANY OTHER CIGARETTE

Everybody knows him... Early or late, he's a familiar figure to every policeman on the street â€”he's the Doctorâ€”he's on an emergency call! A Doctor's life isn't his own to live as he chooses. There are interrupted holidays and vacations and nights of broken sleep. Emergencies require his presence for long, exacting hours . . . with somewhere a pause and perhaps the pleasure of a cigarette. Then back to his job of serving the lives of others.
Fifty Chances a Day to save a life!

By LEON SHLOSS EVERY day in July and August an average of 50 persons will drown in the United States. Between May 1 and September 1, no other type of accident will take a greater toll of life, except possibly automobile mishaps, which caused more than 28,000 deaths in 1945 (See PSM, Apr. '46). The grim race between the two destroyers will be close. Drownings rank fourth in the annual accident rate, being outstripped by automobiles, falls, and burns, but between May Day and Labor Day they are the prime contender for Public Accident Enemy Number One. This year, a tremendous pilgrimage from the cities to water resorts is expected. Approximately 100,000,000 people will go swimming. Nearly 200,000 will be rescued from drowning. About 10,000 will drown!
Rubber-Band Sharpshooter

How a North Carolina Sportsman Makes and Shoots His Slingshots ONE OF boyhood's traditional toys has come of age. Jim Gasque, North Carolina sportsman, has proved that the ordinary slingshot, when properly made and used, can be an adult weapon of deadly accuracy at distances up to 30'â€”a range sufficient for stalking small game. He shoots regular No. 0 buckshot.
Wheel Weaves Colors Together for Television

COLOR television for which the Columbia Broadcasting: System has gone to bat began last winter with transmission of movies; direct transmission of street scenes by means of a live color television camera is promised this summer. Actually, persons gathered around a Columbia ultra-high-frequency television receiver are seeing an extremely rapid series of one-color picturesâ€”first red, then blue, then green. The pictures are seen through a rapidly revolving color filter, which is mounted in front of the set's viewing tube, and the persistence of vision within the watcher's eyes causes the images to appear in their natural colors.
Americans Roll Their Own

THIS HYBRID suggests what can happen when aircraft parts are employed in making an automobile. Jack Norvell of Los Angeles used an increased gear ratio, a long chassis, and dual radiators, one on each side just forward of the rear wheels. Note the excellent visibility afforded the driver. In preliminary tests Norvell reached a speed of 131 m.p.h, with a Chrysler engine. FEATHERWEIGHT is the word for the little car at the right. It weighs 500 lb., just about one fifth as much as the standard jeep. Emery Kent, of Wichita Falls, Texas, the builder, made many of the parts by hand. He tells of getting 50 miles to the gallon, and 50 m.p.h, top speed.
Magnesium the BANTAMWEIGHT METAL

How Chemists Have Put It to Work as a Jack-of-All-Trades. By KENNETH M. SWEZEY DURING the war magnesium was extensively used as a lightweight structural metal for aircraft parts and as pyrotechnic material for star shells, signal flares, tracer bullets, and flash and incendiary bombs. Strong, silvery white, and only two thirds as heavy as aluminum, it is the lightest of all construction metals. In the form of powder, thin sheets, or wire, it burns with a dazzling flame that water or even carbon dioxide will not put out. Never found alone in nature, magnesium is made on a tremendous scale by the electrolysis of its compounds. These compounds are among the most plentiful substances in the crust of the earth. Whole mountain ranges consist of dolomite, a double carbonate of magnesium and calcium. Asbestos, talc, and meerschaum are magnesium silicates. Epsom salts, named after the springs at Epsom, England, where they were first isolated in 1695, are magnesium sulphate. In the form of its chloride, there are nearly 6,000,000 tons of magnesium in every cubic mile of-the sea, a vast storehouse of supply.
Eary I.R. Imager

New bolometer that "sees" warmth miles away will help fight disease, warn of fire, catch burglars, and spot heat leaks. By MARTIN MANN SCIENCE has outdone the cat with a new device that can really see in the dark. The superconducting bolometer, developed at Johns Hopkins University's Cryogeny (refrigeration) Laboratory by Dr. Donald H. Andrews and three student associates, will spot a truck moving in complete darkness five miles awayâ€”and instantly trace its outline on a screen. Actually an ultrasensitive heat-measuring instrument, the bolometer detects heat radiating from men, vehicles, and buildings. Unlike the Army's sniperscope (PSM, June '46, p. 73), which reveals a night-hidden object by sending out a beam of infra-red rays and showing on a screen the reflections from the object, the bolometer does not emit rays. Like early television cameras, the bolometer employs a mechanically oscillated mirror to scan the area under observation. Instead of a cell sensitive to visible light, however, it has a tiny strip of alloy that responds to the invisible light of the infra-red spectrumâ€”heat rays. This alloyâ€”the rare metal, columbium, alloyed with nitrogen-converts the varying heat radiation it receives from the mirror into electrical impulses, which are amplified and fed into a cathode-ray tube. Movement of the cathode beam is synchronized with the oscillating mirror, while the intensity of the ray is governed by the impulses from the alloy strip â€”thus the object being observed appears on the fluorescent screen of the tube just as in a television receiver.
Smoke In Bed?

DON'Tâ€”Unless you use the sensationally new 6 in 1 CIG-SMOKER. Designed scientifically for SAFE-CLEAN-FILTERED cigarette smoking. SEE the cig BURN inside this miracle. Durable silverglas creation. It combines a Holder-Filter-Fire Shield-Ash Guard-Smoke Cooler and Automatic Snuffer. PREVENTS- fires, burns, ash mess, accidents and irritating harmful smoking. It's wind proof. Vew thrills in smoking-nothing else like it.
Some JAP SWORDS are Good

GIs brought back many kinds; here's how to tell the best By DAN OTA IN PREWAR Japan a foreigner found it easier to purchase a rare gem than a genuine antique Nippon-to, traditional two-handed sword. For the past 40 years, especially, it had symbolized intense Japanese nationalism. Today thousands of these swords have been brought to the United States by veterans from the Pacific. But only a few of the new owners know that their souvenirs were once bought and sold for prices up to $10,000 apiece.