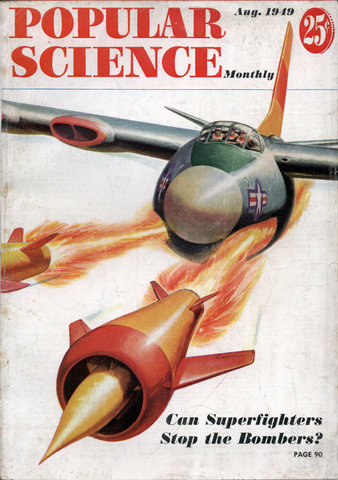 Sep, 1949
Can Superfighters Stop the Bombers?

By Herbert Yahraes Drawings by Ray Pioch Are the huge new bombers invincible? Have they made fighters obsolete? Or will big, new "fighter-bombers" be the answer to air defense? Popular Science assigned a tough-minded reporter, with 110 previous military experience, connections, or prejudices, to interview the experts—military, civilian, and scientific. Here is his evaluation of the hottest argument in the history of air power.
Weird Anti-Racism PSA

The farmer looked at his untilled acre. "Nope," he said, "Won't stick a plow in there. Don't care if it is fertileâ€”I just don't like the color of the soil." So the weeds grew rank and spread their seeds to his other acres, fouling his cotton and stunting his corn. And his harvest was poor. There are some who would do the same for America. They would neglect the cultivation of the minds of young growing Americans. They would set them apart, deny them equal advantages ...
New TV Sets Project Pictures

New TV Sets Project Pictures A PACKAGED projection unit made by North American Philips Co. is being incorporated in current models by more than a dozen manufacturers of home television receivers. Some of these new models will throw the video picture on a screen outside the unit, just like home movies. Main components of the […]
Home Made TV Station

California amateur sends voice and picture over transmitter made from $500 worth of war-surplus parts. By Andrew R. Boone PULSING through the California skies from a weather-beaten back-yard shack, the image of a beautiful brunette flows into television receivers around San Francisco Bay. The boys who have seen her call the vision Gwendolyn. Reproduced by a collection of secondhand tubes and war-surplus video equipment, Gwendolyn represents the first standard TV image broadcast successfully and repeatedly by an amateur. Soon, from the same station, W6JDI-TV, radio ham Clarence Wolfe, Jr. hopes to televise live images.
Machine Speeds Pretzel Bending

THERE are more crunchy pretzels to munch when you sip long, cold drinks this summer, thanks to a new automatic pretzel-twisting machine that rolls and ties them at the rate of 50 a minuteâ€”more than twice as fast as skilled hand twisters can make them. Developed by the American Machine & Foundry Co., of New York City, the pretzel . bender is helping to meet the increased demand of pretzel lovers, who eat millions of pounds each year. On this and the following page is the story of how pretzels march from raw dough to baked twist.