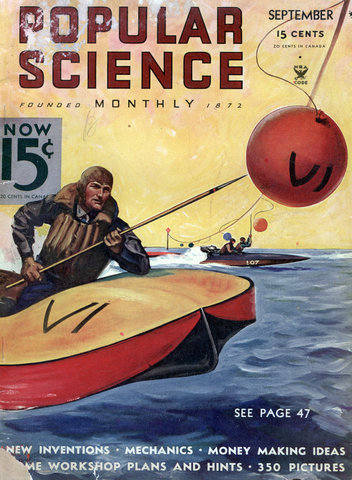 CELLOPHANE MASKS SAVE DOCTORS FROM GERMS Cellophane masks for doctors and nurses are a recent innovation at a Los Angeles, Calif., hospital. Worn before the face, the transparent shields are designed to lessen the chance of contagion in treating patients with communicable diseases, without obstructing the wearer’s view or otherwise inconveniencing him. The masks may […]
NEW ELEVATOR WORKS WITHOUT CABLES

Elevators travel under their own, self-contained power in a system upon which a New York inventor has just received a patent. Each car is suspended from a hollow drum containing a driving motor. Under control of the operator, the drum revolves and climbs a vertical series of rollers by means of a worm on its exterior, as shown in the diagrams.
Surgeons Stretch Crippled Legs

Amazing new operation severs bones and then lengthens them gradually until a short limb attains normal proportions so limp vanishes MEN AND WOMEN, who once limped painfully through life because infantile paralysis or other disease had left them with a shrunken leg, now walk and work and play with all the ease and grace of normal, healthy human beings. A miracle of modern surgery has achieved for them the amazing feat of actually restoring the length of the deformed leg.
REMOTE CONTROL LOCKS CASH DRAWER

Seems like this would be easy to defeat by simply saying to the teller: “If you press that button I’m going to shoot you in the head.” REMOTE CONTROL LOCKS CASH DRAWER Designed to be proof against holdups, a remote-control cash drawer has been introduced. When a bandit appears, the storekeeper has only to press […]
MERRY-GO-ROUND DRIVEN BY HAND

MERRY-GO-ROUND DRIVEN BY HAND Children provide their own power to take an exciting spin on a merry-go-round produced by a Dallas, Texas, inventor. Occupying seats at the ends of a long board, the two children push hand levers back and forth. Wires leading from these handles actuate a ratchet wheel which causes the board to […]
Spearing Balloons Is New Boat-Race Hazard

Spearing Balloons Is New Boat-Race Hazard Balloon “busting” from careering speedboats is the spectacular sport recently devised by a racing association in California. Before the start of a race, a cable is stretched above the starting line of the course about ten feet above the water. Large toy balloons are suspended from the cable by […]
ICEBOX ON WRIST TO COOL THE WHOLE BODY

This is not as ridiculous as it looks. Go read this awesome article Noah Shachtman wrote for Wired a few months ago about “the glove”. Then tell me where I can get one. ICEBOX ON WRIST TO COOL THE WHOLE BODY Purdue University physicists say the whole body may be kept cool during the hottest […]
RAISING GOLDFISH BY THE MILLION

IF YOU own a goldfish, the chances are two to one it came from Martinsville. This southern Indiana town is the goldfish center of the world. Seventy-five million fish have begun life in the 600 ponds of its famous Grassyfork Fisheries. When I spent a week, not long ago, watching the work of caring for these miles of goldfish, 10,000.000 baby fish had just rolled from their round white eggs and were darting about ponds and hatchery tanks. For the older fish, men were cooking mush breakfasts in giant 7,000-pound boilers. Other employees were busy shooting weed-killing chemicals into ponds; stalking watersnakes, musk-rats, fish hawks; sorting, counting, packing goldfish and sending them racing across country in a giant truck that resembles a submarine and can carry 200,000 fish in a single load.
New Marvels of Food Factories

PERMITTED to peep behind the scenes in a giant food plant, a housewife would envy the speed and exactness of the modern machines used in preparing and packing food. The variety of these error-proof automatic devices is almost endless. In bakeries, massive, yet delicately adjusted mixers weigh and sift flour and measure water, mixing enough dough for hundreds of loaves of bread in one batch and assuring uniform taste and texture. The baked loaves are brought into position before a rank of dancing hack-sawlike blades that slice them in a flash, more nearly even than the most skilful housewife could do. Huge disks, rotating under corrugated rollers, knead spaghetti dough to a uniform consistency.
DIVING HELMETS WORN AS SWIMMERS LEARN STROKES

DIVING HELMETS WORN AS SWIMMERS LEARN STROKES Diving helmets are worn by pupils taking swimming lessons from a San Francisco, Calif., instructor who employs a radical new method of instruction. Wearing these helmets, the beginners frequently remain under water for long periods during which they study the swimming movements of the instructor and later attempt […]
NEW CAR LOCK THWARTS THIEF

At least until the invention of the Bic Pen. NEW CAR LOCK THWARTS THIEF Using a cylindrical key, a recently marketed auto-bile lock for doors or ignition is said to afford protection against thieves. A thief attempting to open the lock would have to pick each of its seven plungers separately. Drilling or shearing off […]
HUMANLIKE SKELETONS POSE FOR ARTISTS

HUMANLIKE SKELETONS POSE FOR ARTISTS To aid students of art and medicine in studying the postures of the human body, a young German sculptor has devised skeleton puppets that can be adjusted to anypose. The figures are made of aluminum, and action of their joints is patterned after that found in the human body. Like […]
Radio Beam Guides Girls in Blindfold Race

Radio Beam Guides Girls in Blindfold Race Five blindfolded co-eds at the University of Cincinnati recently competed in an odd foot race, guided only by the beams from a radio beacon set up on the campus. Each girl taking part in this unusual contest carried a small receiving set and wore earphones through which the […]
BATHERS COAST DOWN DUNES

BATHERS COAST DOWN DUNES Coasting on sand dunes is the latest diversion to capture the fancy of thrill seekers at the seashore. The only equipment needed is a huge frying pan of the type used in hotel kitchens. The coaster carries this pan to the top of a hard-packed dune and gets in. A good […]
NEW LEG SHACKLE HOLDS RUNAWAY PRISONERS

NEW LEG SHACKLE HOLDS RUNAWAY PRISONERS A new leg shackle that automatically disables a prisoner who tries to run is being tested by the U. S, Division of Investigation. Invented by a seventy-three-year-old Louisiana farmer, it consists of two hinged steel rods, bound to the thigh and lower leg by padded chains. As a prisoner […]
Would You join a Mob?

by Prescott Lecky AT THE University of Iowa, a student recently hurst into a psychology classroom. Dramatically he gave details of a local kidnaping and cold-blooded murder. The criminal had been caught, had confessed, and a mob was forming near the county jail to lynch him. How many would go along and help the lynchers? At the height of the excitement, 200 students answered the following questions: How many would participate with the mob? How many would go along as spectators? How many would stay away?
ROBOT PLOWS WHILE FARMER RESTS

ROBOT PLOWS WHILE FARMER RESTS While its owner sits comfortably on his porch, a new farm tractor operated by radio control plows his field for him. Radio impulses governing the tractor’s movements are supplied by an automatic radio transmitter, and are picked up by an antenna on the tractor. A receiving set starts the tractor’s […]
Eleven-year-old Boy is Lion Tamer

AN ELEVEN-YEAR-OLD Texas boy is making good at a job so dangerous that only the hardiest men attempt it. He is a lion tamer, probably the youngest in the world. Armed with a cracking whip, a light chair, and blank cartridge pistol, he strides fearlessly into a cage crowded with ten young lions and, at a sharp command, makes them roll barrels across the floor, frolic on a see-saw and roar lustily in mock rage.
NOVEL FLAG FORMED OF COLOR-PRODUCING GERMS

NOVEL FLAG FORMED OF COLOR-PRODUCING GERMS Colonies of bacteria provided the colors for a living American flag grown in Montclair, N. J., by a bacteriologist. The germs were made to perform their remarkable trick by tracing the outline of the flag on a shallow glass dish, with needles previously dipped in germ cultures. The dish […]
Pole Vaulting Peasants

This looks like something out of Monty Python. PEASANTS USE VAULTING POLES TO GET TO WORK Vaulting with poles is a necessary part of the every-day life of Friesian peasants in northern Germany. There the low, marshy fields abound with drainage ditches. These are so numerous that the construction of foot bridges would be prohibitively […]
First Spiral Notebook

USE COIL SPRING TO BIND NEW MEMORANDUM BOOK Coil springs form flexible bindings for a new type of memorandum books. One edge of the covers and pages of the book are perforated with more than twenty holes and the coil spring is threaded through these holes to make a permanent binding, as shown above.