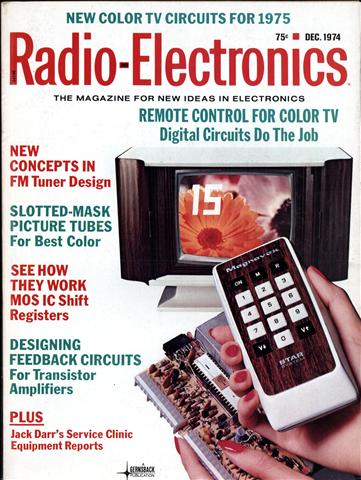 Next Issue:
This is the latest issue we have of this publication.
New & Timely - Cheap Music, Gernsback and Microprocessor Patent

Low-priced music for the masses supplied by "anti-profit" shop. Because they "didn't want to see a society without music," four Washington women have opened what they call "an anti-profit enterprise" to sell phonograph records at phenomenally low prices, reports the Washington Post/Potomac. Named "Bread and Roses" after a line in an old worker's song, the new establishment markets records of African music, blues, folk and rock at about a 9 per cent markup.
Jerrold's New Universal TV Remote Control

The Hottest New Product Since The Calculator... * Makes every set on your floor a remote control model. * Universal— Attaches to any set in minutes. * Changes channel instantly and fine tunes. * Turns set on/off.