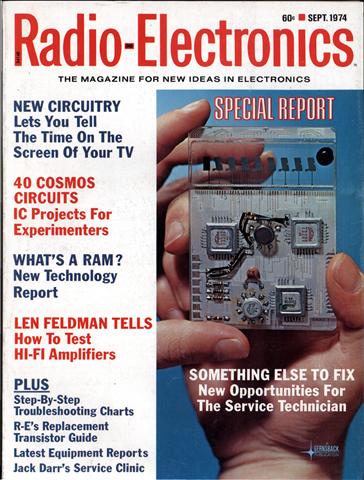 When you buy RCA tubes from your participating RCA tube distributor, he delivers the goods the easy way. No muss, no fuss, no constant cutting of carton flaps, no torn cartons on your shelf or in your caddy. Just give your tube order to your RCA distributor and get your premium the free and easy way. The bigger your tube order, the more valuable your gift. So visit him soon and select your Free and Easy RCA award with your purchase of RCA tubes. (The values are really extra special.)
TOMORROW'S PRODUCTS are in kit-form today-with Heathkit electronics

At ELEMENTARY ELECTRONICS they said: "The fact is, today's Heathkit GR-2000 is the color TV the rest of the industry will be making tomorrow .. . there is no Other TV available at any price which incorporates what Heath has built into their latest color TV." The FAMILY HANDYMAN reviewer put it this way: "The picture quality of the GR-2000 is flawless, natural tints, excellent definition, and pictures are steady as a rock. It's better than any this writer has ever seen."
SUBBER - TV Service Instruments for signal circuit analyzing.

TV Service Instruments for signal circuit analyzing. When Castle introduced the TV Tuner SUBBER analyzing instrument a couple of years ago it became the first practical way to easily test the VHF tuner, UHF tuner and i.f. amplifier system of any TV receiver. Being lightweight, self contained and battery powered the TV Tuner SUBBER *Mk. IV is the first such instrument which may be carried on service calls and used with ANY color or black and white TV receiver ... at $45.95 for the battery powered Mk. IV, or $54.95 for the a.c. plus battery powered Mk. IV-A the instruments have been known to pay for themselves in TIMESAVING in the first two weeks of use!
What's a RAM?

The vocabulary of engineers or experimenters working with computers, synthesizers, electronic calculators and similar digital devices is replete with acronyms you should know. RAM is one, read on to find out what it is and how it's used. by DON LANCASTER ANY MEMORY IS A STORAGE DEVICE THAT is given some information at some time and hopefully will return that identical information at a later date for reuse at least once. The most elemental unit of a memory storage system is the cell which can store one bit consisting of a "1-0" or "Yes-No" simple decision. Memory cells are often grouped into words of several bits each. These words can represent the number in a calculator, an instruction command in a computer, a tone and its duration in an electronic music composer, an alphanumeric character in a TV Typewriter and so on.
It's a mod, mod, modular world.

If you're handy with a set of tools, you may already have some of the skills you'll need to build Bell & Howell's color TV ... the TV with digital features! This program is the perfect way to discover the exciting field of digital electronics ... and best of all, you can do it all at home, in your spare time. Get free information now about this first-of-a-kind learn-at-home program prepared for you by skilled instructors at Bell & Howell Schools.