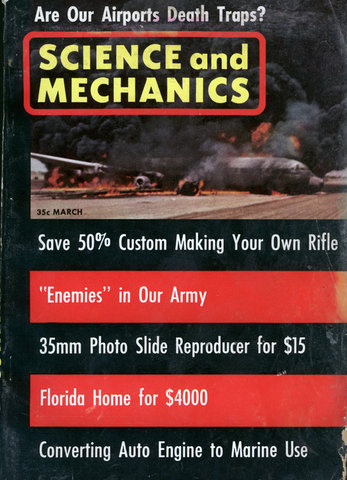 The first massive attack on the United States came at dawn. A Panama-based invasion fleet steamed up the Pacific coast to rendezvous with bombers from the Caribbean. Just off California they met; 12,000 foreign soldiers stormed the beaches while 7500 paratroopers plummeted from the sky. For the first time in more than a century, enemy troops trod U.S. soil. Our fighting men were ready; the enemy, bloody with massive defeat, withdrew to bases in the West Indies. But the war wasn't over.
The Sea-Gem: a 100mph Air-Cushion Ship by 1963

By JAMES JOSEPH NON-ELECTION year 1963 may nevertheless bring a spectacular inauguration. Some time next year, America's first air-cushion ship, the Sea-GEM (for sea-going ground effect machine) may streak New York to London on her maiden "flight." Riding 3 to 6 ft. above the waves on a frictionless cushion of air, the giant 100-ton craft will be propelled at better than 100 mph by four jet-prop pusher-type engines. Part ship, part plane, and wholly revolutionary, the Sea-GEM promises its 100 first-flight passengers some surprises.
"Jungle" Is a Breadboard

“Jungle” Is a Breadboard THE electronic jungle in the foreground is the breadboard, or first working model, of the new miniature four-binary module held by a Bulova Research and Development Labs engineer at Woodside, N.Y. All the elements of resistance and capacitance to the prototype jungle are contained in the tiny device to be used […]
Jumpin' Jiminy.. Check This Jumpin' Water

THE illuminated fountain that will be one attraction of the soon-to-open Seattle World's Fair is a combination of design and science that makes most other fountains look like amateur night at the waterworks.
Blast a Home in the Moon?

THE latest in a series of proposals for your lunar living facilitiesâ€”in case you decide to make the tripâ€”suggests construction could begin even before you land. A projectile from Earth would carry special shaped charges to blast a shaft (Fig. 2A) in the Moon's surface. At a predetermined depth it would blow a spherical chamber (2B).
Do-It-Yourself Sports Car

Do-It-Yourself Sports Car THE Lotus Elite, fiber glass and polyester resin British sports car, is available in kit form for under $3500 to British buyers. Assembled by the manufacturer, the Standard Elite costs $3750. But the kit buyers also save on taxes which run the standard model to $5600. The luxury Elite, with a 1216-cc […]
Super-Gun for Modern Crime Fighters

By PATRICK K. SNOOK SHADES of Al Capone. Even the bootleg king's old town of Cicero, Ill., finally has hung up its tommy guns. The Cicero police force has replaced its prohibition era "choppers'' with space-age Colt Armalite AR-15 light machine rifles. Throughout the country, matter of fact, America's 300,000 lawmen are taking a long look at their outdated arsenals. No wonder. With the AR-15 holding the spotlight of the show, Colt representatives are putting on special police demonstrations that really show what this new gun can do. I recently participated in one of them. Bill Murphy represented the Colt Co., and a group of top gunnery instructors from the Chicago police department were on hand.
Amazing Tear Gas Pencil