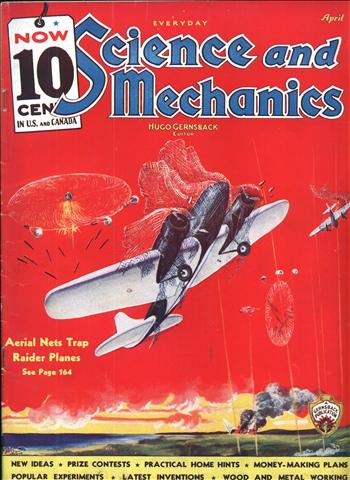 Aug, 1936
New Car Steers at Both Front and Rear

New Car Steers at Both Front and Rear THE new European car illustrated above, and shown in diagram at the left, is quite trim in its lines, and incorporates an interesting departure. The motor is at the rear, behind the wheels it drives; while the steering wheels are at the two ends of the machine, […]
SCIENCE NEWS of the MONTH

Interstellar Traveler Visits New England • WHEN a bright meteor shoots across the sky, astronomers appreciate a report from any observer who is able to describe its apparent path. One such report is useless; but several permit calculations of the true motion. One meteor, which went across Connecticut last October, was travelling 100 miles a second; it was therefore from outside our system, since the highest velocity to be obtained from the sun's attraction is less than 30 miles a second at the orbit of the earth.
Newest Devices for the General Use

Novel Electric Lighter is Noiseless • IT seems rather magical when this lighter is touched to the metal ring surrounding the receptacle for the rod and, immediately, a flame springs up. The secret is the small battery of dry cells concealed in the bases, which close a circuit through the insulated ring, on the receptacle, and the heating coil whose glow ignites the lighting fluid.
New Electron Tube "Sees" the Invisible

AN artificial eye, which extends the range of human vision into the dark areas of "ultra-violet" and "infra-red," is now available for scientific use, and will undoubtedly be turned to many purposes of everyday life in the next few years. It has been possible, for years, to take photographs by the aid of radiation which is invisible to the eye, and to develop them in a few minutes.
A National Monument to Ice Cream

A National Monument THE annual consumption of ice cream, America’s favorite dish, is now 180,000,000 gallons, says the Department of Agriculture. We have pictured this amount at the right; the can that would hold it would tower above Liberty’s head. It would be indeed a national monument to prosperity, of which ice cream consumption is […]
Star Smaller Than the Earth

AFTER centuries in which they thought the Sun a very small body (one early scientist was banished for estimating it to be a hundred miles across) men reconciled themselves to the fact that it is more than a million times the size of the Earth. And the further shocking fact became apparent, that there are stars a million times larger (in volume) than the Sun. It is therefore somewhat reassuring to our pride that a star has been found, by Dr. Kuiper of Harvard, which he calculates to be smaller than
Toothbrush-Spoon

This school of design is still very much alive today. It has just moved to China. Toothbrush-Spoon THE lure of combinations brought about this one at the right.
Hand Typewriter

Hand Typewriter AN Austrian inventor has made this machine, in which types on his gloved hands take the place of the usual writing mechanism.
Fun With Matches

ON dreary evenings, much amusement may be had by manipulating match sticks, splitting them with a piece of razor blade or a sharp knife, or combining several sticks and gluing them together. The addition of little pieces of paper, colored and pasted to the match sticks, will aid in carrying out the desired effect.
If an American Had Invented the Thermometer

If an American Had Invented the Thermometer FAHRENHEIT, the scientist who invented the scale of temperatures we use, took the greatest cold he could find as zero. But if an American had made the thermometer with the lowest reading in the United States as zero, it would be 66 degrees below Fahrenheit’s (66° below zero […]
Amateur Chemist's Robot

Amateur Chemist’s Robot Hyman Cordon, chemical student, of Boston, with a “man” he built out of rubber, glass, and other scraps. It eats food and digests it in human fashion, having heart, intestines, lungs, bladder, etc. It was exhibited at a recent “science fair.” (Int. News)
World's Greatest Radio Listening Post

RADIO fans take pride in the number of stations they can "log" and verify, especially if these are at a great distance. Contests for the most successful listening are as popular, now that one may hear Australia or South America, as they were in the days when people sat up in the hope of hearing Pittsburgh or Schenectady. However, the prize for the world's most systematic listening should go to Mdlle. Marianne (the personification of the French Republic, as Uncle Sam is that of the United States). She has erected the world's most elaborate receiving station for the purpose of listening to and recording broadcasts, as illustrated here.
Auto Made from Beans

Versatile Plant Furnishes Chop Suey Sauce and Plastic Moulded Parts for Cars PLASTICS — chemical compounds which, are compressed under heat into desired shapes, and thereafter are not subject to corrosion—are increasingly in use. Some are made of coal-tar products, some of milk; and one, which Henry Ford is now employing extensively, utilizes the Chinese soy bean. This useful plant, is, next to rice, the staff of life in the Celestial republic; like beans, peas, and other "legume" plants, it contains the proteins, or nitrogen compounds, for which we eat meat. Its oil, also, has found many uses; and those who have eaten the great American national dish, chop suey, are familiar with the dark soy sauce which accompanies it. The mechanical uses of the soy bean (which does not resemble American beans) are of more recent discovery.
Protects Against "Athlete's Foot"

Protects Against “Athlete’s Foot” THE reader of ads knows (if not by experience) that ringworm, or fungous disease of the feet, is readily communicated where great numbers bathe. The apparatus illustrated is specially designed to spray between the toes, under pressure, an antiseptic solution, such as chloride of lime, to prevent catching this annoyance.
Air Bubbles to Save Life at Sea

FOR more than two thousand years, sailors have known that a little oil, poured on the raging billows, will quiet them almost magically. In many rescues from a distressed ship during a storm, we read that oil has been used. A method, more efficient than simply pouring it over the ship's side, is to put the oil into cloth bags, through which it will leak gradually, and tow them at the end of ropes, so that the oil is distributed very thinly. It is necessary only to have a thin film, to break the "surface tension" of the water; and the waves are no longer able to hold their height so readily.