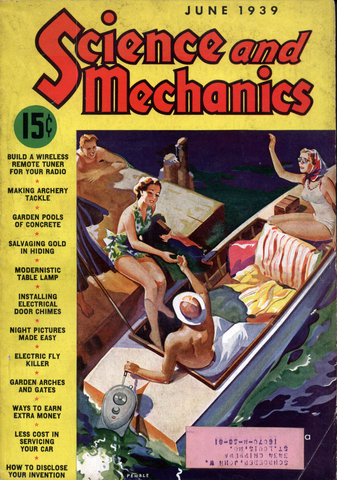 Ever since transparent plastics were introduced in this country the question keeps popping up — Will plastics soon take the place of glass? Some say, No! Others say, Yes! Frankly, I don't believe anybody knows the answer but it may be interesting to take a look at just what is going on in this direction and from the meager facts you can draw your own conclusions.
Television Set in New York Picks Up London Programs

Television Set in New York Picks Up London Programs TELEVISION programs broadcast from Alexandra Palace, London, and from Rome, Italy, have been seen many times this year in the mirror of a special cathode ray television receiver located in Riverhead, Long Island (just outside of New York City). Since television signals of this nature can […]
The Miracle of ICE from HEAT

Ingenious application of simple principle of physics turns the flame of a gas jet into ice cubes in the non-mechanical refrigerator. By ROBERT JOHN BAYER TO THE average man there is nothing mysterious in mechanical refrigeration. He knows that gases and vapors lose heat in expansion and that by a repeated cycle of compressions and expansions, confined gases can be cooled to an extent where they will operate as refrigerants. He knows that, in his domestic mechanical refrigerator, there is a motor and a pump which compress the refrigerant and that its repeated expansion in the coils in his box produces the cold that freezes his ice cubes and preserves his foodstuffs.