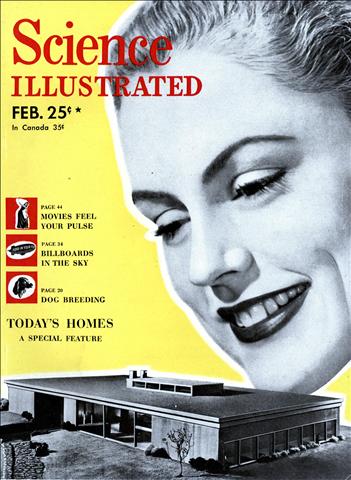 How much do you know about the planes you fly in, and how they are guided from city to city? What do you know about weather, and how your pilot copes with it? Here are answers to some of the questions that occur to almost every air traveler. They were compiled by Eastern Air Lines, which found that passengers have a lively interest in all kinds of flight operations. EAL collected questions and answered them in a booklet, which explains many expressions the layman either hears or sees in print.
KAISER'S "CHASSIS" HOMES

They're assembled from factory-built units, but they don't look alike What Henry J. Kaiser is already doing to meet the housing shortage in the Los Angeles area he regards as a sample of what he will be doing shortly near Detroit, Portland (Oregon), and other of our cities. Teamed up with Fritz B. Burns, veteran Los Angeles land developer, Kaiser is completing 1,700 homes near the California city, and before the year is over he expects to put up 10,000 more, there and elsewhere.
IT'S A LONG CLIMB

This is the tallest fire-department aerial ladder made in America. It's 100 feet to the top, but so rigid is the slender steel cantilever structure that there is little noticeable sway and no nip. Hydraulic jacks on each side of the new-style truck brace it against the pavement and supply a broader base. Hydraulic pressure puts the ladder up and takes it down.
ARMCHAIR PILOTS

They fly babes with beeper boxes They're not really armchair pilots, because they never fly from armchairs; they're more likely to be in jeeps, or in "mother" planes. But the name does fit after a fashion, for these boys are nowhere near the planes they are flying. They are the Army Air Forces' radio pilots. Wiggling levers on little five-pound boxes, they control huge four-motored giants that may be 50 miles away behind a cloudbank.
WHAT'S NEW

FOR SMOKERS. A new pipe has an adjustable air valve; Gentle Mfg. Co., 2222 Myrtle Ave., Detroit 8. Pipe cleaners are packed in a continuous roll; NuPak Pipe Cleaner Co., 11908 Ventura Blvd., North Hollywood, Calif. ALUMINUM SASH will soon be available to builders. These lightweight windows are easy to open and close—and can even be removed and taken to the bathtub or the kitchen sink for washing. DRY SHAVER shears off beard bristles as perforated drum rolls across face. In the short time it has been on the market, Vestpok has won many friends. Made by Ward Machine Co., 966 Main St., Brockton, Mass.
SCIENCE GALLERY

Fitting Music To Film Synchronizing music with action in a moving picture is one of the most exacting and exasperating jobs in the world. It's turning Hollywood's composers into precision engineers. When a composer writes a symphony for a film, his job has just begun. The music still must be fitted with split-second timing. Curiously, the chief tools for this are two prosaic little items: a stop watch and a tape measure.
SCIENCE ON WINGS

By JOHN FOSTER, JR. PROPHETS OF WING LOAD Not long ago, a well-known engineer declared flatly that it would be impossible to get airplanes above a 40-pound wing loading. By that he meant we could never get off the ground if the weight of the airplane and its load exceeded 40 pounds for every square foot of wing area. Actually that figure was topped some time ago, but conservatives then said we'd never get above 80 pounds.
SCIENCE HAS NO NATIONALITY

German and Austrian scientists will soon be serving American schools, labs, and business At Wright field, Ohio, 30-year-old Fritz Doblhoff test-flies his jet-propelled helicopter for the Army Air Forces. Not so long ago he was dodging American bombs at Wiener-Neustadt. At White Sands, New Mexico, Wernher von Braun, Dr. Ernest Steinhoff, and Dr. Martin Schilling take a leading part in getting the giant V-2 rockets off into the air. Up to May, 1945, these three scientists were working in Germany on long-range, transatlantic missiles.
Chauncey Guy Suits

Scientist with an insatiable yen for hobbies WHEN appointed vice-president of General Electric Company and, therewith, director of one of the very top research laboratories of the world, Chauncey Guy Suits was only 39. Scientific research is, to be sure, a "young man's game," but administering a staff of 550 men and women scientists is another matter—to say nothing of planning a new $8,000,000 research laboratory for a staff of 800.
PRE-TESTING MOVIES

ARI tells producers in advance whether you will like a new picture By HAROLD WOLFF Is there a scientific method of forecasting audience reaction to a motion picture before release? "Yes," says Dr. Frank Gallup, father of the election polls—and cites an impressive record of success for his Audience Research Inc. Certain victims of adverse conclusions say, "No. Gallup polls don't mean a thing. They lift a manhole cover and ask a question, and right away anybody inside the manhole becomes a critic."
VISUALIZING SOUND

Easy tests explain effects that most of us take for granted Sound is always in the air around us, though sometimes our ears cannot sense it. Often its behavior is puzzling. A train whistle, for instance, seems to rise in pitch as the train approaches, then drop as it speeds away from us.
Armored Camera Survives V-2 Flight, Photographs Earth at 65-Mile Height

A motion-picture record of the 65-mile flight of a V-2 rocket launched in New Mexico, was produced by a standard American-made DeVry 35-mm camera. The camera was mounted in the midsection of the V-2 and aimed at an angle of 16-1/2 degrees to the axis of the rocket.
SCIENCE ON SAFARI

Helicopter, diving eye, and wire recorders will ferret out secrets of African jungles Jules Verne was years ahead of his time in foreseeing the value of science to the world of exploration, but the plans for Commander Attilio Gatti's eleventh expedition to still-darkest Africa would have made even Verne's prophetic eyes pop.
PHOTOMETRIC LABORATORY

A reflector on an electric lamp controls light in much the same way that the nozzle on your garden hose controls water. One type scatters light like a fine spray; another throws a high-intensity beam like a stream of water. To help illuminating engineers find out exactly how any reflector performs, the Benjamin Electric Manufacturing Company built this scientific darkroom in Des Plaines, Ill.
BLOOD FACTORY

New plant converts human blood into variety of lifesaving products Given two pints of human blood, science now produces enough products to (1) cure two children of measles, (2) rescue five infants from the anguish of whooping cough, (3) save the life of a hemophiliac "bleeder," (4) help a victim of anemia, (5) aid a surgeon in performing a delicate brain operation, and also (6) enable him to make a skin graft without resort to scarring stitches.
WHAT I WANT NEXT

SI readers come up with a few tough assignments for the scientists and inventors RUFFLE IRONER. If some nice man of science would invent a ruffle ironer, I would gladly mention him in my will. You've no idea how much help it would be for ironing curtains, aprons, and dresses. It might be made as an attachment to an ordinary iron, or it could be a special little plug-in gadget. Either would suit me, but if it is hard to operate, I'll cut the inventor off without a cent!
EDISON INVENTED THESE, TOO

EDISON INVENTED THESE, TOO In his “spare time” the master turned out some strange contraptions On the occasion of Thomas A. Edison’s 100th birthday anniversary, Science Illustrated has delved among his 1,097 patents, comes up with some “sleepers.” .Between the epic discoveries leading to modern lighting, talkies, and phonograph, he found time to master-mind an […]
MAIL-ORDER SCIENCE

Even atom-bomb experts buy stuff from Ward's There is no connection between Montgomery Ward and Ward's Natural Science Establishment at Rochester, N.Y. —except that they're both in the mail-order business in the biggest sort of way. The science museum with the fine, old-fashioned name operates in a big converted Rochester winery. As a mu- seum it's unique because every one of its exhibits has a price tag; they're all for sale. Ward's "establishment" is to the world's scientists what Montgomery Ward and Sears, Roebuck are to the nation's households.
WHAT WE HAVE IN COMMON WITH DOGS

Scientists study canine behavior to see if it will explain our own Why are some dogs, like some humans, more active than others . . . brighter or duller . . . more dignified . . . more playful? Why, like humans, do they behave differently in groups: getting along well together or fighting . . . blindly following a leader ... or keeping to themselves?
WATCH THESE ATOM-BUSTERS

The new synchrotrons open up prospects packed with thrills. Anything that you see around you is made of matter. All matter is simply concentrated energy; when it is exploded, as in the blast of an atomic bomb, part of it becomes released energy. That was reasoned out by Einstein years ago; and the venerable scientist's reasoning certainly has been borne out by the achievements of the nuclear physicists who produced the atomic bomb.
SPECTACULARS

The Southerner who made good by making New Yorkers look up expects the whole postwar world to go sign-happy in the Times Square manner The sky's no limit to Douglas Leigh, today's Lamplighter of Broadway and King of the Spectaculars, those illuminated, animated supersigns that are catching on across the country.
THE AIRLINES MUST COME DOWN TO EARTH

There's something wrong with aviation. Suddenly, after making an amazing war record, the airlines have found themselves deluged with criticism. Air travelers, weary of delays and irritated by uncertain arrivals of planes, have begun to object. And their objections have been frequently and vociferously expressed. To date, the airlines have not been able to do much to help themselves. Keeping passengers sitting in airplanes for an hour, or two, or more, waiting to take off, has not made friends for the lines; nor has the business of "stacking" planes for long periods above congested terminals.
Bearings Move Todays World

BIG AND LITTLE of precision-made steel balls that smooth the path of modern industry and transportation. The big sphere, six inches in diameter, will go into a mammoth hot-oil valve in a refinery.
Homes That Glow in the Dark

Modern lighting adopts fluorescence to achieve harmony of illumination with architectural design and decor Lighting for the modern home can be beautiful as well I as scientifically correct. Fluorescent lighting makes all this possible now; and gone forever are the days when fluorescent fixtures caused kitchen, bathroom, or living room to look like a hospital.
SUPER Supermarket

Painless marketing has arrived for the housewives of Ridge wood, N. J., where the Grand Union store is trying out a spectacular new self-service gadget called Food-O-Mat. In simplest terms, Food-O-Mat works on the principle of the familiar paper-cup dispenser: take out one item, and another slides or rolls down an inclined metal ramp to take its place.
HOW'S YOUR "AROUSAL"?

Now the psychograph shows your reaction to the advertisements A successful advertisement is one with immediate emotional impact. Ad men have long sought a scientific means to gauge that impact before releasing a million-dollar campaign.