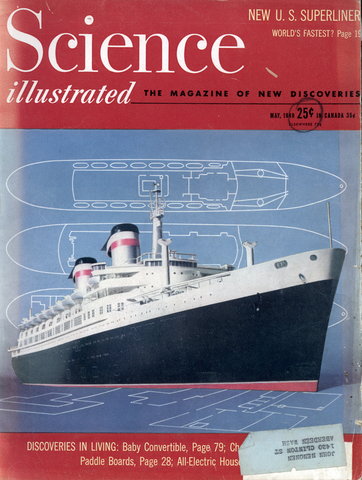 Next Issue:
This is the latest issue we have of this publication.
Why construction gets better all the time

Where roads were once built a shovelful at a time ... today mammoth earth-movers handle a ton of earth at a time. Mobile cranes swing 20 tons at the flick of a switch. Giant crushers grind 150 tons of rock an hour. Traveling concrete mixers place entire batches as they go.
The Mystery of the Shrinking Oranges

A Sad Story from Southern California by John Devaney California's Valencia oranges are shrinking. The Golden State's summer orange, which provides the entire nation with orange juice from July to November, has become little larger than a golf ball. And nobody in California knows why.
New Wiring Idea May Make the All-Electric House Come True

Spread out in the photographs above are symbols of what electrical engineers see as a revolution in home wiring. They show what can, in an ideally wired house, be done with a new type of electrical control. It's called remote control, or relay switching. The young housewife is showing how, from a single bedside panel with remote control switches, she can turn on the percolator in the kitchen, turn radios on or off, light up a flood lamp in the yard for a late-homecoming husband.
Chicago Man Stakes Claim to Outer Space

SCIENCE ILLUSTRATED PHOTOGRAPHS BY RUS ARNOLD Early this year, 74 envelopes, each addressed to "The Honorable Secretary of State" of 74 different nations were dumped into a Chicago mailbox. Within the envelopes was the announcement that a new nation had been formed and was asking lor recognition. The intruder into world politics was a thing called Nation of Celestial Space, the brainchild and property of a Chicago publicity man and "industrial designer," James T. Mangan. The idea of a nation encompassing all of outer space smote Mangan late last year when he and Ernest Eckland, his partner, were idly talking about "stuff." Eckland pointed out the window and remarked that there was "plenty of stuff out there."
Voyage of the Cullen Bros. Elevator

You don’t see that every day. Voyage of the Cullen Bros, elevator IN Wimbledon, N. D., the Woodworth Elevator Co. needed a new elevator, but building costs were high. In Hamar, 65 miles north across wheatlands, the old Cullen Bros, elevator was for sale. It made the 65-mile trip on timbers and wheels. Dakota’s roads […]
Swinging Tanning Lamp

Ahh the Waco Aircraft Company, long known for it’s fine tanning products. Roving arm with ultraviolet bulb paints sun lovers full-length, a side at a time AT least one of the rigors of artificial sun-tanning is eliminated by a new sun lamp with a moving bulb: You don’t have to keep moving either the lamp […]