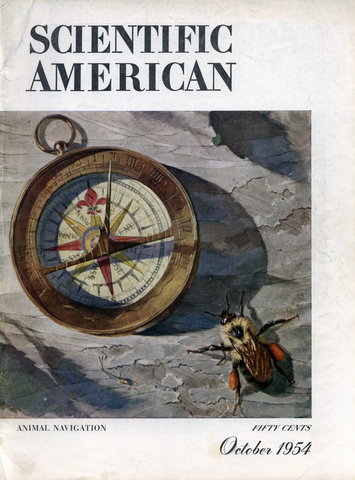 To make the most of their revolutionary invention, the transistor, Bell Laboratories scientists needed ultra-pure germanium. The scientists solved their problem by devising a radically new refining process. The germanium it yields may well be the purest commercially produced material on earth.
Very Early Article about the Structure of DNA

An account of the investigations which have Led to the formulation of an understandable structure for DNA. The chemical reactions of this material within the nucleus govern the process of reproduction by F. H. C. Crick Viewed under a microscope, the process of mitosis, by which one cell divides and becomes two, is one of the most fascinating spectacles in the whole of biology. No one who watches the event unfold in speeded-up motion pictures can fail to be excited and awed. As a demonstration of the powers of dynamic organization possessed by living matter, the act of division is impressive enough, but even more stirring is the appearance of two identical sets of chromosomes where only one existed before. Here lies biology's greatest challenge: How are these fundamental bodies duplicated? Unhappily the copying process is beyond the resolving power of microscopes, but much is being learned about it in other ways. One approach is the study of the nature and behavior of whole living cells; another is the investigation of substances extracted from them. This article will discuss only the second approach, but both are indispensable if we are ever to solve the problem; indeed some of the most exciting results are being obtained by what might loosely be described as a combination of the two methods.
Dissatisfaction - AMERICA'S GREATEST ASSET

Dissatisfaction – AMERICA’S GREATEST ASSET The electronic computer gulps algebraic equations and releases typed solutions at the rate of 10,-000 per minute. Men with vision created this machine that almost thinks, men who were dissatisfied with old fashioned methods. Computing machines have created one of the fabulous chapters in the history of American industry. A […]
Ad: Stout "hearts" for new Navy sub killers

To power America's first anti-submarine carrier aircraft that's equipped for both search and attack, the U. S. Navy looks to Lycoming for air-cooled engines. Patrolling endless seas in search of enemy subs . . . blasting them out of action with newest destruction devices . . . this Grumman S2F-1 "hunter-killer" depends on the stamina of twin Lycoming-built engines to keep it high and dry.
Atomic Felt

Who knew felt was such an important component in making atomic bombs? American makes science serve its customers It may surprise you to learn that American Felt Company keeps a Geiger Counter open in its Engineering and Research Laboratory. It is used to make sure no radioactive atomic particles from the atmosphere get into wool […]