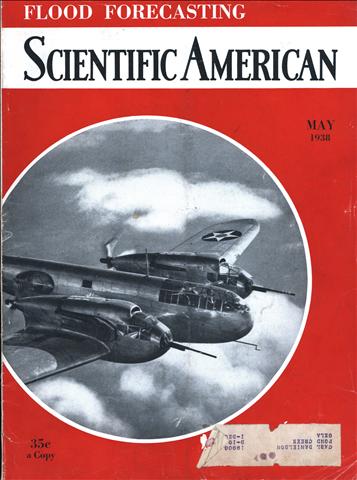 Color Names Cause Confusion... A New System is Being Developed to Bring About Definite Standards... Like Sections of Grapefruit By JOHN H. CRIDER IN an age when science reproduces with dazzling accuracy the myriad colors of nature, we are inclined to take color for granted. Until related colors are examined closely, side by side, or until someone disagrees with us over the description of a color, we do not worry much about color names. After all, "what's in a name?"
50 Years Ago in... Scientific American

(Condensed From Issues of May, 1888) COAL IN THE MAKING—"During the late violent storms in the Channel the sea washed through a high and hard sand hank near the Isle of St. Malo, France, nearly four meters thick, laying hare a portion of an ancient forest which was already passing into the condition of coal."
Number One Rocket Man

A Silhouette of the Shy Massachusetts Physicist Who Pioneered in Rocket Research . . . Much to His Distress He Broke into the Noisier Newspapers By G. EDWARD PENDRAY Past President, the American Rocket Society Editor of Astronautics ON a flat, dry plain, 18 miles north of Roswell, New Mexico, rises a 60-foot tower of steel that has roused more curiosity, and has probably had a greater influence on the future of the world, than any other feature of all New Mexico's arresting landscape. From this tower, at irregular intervals, a Massachusetts physicist and his assistants send roaring into the skies certain gleaming, cigar-shaped projectiles of metal, powered by gasoline and liquid oxygen, and landed by parachutes.
Man Can Now Talk With God

Says Noted Psychologist "A new and revolutionary religious teaching based entirely on the misunderstood sayings of the Galilean Carpenter, and designed to show how we may find, understand and use the same identical power which Jesus used in performing His so-called Miracles," is attracting worldwide attention to its founder, Dr. Frank B. Robinson, noted Psychologist, author and lecturer.
Cellophane is Born

By A. P. PECK 1. From forest giant to Cellophane is a long stride made possible by chemical research. For the manufacture of Cellophane, the Du Pont Company buys wood pulp—purified cellulose—in square sheets, soaks them in a caustic soda solution (above); the result is "alkali cellulose". 2. Damp alkali cellulose is shredded into small fluffy particles, aged for two to three days in order that later steps in production may be carried out successfully. Above: Unloading ground-up chemically treated cellulose from shredder.